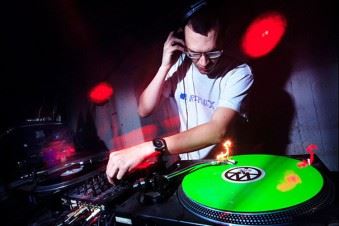 For longtime Rollins Band drummer Jason Mackenroth, all the world’s a stage and he digs being a player on it. He kicked off his latest gig – as tour drummer for the Blue Man Group “Megastar World Tour” – in February 2009 with the group’s sold-out show at The O2 in London and before the year’s out, he will have traveled to Taiwan, Portugal, Israel, Canada and numerous other countries. Some voiced surprise at his latest move – “I don’t know what that says about the state of punk-rock music,” lamented one critic – but it was, in fact, a natural step, for Mackenroth has a long history of aligning himself with artists who dare to push the envelope, irrespective of what genre they may fall into. Indeed, over the course of seven albums and four worldwide tours with Rollins Band (featuring singer/author Henry Rollins), Mackenroth found time to tour with GRAMMY® award-winning producer/artist Daniel Lanois and MC5 guitarist Wayne Kramer, record with George Clinton, The Lovemakers and Robert Bradley, and release six albums with Los Angeles-based power trio Mother Superior. Jason was born in Sacramento, California, where he played in a highly ranked DCI Drum and Bugle Corps. After moving to Los Angeles, he became a founding member of Mother Superior. The band attracted the attention of punk rock icon Rollins, who penned the liner notes to their debut album, The Heavy Soul Experience of Mother Superior (1996, Top Beat Records), and produced two of their subsequent records, Deep (1998, Top Beat Records) and Mother Superior (2001, Triple X Records). In 1998, Rollins asked the group to join him in the studio for what was slated to be a solo record. They wrote five songs together the first night and soon Mother Superior was doing double-duty as Rollins Band. In 2004, Jason stepped out from the shadows of Rollins Band to put together his own band, Mack. With Mackenroth on lead vocals and drums, Jacques Wait on bass and John Kuker on lead guitar, the trio delivered its self-titled debut, a commanding, visceral rock ‘n’ roll album, on indie label Wrecked Records in 2005. Tracks such as “Welcome Wasted Again” and “Going for the Thrill” garnered radio play on specialty shows from coast to coast and the band toured behind the album into 2006. Jason relocated to Las Vegas thereafter, where he earned a coveted spot as a band musician for Blue Man Group’s show at the Venetian and was tapped as the drummer for Platinum Productions’ “Rich & Famous,” Sin City’s hottest party band. Mackenroth, who is writing material for the next Mack album, jumped at the chance to join the Blue Man Group “Megastar World Tour.” The live rock show, which has played to capacity crowds in previous years, takes the audience through a satirical “workshop” on how to create “the perfect rock concert experience.” In the process, they celebrate, skewer and otherwise deconstruct rock stardom in all its narcissistic glory. And Mackenroth definitely considers that a worthy objective.