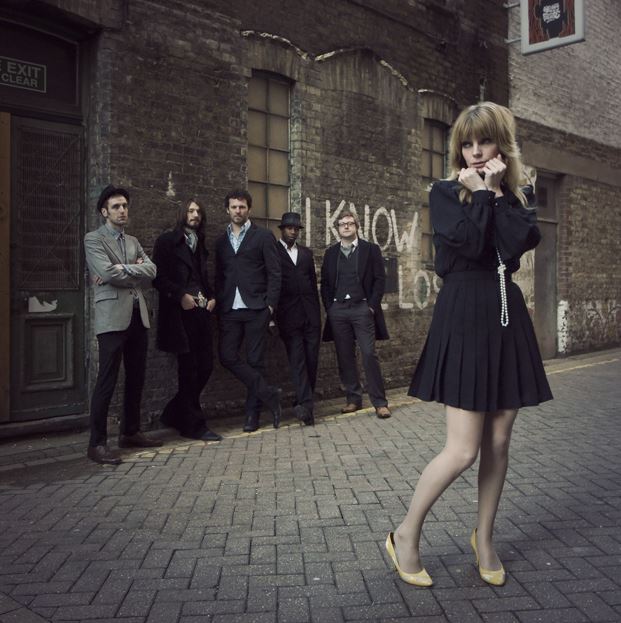 Lucky Soul are not just a six-piece pop group from South East London, they are a bag of contradictions. Their intricate, insanely addictive pop seems effortless but is painstakingly, meticulously crafted; and even when the second album A Coming of Age seems to speak of sweet, uncomplicated love, you’ll find it to be actually doused in heartache and existential angst. Think of the barbed lyrics of a latter day Brian Wilson run through a magpie-esque pop sensibility taking in Stax, Motown, Edith Piaf, Dexy’s Midnight Runners, The Arcade Fire, Scott Walker...
The first swirls of what would become Lucky Soul took place in Glasgow in the imagination of a sound engineering student called Andrew Laidlaw. Inspired by the classic Sixties soul playing at a tiny night club called Papa Cool, he began sneaking into the studios at night, plotting to take a seemingly lost kind of pop music and update it for the 21st century. When the course finished, he moved to London, recruited a few friends and put out a classified ad for a singer. A heartfelt request for “no divas, no faux-American accents” seemed to have little effect, but alongside 300 Aguilera-clones emerged a honey-haired woman by the name of Ali Howard with a voice perfectly poised between power and vulnerability and a look that seemed tailor-made for Laidlaw’s music.
The first Lucky Soul album followed in April 2007. Released on the band’s own label Ruffa Lane (set up with the financial help and know-how of a couple of close friends) The Great Unwanted was a massive critical and commercial success: greeted with 4 and 5 stars – “an immediate classic”, “pop at its most glorious and heartbreaking” – across the board and sold 50,000 records worldwide, picking up a top 10 hit in Japan along the way.
Laidlaw’s pop vision had been vindicated, but the band had also thrown everything at that first record. Once the touring was done and with no financial safety net to fall back on while the royalties came through, Lucky Soul returned to their normal lives. Not for the first time, Laidlaw found himself stone broke and south of the river. This time he had no choice but to live inside the band’s studio, then in a draught-ridden converted fire station on the gloomier side of Greenwich. He played piano til the early hours and showered in the local swimming pool, and put his heart and soul into creating a second album, going by his own admission a bit crazy along the way.
Turning down an offer from legendary Bowie producer Tony Visconti, the band opted to retain complete creative control. Laidlaw produced the record himself, only turning to outside help for the mixing sessions, handled in New York by Victor Van Vugt (Nick Cave, Sons & Daughters, Kirsty Macoll, PJ Harvey). Howard, Laidlaw and mercurial guitarist Ivor Sims were all that remained from the original lineup. Russell ‘Rusty’ Grooms and kiwi maverick Paul Atkins took the bass and drum briefs, and a new keyboardist was found in the form of Art Terry, a former protégé of Arthur Lee from Love who had initially just turned up to tune Laidlaw’s piano…
Months were spent in the studio, as Laidlaw – a synaesthetic to whom music appears in the form of vivid visuals that look “like an avant-garde Russian cartoon” – heaved his vision into awesome life. The result is a record with the gloves off, as trumpeted in the form of two advance singles Woah Billy! and White Russian Doll. The first album’s shameless love for pure melody remains, but any hint of knowing pastiche has been replaced with big, confident, lean production; it’s a soaring album of modern pop – music for a new decade.