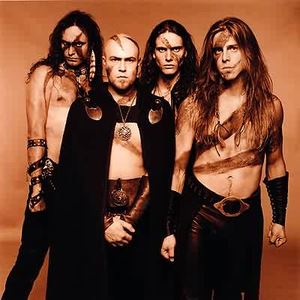 1) A swedish metal band
2) An acoustic-rock band from Ireland
3) A heavy metal band from New Jersey, USA.
1) Lost Horizon is a power/progressive metal band from Sweden (Gothenburg), although primary song writer Wojtek Lisicki is from Poland.
From 1990 - 1994 the band went under the name "Highlander". This band featured Joacim Cans on vocals, now with Hammerfall and other Hammerfall members. The band was then put on hold as several members left. It wasn't until the late 90s that the band reformed under the same name for a short while before changing it to Lost Horizon.
The band has a philosophical message for all of their listeners. Denying fate and believing fully in the power of will. Their music is uplifting and attempts to motivate the listeners to help them overcome fear and self doubt.
So far the band have released two studio albums. Awakening the World and A Flame to the Ground Beneath. The band are currently song writing and are in search for a full time vocalist as vocalist Daniel Heiman left due to musical differences and has formed a new band called Heed.
But before Daniel Heiman formed a new band called Heed he sang for a while in band called Crystal Eyes
WHAT'S THE STORY BEHIND DANIEL HEIMAN SINGING IN CRYSTAL EYES?
After twelve years and three studio albums as lead vocalist CRYSTAL EYES main-man Mikael Dahl felt it was time for a change. Up to the microphone steps former LOST HORIZON vocalist Daniel Heiman. At first Daniel was supposed to sing only two songs on the album CONFESSIONS OF THE MAKER, as a follow-up to his performance on the song THE WIZARD'S APPRENTICE from the album VENGEANCE DESCENDING. A couple of months before the recordings for CONFESSIONS OF THE MAKER were about to begin Mikael learned that Daniel had left LOST HORIZON, and directly discussed the matter with the band who decided to approach Daniel about taking over the lead vocals in CRYSTAL EYES. Daniel and Mikael have known each other since the early '90s when they played together in a band which mainly covered ACCEPT songs, and with a common ground like that it was an easy decision to ask one of the best singers in the world if he wanted to jump on the train. Daniel was very positive about singing in CRYSTAL EYES, but also made clear that when he quit LOST HORIZON he'd set his mind on spending more time on other things, and that singing on the album and upcoming gigs would be his only engagement in CRYSTAL EYES.
After finishing the recordings of CONFESSIONS OF THE MAKER Daniel formed the new band HEED with his old LOST HORIZON mate guitarist Fredrik Olsson. When they then relatively soon signed a productions deal Daniel's focus was completely on HEED. Of course CRYSTAL EYES hoped to make more than one album and one gig at SWEDEN ROCK FESTIVAL with Daniel when first deciding to work with him, but writing and recording his own music had been Daniel's goal for quite some time.

LOST HORIZON BIOGRAPHY:
The old Millennium reaches it's end. The year is 1998. A sudden mighty gust of the Metal wind fills up the hearts of the three pure ones. Wojtek, Martin and Christian are their names.
That sacred call, that final cry, breeds a spiritual aspiration, which leads to the great gathering of the three.
Under a prodigious influence of the same, shared flame, baptised in Metal and the restored will, they interlace their faiths and conclude their goals. Transcendental Protagonist, Cosmic Antagonist and Preternatural Transmogrifyer are born.
During two years, the reunited companions consequently prepare a great manifestation for the world - their first album of power. About a year later, when the adjusting of the thoughts is almost finished, another shape turns up on the horizon. The singer Daniel joins the brave ones, embellishing the music by his divine voice. Shortly thereafter, two demonstration songs are recorded. Also he, listening to his deepest ego, finds his real identity. The new, fourth warrior is born. His name is Ethereal Magnanimus.
In June 1999, the demonstration CDs are sent out to several record labels. By the end of the summer, the formation receives very positive feedback and interest from most of them. Yet, only one of them proves itself worthy enough. It's Music For Nations. In March 17th, 2000, both parties finally signs a covenant, and the collaboration begins. Shortly after, a music studio is entered and the recording begins. Like in a trance, with no rest and no mercy, from late March through mid August, the album "Awakening The World" is being created. Only the walls of the several studios know the pain and the suffering that is being experienced. But nothing can stop this enterprise.
And now the work is finished. The first ritual is over. The second begins. And out of nowhere the fifth and the sixth warrior are on their way to take their place at the round table, where two of the thrones that surround it have been waiting to be ascended. The new dawn is born and is here to stay. Once lost. Now brought back.
The LOST HORIZON.
The blasting hammer of might – ‘Awakening The World’ – shakes the foundations of Heavy Metal. The band does around two hundred interviews and gets raving reviews from all over the world. 20.000 records are sold after only a few months, without even touring! They establish a solid found among like-minded around the globe, united by the power of will, the endless love to music and the spiritual equality.
During the following year Lost Horizon plays a number of gigs around Europe and appears on several major festivals, headlining several of them, attracting even trans-global fans from Japan and Australia to their concerts.
A die-hard fan base is growing.
In early 2002 the winds of magic returns. A strong hunger to create once again proves to be a natural element in their lives. In January the same year, the second journey begins and material for yet another album is being written.
The recording of the ever so anticipated follow-up to ’Awakening The World’ is then finally commenced in May. Immense work, palpable magic. Lost Horizon’s second album is born.
The second ritual is over. The brave ones prepare themselves for the forthcoming conquering. There are still thousands of lost souls that desperately look for strength inside them, not finding it so bound by doctrinal society.
Unmistakenly, the musical style of the new album is purely Lost Horizon’s. There has been further evolution of the entire entity. The music is now more dynamic, epic, grandiose and illustrative, with much more room for emotional travels. Also the lyrics have taken another leap forward in development to become even deeper. The bands’ ideology is being crystallized more thoroughly. The second storm is here!
Band members
Transcendental Protagonist (Wojtek Lisicki) - Guitars (Luciferion, Against The Plagues)
Cosmic Antagonist (Martin Furängen) - Bass (Luciferion)
Preternatural Transmogrifyer (Christian Nyquist) - Drums
Perspicacious Protector (Attila Publik) - Keyboards
Official former members
Etherial Mangnanimus (Daniel Heiman) - Vocals (ex-Fierce Conviction, ex-Crystal Eyes, ex-Destiny (Swe), Heed)
Equilibrian Epicurius (Fredrik Olsson) - Guitars (ex-Destiny (Swe), Heed)
Discography
Awakening the World - Album (2001)
Awakening The World - The sampler - Single (2001)
Cry Of A Restless Soul - Single (2003)
A Flame to the Ground Beneath - Album (2003)
2) Lost Horizon is an acoustic-rock band from Dublin, Ireland. Lost Horizon was formed in February 2007 by singer Rafal Kasprzak (Poland) and guitarist/songwriter Javier Ramos (Spain). In May of the same year the band decided to start recording a demo CD with a few of the songs that they had been playing. The self titled demo was released at the end of July 2007. In April 2008 they released their second demo “The Road Back Home”. In 2009 "The Distant Sun" demo was released.
http://www.myspace.com/losthorizonband
http://sites.google.com/site/losthorizonband/
3) Lost Horizon were a metal band from New Jersey, who contributed the song 'Troubled Ways' to the 'Metal Massacre VII' compilation.