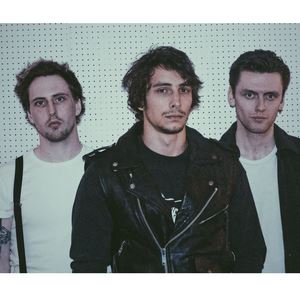 There are ten Looms, generally characterized by their near-subterranean internet profiles:
1.) The band from Salt Lake City, Utah. "Loom formed in August of 2006 by former members of: the hi fi massacre, her candane, trojan, michigan, less than never, illborn, jetliner headache, part 2, the new transit direction, i am the ocean, harmon's heart, and farewell my enemy. We released our first EP, "angler," on exigent records in march. We are currently working on touring our asses off and writing for a full length we plan to release next spring. also, this fall we're droppin' a split 10" with Prize Country from Portland, Oregon whom we've been on tour with for the past few months. thank you to anyone who listens to our music, comes to shows, helps to promote us, buys or sports any of our merch, puts our banner or song on their page, or helps us in anyway. people are nothing without people."
2.) A German IDM artist. He startet making electronic music in 2003, pretty much inspired by artists like Boards of Canada, Aphex Twin or Matmos. Beyond that he was always trying to get a more warm and natural sound by using a lot of natural sound samples. His first album "Plastic Meadows" came out in 2006 and was the result of these both sides of musical impression. His second album "Coffee for the Kids" had a different concept. The idea was to figure out a very childish way of making music. It came out self published at first, and then on acroplane records a year later. After this he changed his artist name to Kinskop . A first EP under that alias will come out soon.
All of Loom's Records where published under Creative Commons.
So, it's all for free... just check out http://www.myspace.com/fruitsofloom or http://www.myspace.com/kinskop for future releases.
3.) An Australian electropop/mixed media crossover duo from Canberra, Australia. Formed in 2005 as a temporary support act for the Kevin Blechdom and Captain Ahab tours, Loom have mysteriously continued on. Their sound is characterised by oblique lyrics, copious sampling of global musics and field recordings, and cheezy beats. Live shows are notable for used of mixed media, preparing elaborate collages and paintings in the course of their shows, choreographed dancing, and the use of circuit-bent toy instruments. Their main website is reverbnation.com/loom, and they have the inevitable myspace page.
4.) A Swedish Indie band founded in 1993 from Kalmar that released their first album 2006 named "Not Even A Thousand Years Would Be Enough". Inspired by bands such as The Cure, My Bloody Valentine and Joy Division.
5.) An Estonian hard rock band. Their middle-finger attitude towards everything and everyone is synthesized into wall-crushing metal music that has been very successful and gathered hundreds of fans in Estonia and even Latvia. Since 2000 they have made a number of different concerts “moshable” and shared stages with such bands as No Big Silence, Pedigree, J.M.K.E., Forgotten Sunrise, Blind and their good colleagues from Latvia – F[EI]K. In 2001 Loom got promoted with an award “Best Young Band Of the Year” and a year later with "Golden Record 2002" award in the category of the best new-comer of 2001. All this progress has led to Loom’s first studio record, which is going to be released very soon.
6.) a songwriter from Charlottesville Virginia named Craig Jones. Check out his music here. Craig was a member of the Boston band Sydra, which also featured members of Syrup USA and Victory at Sea.
7.) Polish Progressive Rock Band
8.) A Songwriter/Rock/Soul band from eastern Switzerland which has its roots in the 1990, when Manu Olowu (vocals, songwriting, guitar, calimba) frequently made music with Jo Eberhard (guitar, mandolin). Over the years they found further musicians, as Mario Söldi (drums, percussion, vocals) and Zachi (bass), who finally completed the band. In 2009, they published their first studio record "Underneath".
9.) A singer-songwriter from Toronto, Canada named LOOM/Brooke Manning "A singer-songwriter from which we can draw inspiration, sculpting images of lyrical dreams, fragile vocals, eyes closed, digging deep into soulful introspection.... like being graced by an earthbound angel providing musical joy. A warm, wistful spirit, demonstrating that minimal continues to be timeless and beautiful." -- Excerpt taken from CBC Radio. Songs on the LOOM Myspace page.
10.) Loom is a project by ex. Tangerine Dream members Johannes Schmoelling and Jerome Froese. The third member is Robert Waters.
Johannes Schmoelling and Jerome Froese are well known to the public as longtime key members of electronic legend „Tangerine Dream“ and for their highly rated solo albums.
Robert Waters already did a remix (in collaboration with Ulrich Schnauss) for the reissue of Johannes Schmoelling's solo album „White Out“ a few years ago and is one of Berlin's busiest producers.
The idea to collaborate already came up in late 2008 but due to a lot of issues it came to a standstill several times. But finally things have changed fundamentally a few months ago when Jerome asked Johannes for a co-op on his next solo album called „Far side of the face“ which turnend out to be a very fruitful experience. Loom will have their first concert on the 15th October 2011 at The Enck Theatre, near Eindhoven (Netherlands/Holland)