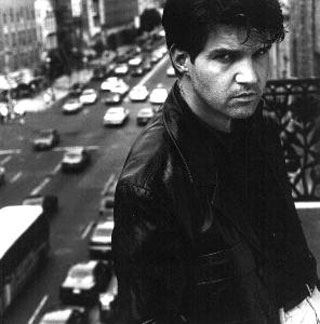 Born January 31, 1961. An English-born singer and songwriter, known for his role as lead singer of Lloyd Cole and the Commotions from 1984 to 1989 and for his subsequent solo work.
He was born in Buxton, Derbyshire. He grew up in nearby Chapel en le Frith and went to New Mills Grammar School. After failing in law at University College London, he later attended (but did not graduate from) the University of Glasgow, where he studied philosophy and English and met the other members of The Commotions. Their 1984 debut, Rattlesnakes, contained numerous literary and pop culture references to figures like Norman Mailer, Grace Kelly, Eva Marie Saint, Truman Capote and Joan Didion. The group produced two more albums, Easy Pieces and Mainstream, before disbanding in 1989, when Cole re-located to New York to record with legendary musicians like Fred Maher and Robert Quine (as well as a then largely unknown Matthew Sweet).
This solo setting produced two acclaimed albums, Lloyd Cole in 1990 and 1991's Don't Get Weird on Me Babe. The latter was recorded in two parts: one side continued the New York rock mastered on his first solo album, while the other side featured a session orchestra, much in the style of Burt Bacharach or Scott Walker. Although some reviewers have claimed Don't Get Weird on Me Babe (the title being a quote from the American neo-realism poet Raymond Carver) to be a creative peak, it produced significantly lesser record sales, and the contract with Capitol Records ended.
Now signed by Rykodisc, Cole continued redefining his sound with Bad Vibes (1993), a collaboration with producer/remixer Adam Peters using a harder, grunge and psychedelica inspired sound. Love Story (1995) established stripped-down, largely acoustic sound landscapes with the help of Stephen Street (famous for his work with Blur and The Smiths) and former Commotions Neil Clark and Blair Cowan; the album produced a minor hit with the song "Like Lovers Do".
In 2000, after years without a contract, Cole recorded a disc with the New York band The Negatives, featuring Jill Sobule and Dave Derby of the Dambuilders. He has since released solo albums on smaller independent labels. Sanctuary Records, the company responsible for the revival of Morrissey, released Music in a Foreign Language (2003) in the U.K. Recorded largely by Cole himself (including tracks recorded directly into a Mac), the songs had a stark, folk-inspired singer-songwriter style. One Little Indian, home of Björk, released Music in a Foreign Language in the U.S.; they also collected a number of outtakes (recorded from 1996 to 2000) on 2004's Etc. and released an instrumental ambient electronica album, Plastic Wood, the same year.
Cole is constantly on tour, playing intimate club venues in a one-man acoustic setting. However, in 2004, to mark the 20th anniversary of the release of Rattlesnakes, Lloyd Cole and the Commotions reformed to perform a one-off, sell-out tour in the U.K. and Ireland. An avid golfer, he is also known for playing concerts in towns suspiciously close to famous golf courses. He also shares a passion for this sport with Alice Cooper who is said to introduce the song "Only Women Bleed" claiming "not even Lloyd Cole has written a song about menstruation" when playing live.
Cole's latest album "Antidepressant" was released in 2006 featuring the former Commotions guitarist Neil Clark on some tracks.