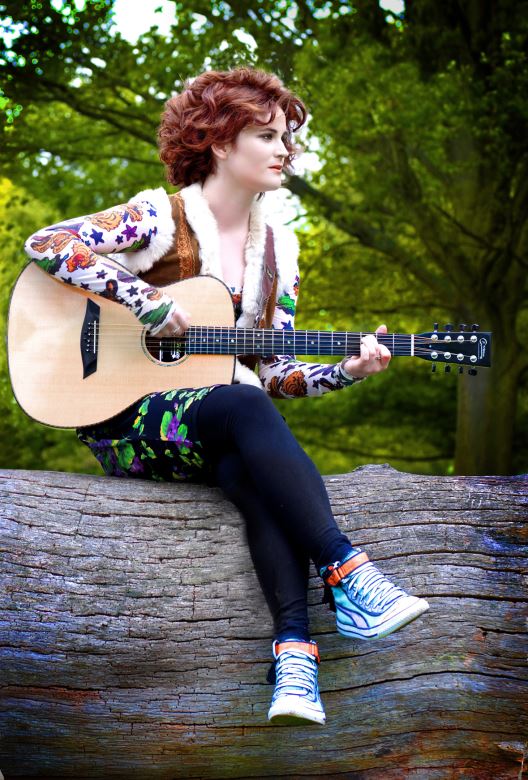 “Bound for glory…an exquisite slice of traditional songwriting” – The Times
Lisbee Stainton, the London-based 22 year-old singer-songwriter known as, ‘The English Rose With The 8-String Guitar', has been writing songs for almost 13 years. She graduated only last year from Goldsmiths University with a degree in Popular Music and already with her first album under her belt, ‘Firefly’, in which she collaborated with Guildford-based producer, Rain. You can find it on itunes or Amazon.
Lisbee originally launched her career four years ago, when she became the first unsigned singer-songwriter to play London's O2 Arena, performing to a 30,000 strong audience. However, it was when BBC 6Music DJ Tom Robinson asked Lisbee for a copy of ‘Red' after hearing it on Lisbee's MySpace page that the ball really started rolling. Describing Lisbee on air as “a serious young talent”, it was Robinson’s subsequent support which led to her single, ‘Red’ eventually being playlisted at BBC Radio 2 in January 2009: only the third ever unsigned artist to be Radio 2 playlisted after Katy Melua and Eva Cassidy. Both of her next two singles, 'Just Like Me' and 'Never Quite an Angel' where subsequently play listed on Radio 2 as well. That support from Tom has continued ever since, with Lisbee returning to play a live session on Tom’s show in April 2009: in Tom’s words “Wow! Sensational! Absolutely Mint!' The success of ‘Red’ subsequently saw Lisbee making numerous radio & TV appearances, including live sessions on BBC Radio 2, BBC 6music and BBC Hereford and Worcester, as well as being tipped in the press as ‘one to watch for 2010’.
In January, Lisbee released her album, 'Girl on an Unmade Bed'. Produced by Rupert Christie (U2, Greenday, Lou Reed, Echo and the Bunnymen) & recorded at Abbey Road, the album has already received a series of great reviews in publications such as MOJO, Uncut Magazine, The Independent on Sunday, the Daily Express and The Mirror, had GMTV announce Lisbee a star in the making, and had The Times declare, "Bound for Glory - Lisbee Stainton and her eight string guitar....an exquisite slice of traditional songwriting: pure and pitch perfect."
Lisbee's single, 'Just Like Me' was the Record of the Week on the Radcliffe and Maconie show on BBC Radio 2 in April 2009 and is available to download from itunes and other music downloading websites, alongside her most recent single, 'Never Quite an Angel', released in January and playlisted on BBC Radio 2 for 6 weeks.
From March to July 2010 Lisbee completed a four month support slot around the UK and Europe for Joan Armatrading as part of her world tour. Subsequently, the end of April saw Lisbee Stainton perform a live session for BBC Radio London's Robert Elms Show, and in May 2010 BBC Radio 2 broadcast a live recording of Lisbee's set, originally recorded at Bristol's Colton Hall during the Joan Armatrading tour, as part on their ‘In Concert' series. In early July Lisbee appeared alongside stars such as Katie Melua and Judy Garland on a new compilation called ‘Latest and Greatest Women of Song', released on Union Square Records, and in August she was the support act for Belgian pop star Tom Dice on his tour of Germany.
Currently she has just completed her own Headline tour around the UK, Europe and Scandinavia, meaning that Lisbee Stainton will have spent over 6 months of 2010 on tour, with over 120 shows this year, firmly establishing her as one of the UK's brightest - and hardest working - songwriting talents.
Lisbee is now starting to work on her third, yet to be titled album, which will be ready to release in September 2011!
Watch this space...
This one.
“Fresh as a daisy in summer, Lisbee Stainton will be a big hit with a cross over audience. She could become the ultimate UK singer/songwriter talent of the past ten years.” - Classic Rock Society Magazine
“Lisbee Stainton’s appeal is clear and simple: slowly revolving rhythms, wistful English melancholy with a soulful undertow, and a sweet folk-pop voice.” - Mojo
“Lisbee Stainton - Radio 2 favourite multi-faceted debut.” - Uncut
“Lisbee Stainton’s homely pop is a style of music that suits the times like a twill, as effective in the kitchen as it is on a television advert.” – The Independent on Sunday
“Check it out, great songs, lovely playing and vocals, and the distinct possibility that Lisbee will follow in the footsteps of some of the best female singer songwriters these shores have produced...” – Get Ready To Rock
“Lisbee Stainton is currently the darling of Radio 2 and BBC 6, and it is easy to hear why.” – The Scottish Sunday Express
Visit www.myspace.com/lisbeestainton for news about gigs and general updates on what Lisbee's up to!
Check Lisbee out at www.lisbee.com
Lisbee Stainton is published by Hornall Bros Music. All rights reserved by Marionet Music and Marionet Records.