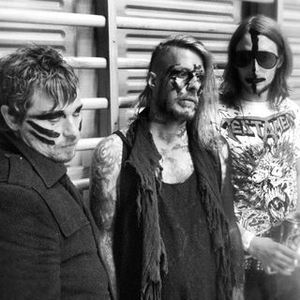 There are at least 13 artists with this name:
1) Traditional heavy metal band from New Haven, CT
2) NWOBHM band from Jersey (Great Britain)
3) NWOBHM band from Kent (UK)
4) British pagan progressive rock band
5) Heavy metal band from France
6) Heavy metal band from Soeul (KOR)
7) Heavy metal band from Montevideo (URY)
8) Hip hop/rapper from Long Island, NY.
9) Deathcore/hardcore band from Saginaw, MI
10) Legend was a Christian hard rock band who later changed their name to "Legend Seven."
11) Electronic / demo scene musician from Finland
12) Electronic / goth pop duo from Iceland
13) Heavy metal band from Lasi, Romania
1)The American Legend hails from New Haven, CT. They are an Epic Traditional Heavy Metal band who formed in 1978. They recorded and released a single album on the record label Matrix called “From the Fjords” (1979). Their music deals with myths and viking lore/stories. They are now split up.
Lineup:
Fred Melillo - Bass
Raymond Frigon - Drums
Kevin Nugent - Guitars, Vocals (R.I.P. - 1983)
There are 500 officially pressed copies of the 1979 release, although myriad bootlegs have been created over the years. It was never released on CD. “From the Fjords” remains today as one of the most sought after albums ever.
Kevin and Fred played previously in a band called Edge in 1977-78. Monster Records is re-releasing Legend’s ‘From The Fjords’ album.
2) Jersey Legend released the full-length albums “Legend” and “Death in the Nursery” in 1981 and 1982, respectively. They also made an EP “Frontline” in 1982. In 2002 their back-catalogue was reissued on the double disc set Anthology and a comeback album called “Still Screaming”was released in 2003. After ten years, their new album ‘The Dark Place’ was released in April 2013. http://www.legendjersey.com/
Band members:
Guitar - Pete Haworth
Vocals - Mike Lezala
Bass - Eggy Aubert
Drums - Dave Whitley
3) Formed in 1979, the Kent (UK) legend is now split-up, having released the single “Hideaway / Heaven Sent” in 1981.
4) British pagan progressive rock Legend released three albums in the nineties, and were hugely influential with the Pagan scene as well as being very respected in Japan were they sold well. In many ways they were ahead of their time, combining operatic vocals with symphoni music in a way later adopted by bands such as Nightwish. Keyboard player Steve Paine ran the Pagan Media record label and along with live engineer Jon Moreau produced bands such as Incubus Succubus, Mr So & So and The Rattlers among others.
The band reformed in 2010 with Steve Paine and drummer John Macklin bringing in the original singer (pre any album releases), as well as guitarist Dave Foster who had worked with Steve a great deal over the years as he is a founder member of the So & So's. Rejuvenated they released the new studio album 'Cardinal Points' in April 2011, as well as making available a CD of the music from their live 1992 video 'Playing With Fire'.
9) Legend are a deathcore/hardcore band from Saginaw, Michigan signed to Rise Records.
In today’s metal scene, most bands don’t have the backbone needed to exhibit what real heavy music is all about. Detroit, Michigan’s LEGEND isn’t most bands. The sheer magnitude of LEGEND’S furious sound is so uncompromising and so monstrous you’ll be checking under your bed for circle pits before you go to sleep at night. LEGEND are on a path of devastation that will leave the naysayers wishing they hadn’t second guessed just how severe this mid-western five piece truly is. Fronted by Chad Ruhlig (For the Fallen Dreams), LEGEND has no qualms calling themselves just what they are; Legendary

10) Legend Seven was a Christian hard rock band formed in the early 1990s (formerly with the name Legend) by three former members of Ruscha, another Christian band from the 1980s.
The band made its debut in 1990 under the name "Archon" on a compilation disc released by Heaven's Metal magazine, with a self-produced version of "After The Fall." The song was re-released on the band's self-titled debut album, Legend, in 1991 on Word Records. Shortly after, the band was forced to change its name to Legend Seven upon learning that another band was already using the name Legend. They released Blind Faith in 1993.
Both albums were produced by Grammy Award-winning producer Bubba Smith and garnered several hits on Christian radio ("Carry Me", #4, 1992; "Angela", #2, 1992; "Be Still", #1 for 2 weeks, 1994; "Blind Faith", #1 for 2 weeks, 1994; "First Love", #10, 1994; "Call on Me", #15, 1994). The band disbanded in 1994
Band Members
* Andy Denton - vocals
* Michael W. Jacobs - guitar, background vocals (now solo artist. See www.sacrednation.com)
* Randy Ray - bass, background vocals
* Billy Williams - drums, percussion, background vocals
Later touring members
* Greg Wilson - guitar, background vocals
* George Nicholson- keyboards, background vocals
Discography
* Legend (1992) - released under the band name Legend.
* Blind Faith (1993)
13) A heavy metal band from Romania