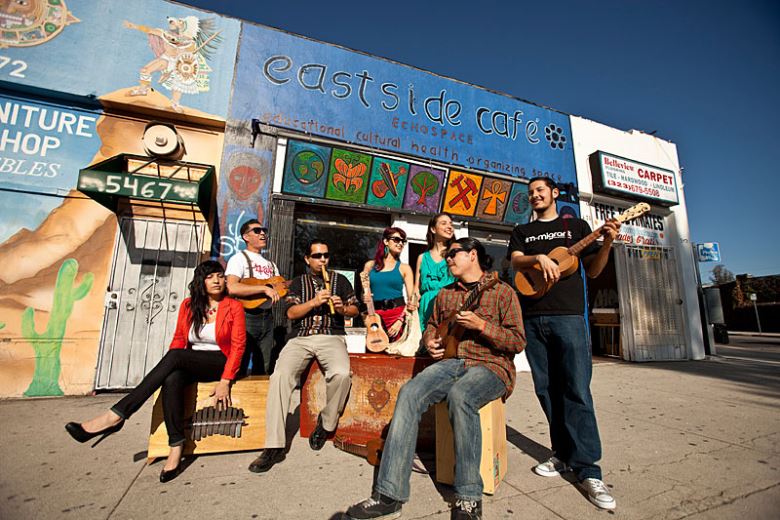 Las Cafeteras says it knows — and you know — 'It's Time'
Las Cafeteras, the dynamic L.A. son jarocho band, releases 'It's Time' on Tuesday, and it includes 'La Bamba Rebelde,' a timely take on a classic.
October 27, 2012|By Reed Johnson, Los Angeles Times
The new interpretation of "La Bamba" sung by the dynamic young L.A. band Las Cafeteras isn't your abuelito's version of the classic Mexican folk tune. Nor is it Ritchie Valens' 1958 hit rendition, or Los Lobos' smash 1987 remake.
So what's different about Las Cafeteras' "La Bamba Rebelde" (The Rebel La Bamba), which appears on the group's just-issued CD "It's Time"? For starters, there are the punchy, quasi-hip-hop vocal cadences that overlay the traditional instrumental matrix of 10-string jarana and four-string requinto guitars known as son jarocho.

Then there are the very L.A., very timely lyrical updates. "It's the rebel 'La Bamba' that I will sing because we are Chicanos of East L.A., ay, arriba!" the brassy lead female vocalist declares on the track. "I don't believe in borders! I will cross them!" Moments later, a male singer gives a proud shout-out to his San Gabriel Valley roots, while yet another voice chimes in to denounce "leyes racistas" (racist laws).
MUSIC REVIEWS: The latest album and live reviews
That kind of politically cognizant attitude-to-burn propels "It's Time," which will be released digitally on Tuesday.
"I think music has to be relevant," jarana player Daniel French said during a recent interview with his colleague Annette Torres, a marimbol and zapateado percussionist, at the Cafe Tropical in Silver Lake. "And I think our goal is how do we write music that's relevant to what we're seeing and we're hearing."
Respecting tradition while opening space for innovation is the mantra of Las Cafeteras, a bilingual ensemble of three women and four men, all in their late 20s or early-to-mid 30s, whose music blends ska, punk, hip-hop, marimbol, spoken-word and urban-contemporary elements with the rich heritage of son jarocho, the Afro-Caribbean-influenced folk genre from the southeast Mexican state of Veracruz.
The group, which has opened shows for Lila Downs and took part last August in the annual Encuentro de Jaraneros jarocho festival in downtown L.A., will be part of the musical lineup at Saturday's Dia de los Muertos ancestor-worship celebration at the Hollywood Forever Cemetery. They'll be performing at the noon to midnight event in rotation with the bands Ozomatli, La Santa Cecilia, Very Be Careful and Tribu.
Upcoming concert dates for the band — whose other members are Denise Carlos (jarana segunda, voice), Hector Flores (jarana tercera, voice), David Flores (requinto), Leah Rose Gallegos (vocals, quijada del burro, a.k.a. donkey jawbone) and Jose Cano (Native American flute) — include November shows in Ensenada, Tijuana and San Diego and a slot in March at South by Southwest.
In keeping with jarocho's slave-music origins, Las Cafeteras has maintained its sharp political edge. That perspective stems in part from the band's 2005 genesis as a group of student-friends who took son jarocho classes together at the Eastside Cafe in L.A.'s El Sereno neighborhood, and were inspired to use their music as a story-sharing, community-building, teaching tool.
"Our CD is called 'It's Time' because we live in urgent times," French said. "And we didn't say what it's time for, because you know what it's time for — you know and I know. You know what you're supposed to do, and we want you to do what you're supposed to do. And we're doing what we're supposed to do. And when everybody does that, the world, it's already changing but it's going to come quicker."