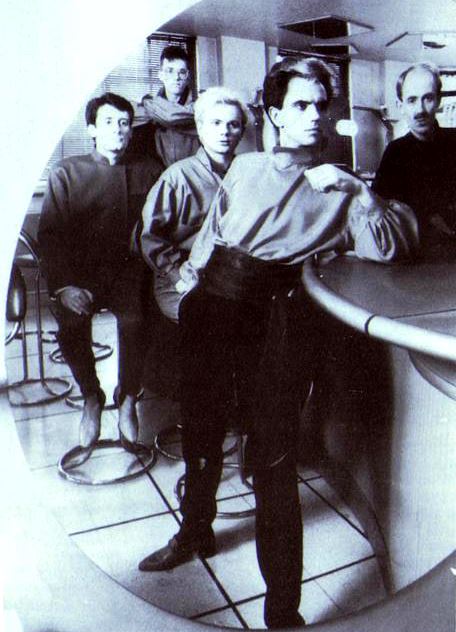 There are multiple artists named Landscape: 1) A rock band England. 2) A pop rock band from Argentina. 3) A darkwave project from Sweden. 4) A post-rock band from France. 5) A pop rock band from Japan.
1) Landscape is a a British band best known for their 1981 hits "Einstein A Go-Go" and "Norman Bates". Formed in 1974, they toured constantly during the mid to late 1970s, playing rock, punk and jazz venues and releasing two instrumental EPs on their own Event Horizon label. They began experimenting with computer-programmed music and electronic drums in the late 1970s making records in the emerging genres of electronic dance music and synthpop. Richard James Burgess produced Shock and the first two albums by Spandau Ballet while still in Landscape. He went on to produce recordings by Five Star, King, Adam Ant, America, Colonel Abrams, Kim Wilde, Shriekback, Living in a Box, Tony Banks, Fish, Princess, Jackie Graham, Praise, XC-NN (under the pseudonym Caleb Kadesh), Rubicon (under the pseudonym Caleb Kadesh), and many others. He wrote the book The Art of Record Production subsequently updated to The Art of Music Production (pub. Omnibus Press) and now in its third edition. Burgess is credited with coining the term 'New Romantic' encompassing the early 80's British music, club and fashion scene; and with conceptualising and designing the first electronic drumset the Simmons SDS-V. In 1983, Peter Thoms and Chris Heaton left the band, leading Burgess, Pask and Walters to rename the band Landscape III. This version of the group put out two singles before breaking up later that year. John Walters (aka John L. Walters) went on to produce records by Swans Way, Kissing the Pink, Twelfth Night, The Mike Gibbs Orchestra and Mark Springer. He co-founded Unknown Public in 1992. Members included Richard James Burgess, Christopher Heaton, Andy Pask, Peter Thoms and John Walters. Myspace page: https://myspace.com/landscapeofficial
2) Landscape is a band from Argentina. They started performing Oasis' covers. On November 22nd, 2002, Landscape performed their first show at the “Sala La Cooperación” concert hall, which was attended by a crowd. Throughout this show, the band demonstrated its esteem for Britpop music, and how the best and most representative Britpop band of the last decades has influenced them. At first, Landscape were introduced as a cover band, but their passion and devotion for Britpop went further than that. Landscape started to write their own songs, still influenced by Oasis, but bringing new nuances to their music.
Many line-up changes happened until the current lineup was formed. This achievement has encouraged them to go on and attempt new challenges. The current members of the band are: David Milone (lead vocals), Emanuel Hernández (lead guitar, backing vocals), Hernán De Munno (rhythm guitar, harmonica, backing vocals, lead songwriter), Fernando Manzanero (keyboards) and Federico Toscano (drums). Myspace page: https://myspace.com/landscapenet
3) Landscape was a project from Sweden, founded in 1994 by Anders Hill. He played a sort of darkwave / atmospheric synth music with black metal elements. Releases include "A Trip Through a Monotonous Atmosphere" (1994), "Drama" (1995), "Grey Empire - Shadowsoul" (1995) and "In the Stillness Calm" (1996).
4) Landscape is a band from France. The group is composed and directed by Guillaume de Chirac, with musicians from the French bands Overhead, Sébastien Schuller. The adventure started in September 2004. The line-up can change at each album or concert. The only permanent musician is Guillaume de Chirac. With their debut album, "One", released in France on March 2006 (label "Square Dogs"), they immediately went essential like one of the major bands of the French post-rock scene. For the second album "With a little help from my friends", released in March 2007, Guillaume has invited a lot of musicians from the French indie rock scene as Syd Matters, Arman Méliès and Nicolas Leroux on vocals. Horns, violins and flutes can also be heard. The album is more folk, pop and classical than the first one. Recorded in Paris between October 2006 and February 2007, fifteen musicians participated to it. The band released their third self-titled album in 2011. Myspace page: https://myspace.com/landscapeone
5) Landscape is a pop rock band from Japan. They released their first CD titled 「 」 in July 2011. The band actively tours and in October 2012, released their second CD, a mini-album titled 「earth」. Current members are 伊藤達也 [Tatsuya Ito] (vocals, guitar), 葛本史明 [Fumiaki Kuzumoto] (bass, choir), 後藤智 [Satoshi Gotou] (guitar) and 松井秀己 [Hideki Matsui] (drums).