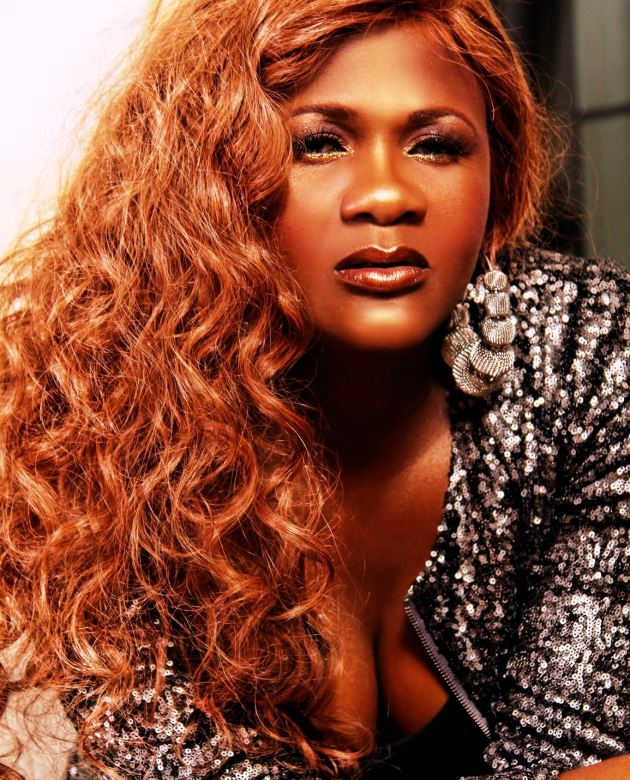 Lady Saw (born Marion Hall on 12 July 1972) is the stage name of Jamaican reggae artist, known as "the First Lady of Dancehall". She is the first female deejay to win a Grammy Award and to be certified a triple -platinum artist. She is also the first woman to headline dancehall shows outside her native Jamaica.
Marion Hall was born in the summer of 1972 in Galina, parish of Saint Mary. As a child she was a tomboy, sold fruits, and raced wooden karts. At the age of 15, she took the name Lady Saw after the famous Jamaican Deejay Tenor Saw, whose style she was said to emulate. She quit a sewing job at The Free Zone on the outskirts of Kingston;“That job wasn't for me”, she says. “I would deejay at work during the day.” to pursue music fulltime. She was soon signed to the then small Jamaican label VP Records (now a major label for many reggae artists). She debuted in 1994 with "Lover Girl". She was a guest vocalist on the Jermaine Fagan track, "Life" and it was this track that brought her vocals to the attention of a wider audience.
Hall is mother to three adopted children, two sons and one daughter.She touches on the issue in the lyrics of "No Less Than a Woman (Infertility)", a song from her 2007 album "Walk Out".
Lady Saw's first success began at the beginning of the 1990s. While lyrics about guns and masculine themes dominated the dancehalls of West Kingston, she sang sexually explicit lyrics, known as "slackness", from her perspective as a female. Recording for the local Diamond label, she released early hits like "If Him Lef" and "Stab Out de Meat", which was often met with mixed reaction by audiences. At that time, she also became known for her raucous stage shows, which usually included picking men from the audience (or sometimes her own band members) to pull on stage and to simulate sex acts with.
Due to her penchant for outspokeness and what was considered vulgarity, she was banned from many events due to her lyrics. Male contemporaries of Lady Saw were performing similar lyrics and stage shows, but as a female, Lady Saw endured censorship and even outright banning in more than a few Jamaican parishes. She continued to be outspoken though, and often addressed controversial topics such as unfaithful lovers, female degradation, and safe sex in the wake of the emergence of AIDS (with her single "Condom"). This song was featured on her second album "Give Me The Reason." Subsequent hits like "No Long Talking", "Sycamore Tree", and "Find a Good Man" further fueled her success as Jamaica's most prominent female deejay. These also were the first songs to gain exposure in the United States, especially in cities with large with Caribbean populations such as New York City and Miami.
Lady Saw has also collaborated with her male and female peers on several tracks: with Beenie Man on tracks such as "Healing"; with Sean Paul on "Bossman"; with her protege Dancehall vocalist Ce'Cile on "Loser"; and with long-time friend and peer, Tanya Stephens on "Bruck Dem Up"; as a guest on Papa Dee's "Hottie Hottie Girls". Two singles, "Still Convinced" and "Too Abusive", were mixed by music producers Soundism.[3] She has also worked with artists outside of the dancehall genre: Missy Elliott, Eve (rapper), Lil' Kim, Vitamin C and Foxy Brown. In 1999, Lady Saw released the album "99 Ways." The album features such popular songs as "Don't Even Stress Dat", "Hardcore Lover", "Money Money" & "99 Ways."
After a 6 year hiatus, in late 2004, she released Strip Tease. It has been called her most balanced and well-written album yet. "I've Got Your Man" had significant video and radio airplay in the U.S and peaked at #85 on the Hot R&B/Hip-Hop Singles and Tracks chart. The albums' second hit was "Loser" feat. Ce'Cile.
In 2005 she produced a version of Gregory Isaacs' Night Nurse with her toasting over the original lyrics.
In 2007, she released "Walk Out". The album debuted at number 8 on the Reggae Albums chart. The singles "Infertility" and "Chat To Mi Back" were well received. In 2010, Lady Saw released her eighth studio album, "My Way." The album was her first release on her own record label, Divas Records in partnership with Toasting Music. The albums' single was entitled "Party Til December."

In November 2012, Lady Saw announced that she was turning her back on dancehall and would be concentrating on Gospel music in future.