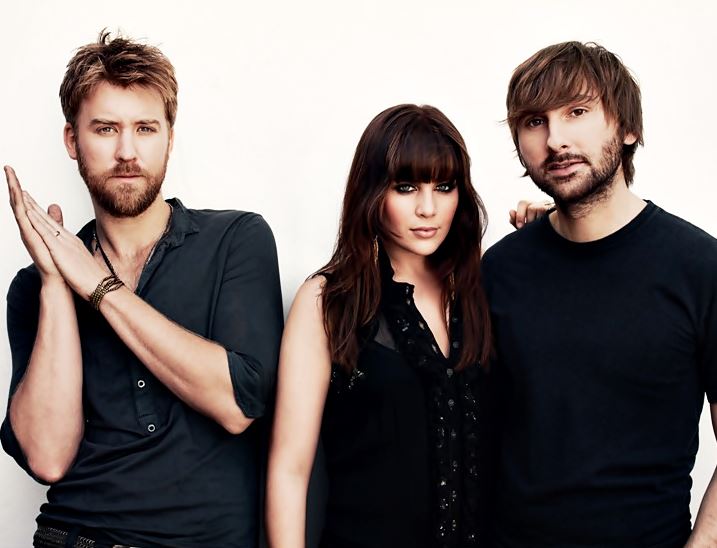 Lady Antebellum is a country group formed in Nashville, Tennessee in 2006. The trio is composed of Charles Kelley (lead and background vocals), Dave Haywood (background vocals, guitar, piano, mandolin) and Hillary Scott (lead and background vocals).
Scott is the daughter of country music singer Linda Davis, and Charles Kelley is the brother of pop artist Josh Kelley. It was these family connections and music industry ties that helped launch the band. Kelley moved to Nashville in mid-2005 from Winston-Salem, North Carolina, where he had been working construction with his brother John. Trying to become a successful solo country artist, Kelley convinced his old middle-school classmate, Haywood, to move to Nashville from Georgia in 2006 so they could write music together. Shortly thereafter, Scott recognized Kelley from MySpace, and they started to talk at a Nashville music club. Kelley later invited Scott to join him and Haywood in the new group, which assumed the name Lady Antebellum. The name Antebellum comes from when the group were photographing "antebellum" homes. The antebellum ('pre-war') architectural style describes the large plantation homes in the American South. While photographing the houses one of the group said that there's a great band name in there, and they adopted the Lady Antebellum name shortly after. The trio then began performing at local venues in Nashville before being signed in July 2007 to a recording contract with Capitol Records Nashville. In an interview with Sirius Satellite Radio, Scott claimed she was rejected from the hit show American Idol two times, not even making it past the first round.
Shortly after the trio signed to the label, adult contemporary artist Jim Brickman chose Lady Antebellum to sing on his 2007 single Never Alone, which reached #14 on the Billboard adult contemporary charts. In mid-2007, Lady Antebellum also wrote a song for the MTV reality television series The Hills.
Their solo debut single Love Don't Live Here was released in September of 2007, with a music video for the song following in December. This song was the lead-off single to the band's self-titled debut album. Released on April 15, 2008, Lady Antebellum was produced by Paul Worley and Victoria Shaw, a Nashville songwriter and former solo artist. Love Don't Live Here reached #3 on the Billboard Hot Country Songs charts. The album itself was the first album by a new duo or group to debut at Number One on the Billboard Top Country Albums charts.
A second single, Lookin' for a Good Time, was issued in June 2008 and peaked at #11 in December. In addition, Lady Antebellum was signed as an opening act on Martina McBride's "Waking Up Laughing Tour" in 2008. Lady Antebellum also contributed the song I Was Here to the AT&T Team USA Soundtrack, a song which peaked at #24 on the Bubbling Under Hot 100 based on downloads. In December 2008, their rendition of Baby, It's Cold Outside peaked at #3 on the same chart. Their third official single, I Run to You, was released in January 2009. It eventually became the trio's first Number One in July 2009.
On October 7, 2009 their debut album was certified platinum by the RIAA for shipments of one million copies in the United States.
In August 2009, the group released their fourth single, Need You Now, the lead-off single and title track to their second studio album. It debuted at #50 on the Billboard Hot Country Songs chart and became their second Number One hit on the charts for the week of November 28, 2009. The song also reached a peak of #2 on the Billboard Hot 100 and was a number-one hit on the Hot Adult Contemporary chart, making it a crossover hit. A second single, American Honey, was released to radio on January 11, 2010 and would become their third #1 hit. Our Kind of Love was released as the third single from the album on May 31, 2010 and became a #1 single in September, 2010.
The album debuted at #1 on the Billboard 200 and Top Country Albums charts for the week of Feb. 2, 2010, selling 480,922 copies in the first week. Four weeks after the album's release, it was certified platinum by the Recording Industry Association of America.
The week of January 9, 2011, the group ventured into the studio to begin recording for their third studio album. In an interview with Entertainment Weekly, Kelley said, "We actually just went ahead and decided we’re gonna take two, two and a half months straight in the studio to create this thing and not have all this distraction. Hopefully that will be a good thing". He goes on to say that the group has around 50 songs which they plan to choose from along with songs from other songwriters. However, he singles out a song called Dancing Away With My Heart as one the band is particularly excited about, a song that the group co-wrote with Josh Kear, who previously wrote with the group on their hit Need You Now.
On May 2, 2011, the group released the first single from their upcoming album, titled Just a Kiss. The group performed the single on stage on American Idol's result show on May 5, 2011.
Official website found here: http://ladyantebellum.com/