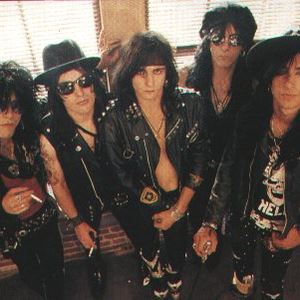 L.A. Guns is the name of a glam metal group from Los Angeles, California. The current version is led by vocalist Phil Lewis with drummer Steve Riley. From 2006 to 2012, (four years after his departure from the band) Tracii Guns reformed his own version of the band, and during that time, there were two distinct lineups of L.A. Guns performing.
The group was initially formed in 1983 and was composed of guitarist Tracii Guns, singer Axl Rose (who left to form Hollywood Rose and was replaced by Michael Jagosz), bassist Ole Beich and drummer Rob Gardner. The group disbanded in 1984 when Tracii Guns and Axl Rose decided to merge both L.A. Guns and Hollywood Rose to form the first lineup of Guns N' Roses. The lineup included Axl Rose and Izzy Stradlin from Hollywood Rose and Tracii Guns, Ole Beich and Rob Gardner from L.A. Guns. However, this was short lived when all three L.A. Guns members left the group. The embryonic group still played a huge role in defining the later sound that Guns N' Roses would use.
In 1985, L.A. Guns was reformed by singer Paul Black, initially as Faster Pussycat, recruiting former Dogs D'Amour singer Robert Stoddard to be the new guitarist. The group was rounded up by Nickey Alexander on drums and Mick Cripps on bass. Following Tracii Guns addition to the band, they re-adopted the L.A. Guns moniker. After signing a deal with Polygram Records, Black was replaced by Phil Lewis (formerly of Girl), Cripps switched to guitar (replacing Stoddard) and bassist Kelly Nickels (formerly of Faster Pussycat) joined the group completing the lineup.
L.A. Guns debut album, titled simply 'L.A. Guns', was released in 1988 charting at number 50 on the Billboard 200. When they toured in support of the album, Alexander was replaced by former W.A.S.P. drummer Steve Riley. This lineup would remain until 1992. During this time they released 'Cocked & Loaded' in 1989 and 'Hollywood Vampires' in 1991. Their first two album managed to achieve platinum status while the third achieved gold, the band gaining a huge fan following despite the rise of alternative music. In 1994, they released their fourth album, titled 'Vicious Circle', Drummer Michael "Bones" Gershima played on parts of that recording as this was around the time Phil Lewis fired drummer Steve Riley in January 1992 (after touring with Skid Row in support of 'Hollywood Vampires'). Riley later returned to the band for the 'Vicious Circle' club tour.
As the 90s went on, the group went through numerous lineup changes following the departures of Lewis and Cripps. Members of L.A.Guns during this time were singer Chris Van Dahl (formerly of Boneyard), guitarist Johnny Crypt (formerly of Boneyard, Ripper and Fatal Attraction), singer Ralph Saenz (also known as Michael Starr of Steel Panther) and singer Jizzy Pearl (formerly of Love/Hate). They released two studio albums (American Hardcore in 1996 and Shrinking Violet in 1999) and one EP (Wasted in 1998).
In 1999, the classic lineup of Lewis, Guns, Cripps, Nickels and Riley reunited for a tour in October 1999, eventually releasing a live album, Live: A Night on the Strip, the following year. After they couldn't commit to a summer tour, Cripps and Nickels left the group replaced by guitarist Brent Muscat (of Faster Pussycat) and bassist Muddy. In August of the same year, L.A. Guns re-recorded and re-released Cocked & Loaded retitled Cocked & Re-Loaded with Cripps returning to the group soon afterwards. They released their seventh album, titled Man in the Moon, In April 2001. After a short tour, Muddy left the group and was replaced by Adam Hamilton.
In 2002, Tracii Guns left L.A. Guns, whilst recording a new album, to form the hard rock supergroup Brides of Destruction with Nikki Sixx (of Mötley Crüe). L.A. Guns released the album Waking the Dead, the last album to feature Tracii Guns, in August, 2002, then recruited guitarist Stacey Blades to replace the departed Guns. This lineup of the group went on to release the covers album Rips the Covers Off in 2004 and Tales from the Strip in 2005. Adam Hamilton left the group in 2007 and was replaced by Scott Griffin who subsequently left the group in 2009, replaced by Kenny Kweens (Villains of Vaudeville formerly of Beautiful Creatures).
In 2006, after putting the Brides of Destruction on hiatus, former L.A. Guns guitarist Tracii Guns formed The Tracii Guns Band bringing in original L.A. Guns members Paul Black and Nickey Alexander as well as his stepson Jeremy Guns. He then renamed the group L.A. Guns with drummer Chad Stewart joining the group, replacing Alexander. In 2008, while the group were recording a new album, Paul Black was fired from the group and replaced by Marty Casey (of Lovehammers), who was writing with the group, while guitarist Alec Bauer also joined L.A. Guns. After touring in 2008 and early 2009, Casey returned to Lovehammers to record and release Heavy Crown. They hoped to have a release date set for the new album (as well as a new band name) however the album was shelved and Jizzy Pearl joined the Tracii Guns' L.A. Guns with guitarist Bauer departing the group.
In May 2010, after signing a deal with Steve Vai's Favored Nations label, the Tracii Guns' L.A. Guns released the Shrinking Violet (Deluxe Reissue).
In 2012, Tracii Guns' L.A. Guns was disbanded, leaving only the Phil Lewis fronted version of the band performing under the moniker.
L.A. Guns
Phil Lewis - lead vocals (1987–1995, 1999–present)
Steve Riley - drums (1987–1992, 1994–present)
Kenny Kweens - bass guitar (2009–2011, 2014–present)
Michael Grant - lead guitar (2013–present)