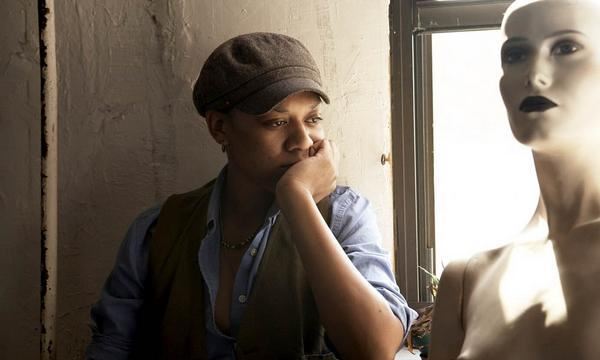 Seeing Krystle Warren perform for the first time is a striking experience. First, there is the utter improbability of it all: she shuffles onstage with little more than a low-key hello, and proceeds to sing with an effortless power that completely belies her tiny frame. Hearing her fill a crowded club without using a microphone … that’s a Voice. And then there are her vocal stylings, which feature a melisma as rich as that of Wonder or Hathaway, but put all of that technique at the service of music that has never heard such a thing – folk and country, songs influenced by everyone from Nick Drake to Joni Mitchell to Willie Nelson. But when you’ve gotten past the incongruities, you quickly begin enjoying her for what she is – a wholly original singer-songwriter-poet in an age of few.
One would expect, judging from Krystle’s honeyed voice and sophisticated lyrics, that she’d come from a long line of professional musicians, but that isn’t the case. Born and raised in Kansas City, music was casual in the Warren home, from her grandmom’s eight track tapes to the lullabies her family sung around the house, to a brief and much-hated stint in the church choir. She herself remembers starting to sing at the age of four, but it wasn’t until she saw an ABC special on The Beatles at age 13 that she really became passionate about learning and performing music. Krystle learned her first chords by ear from Rubber Soul and Revolver, and her musical horizons quickly expanded to include grunge (Smashing Pumpkins and Soundgarden), classic Brit Pop (The Kinks, The Who, The Faces) and even jazz, in particular Betty Carter, Nina Simone, Kurt Elling and even Mel Torme. With these diverse influences, it wasn’t surprising that she quickly developed a sound of her own.
At 17, Krystle took her fledgling songwriting skills out into KC’s thriving counterculture, befriending numerous avant-garde artists, from painters to street poets to singers, who gave her the support to move forward with her music. "I knew a lot of amazing people in Kansas City," Krystle recalls, “quite a few musicians and composers who were really into something new. Though I started in the singer/songwriter scene, I began performing in a lot of jazz spots when I was about twenty, and those folks were really helpful in my education."
While Krystle never perceived a glass ceiling on what she could accomplish musically in the Midwest, she did feel a growing wanderlust. “I could have gone anyplace, Austin, San Francisco; it didn’t matter much to me. I just wanted to see something new, and somehow that place was NYC. I did choke up a bit leaving KC -- I’d never lived anywhere else. My very first night in NYC was thrilling, but after crashing on numerous couches in the West Village, I began to feel like I was in over my head.” Krystle eventually fell in with some jazz musicians, who she would share the stage with.
Krystle’s live shows have been garnishing praise from both fans and critics alike, and she’s toured the US with artists ranging from Martha Wainwright to Zap Mama, from Rodrigo & Gabriela to Erykah Badu. Warren also recently had the opportunity to open for the whole Keziah Jones French tour late 2008 – debuting 2009.
Her debut album “Circles”, recorded with two-time Grammy-winning producer Russell Elevado at the fabled Electric Lady Studios in NYC will be out next April in France on Because Music. "Circles" was concieved as we went along. Only now when I listen to it do I get the sense of each song supporting the other; that each song is a circle within a circle. "To the Middle" speaks to the prodigal child, begging them to come back home. "The Title Song" has it's narrator repeating how it can't come back, no matter how hard it's tried. Every song on the record has some sort of longing to it, though "Circles" wasn't supposed to be conceptual. Ihad quite a few songs to choose from but was geared towards particular pieces, (newer tunes, of course) and we just went from there; "we" being Russell Elevado, the Faculty and I.
We wanted to make a record that sounded like all our heroes in one. Russ is a big analog advocate, so it was obvious already what the sound would be and how the production would take shape.”