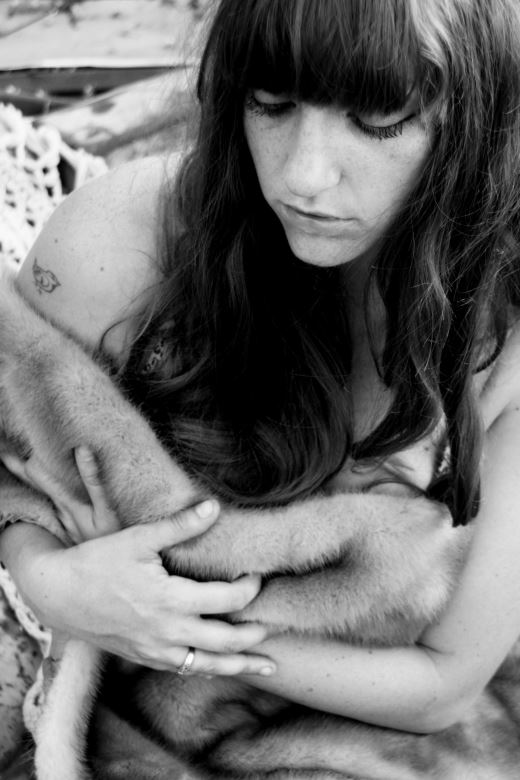 Kristi Michele is like a rainbow comprised of all the colors left over from many a rainy day. British folk, Broadway show tunes, Brill-Building pop, gypsy jazz, cabaret, and psychedelia are each influences on her songs, sometimes gentle folk ditties accompanied by a plucked acoustic guitar, other times vocal melodies layered as sweetly as tiramisu and set to Ragtime piano. Whatever the package, her songs evoke a time gone by. Her voice has the nostalgic quality of a vintage chanteuse, hinting at the torch singing of Billie Holiday, the wavering folk bellow of Maddy Prior, and the theatrical alto of a turn-of-the-century vaudevillian act. Her songs are tales of misty forests, chirping birds, and creaking Viking boats woven into ornate tapestries of sound, with touches like glockenspiel and auto harp. Lyrically, her songs are reminiscent of both the droll styles of classic songwriters like Cole Porter and Blossom Dearie and the long, billowing narratives of 1960s folk artists such as Joni Mitchell. For these reasons, she has been compared to such current artists as Joanna Newsom, Regina Spektor, and Cat Power.
Her pursuit of music comes as no surprise to those who know her well- Kristi Michele has been singing songs since she very first figured out how. It began very humbly, her audience a mere assembly of plush stuffed things in her bedroom. After capturing the hearts of all the inanimate objects in her house, as well as the unwavering adoration of nearly all her blood relatives, she decided to try her hand at songwriting. Early influences were as diverse as Rodgers and Hammerstein, Johann Sebastian Bach, and Salt-n-Pepa. Equipped with a Casio keyboard, a karaoke machine, and a demo version of the music recording program “Cakewalk”, the 12 year old Kristi Michele began pursuing her recording career in earnest. Her sound developed as she discovered influential artists such as The Beatles, Harry Nilsson, Bjork, and Vashti Bunyan.
She was always called a songbird, wherever she’d go. She performed on many stages and sang in many shows, building her chops in musical theater, jazz, coffee shops, and even a punk band. After high school, Kristi Michele studied music at several colleges but was disenchanted with the rigid format of the educational system, and left in favor of pursuing her own career. However, the orchestral skills she developed there are an integral part of her songwriting. One of her current projects is an all-vocal EP that will be arranged and sung entirely by her. She is also working on a full-length album that she plans to co-produce and fully orchestrate.
Kristi Michele has just released her first album, entitled “Bric-a-Brac: A Collection of Musical Stories, Sentences, and Half-Words.” True to the title, the album is a compilation of various works she has created and is an accurate reflection of her musical sensibility- meandering between lilting finger-picked folk songs, quasi-orchestral instrumentals, and theatrical piano tunes in waltz time. Her song, “My Viking”, was recently released on the compilation CD “Goin’ Back Home” and has received independent radio play in Portland, Seattle, Los Angeles, and New Orleans.