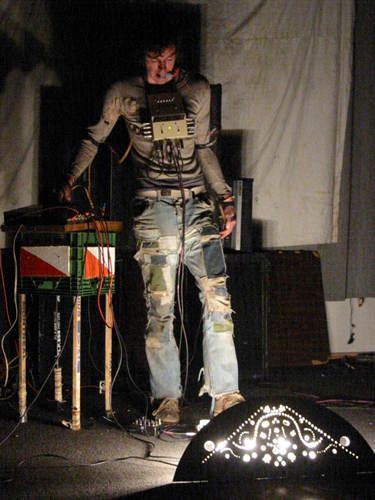 There is more than one band with the name Kites.
1) Kites was an experimental noise and psych-folk project from the bizarre mind of Providence artist Christopher Forgues (later of Mark Lord, Dynasty, Daily Life, Brown Recluse Alpha), best known for his graphic novel serial Powr Mastrs. His 2005 album "Peace Trials" was critically lauded. ArtNoise had this to say:
"Kites' Peace Trials creeps on a thin bridge between a small, strange world of Chris Forgues’ own creation and our own politically torn world. On the liner notes to this his third release on Load (preceded by Royal Paint With the Metallic Gardener From the United Sates Helped Into an Open Field By Women and Children and his split with Prurient for those keeping track) it states that everything was “done with homemade, modified, or commercial equipment, no keyboards, computers, samplers, or digital synthesizers were used.” These facts become particularly interesting on tracks like “Flag Torn Apart” and “True” where the sounds created make you want to argue otherwise. Kites’ approach to developing his sound, for more of an art head, is interestingly punk at its heart. Forgues’ has truly done everything himself, including recording Peace Trials on a 4-track at his home in Providence. The insert shows the knobbed and strung gadgets of his creation that produce all the sounds within.
The album ping-pongs between two different song structures. The odd-numbered tracks tackle less structured disorienting noise experiments, while the evens embrace simple, sung peace tunes. The more challenging frequency, frying tracks like “Exploded Face” and “Downward/Creepy Crawl,” are balanced by his more accessible stringed songs such as “Something About America” and “Baby Fawn With Broken Legs”. The softer tracks are very memorable in their simplicity and make the piercing tracks more successful, and at times more bearable. The effectiveness of brevity is also played with. Many noise artists dabble with a test of tolerance aesthetic, while Kites works within a much shorter frame. The short nature of the album helps add to some of its charm. Whether it is his unnerving deep creepers or his melodic strummers, Kites’ honest belief in the project shines through its conceptual aspects, making Peace Trials particularly warm; a nice little addition to the Load collection.
Though for what seems such an intimate project, the lyrics take on a much larger scope then expected. More interesting then typical ”Fuck Bush” sentiment, the album is rather loosely tied by a political theme of a larger scale. At times too large, and actually at times too vague to be particularly effective. The specific issue that Kites wishes to address is alluded to with track titles like “Flag Torn Apart” and “Something About America”, but not clearly supported lyrically. This isn’t necessarily a problem. I find some of the strongest lyrics are those less specific, leaving room for personnel interpretation and application. He seems to be addressing not directly the current political state of America, but the larger issues of war/violence based government and police states throughout history, particularly their affects on youth. Kites is amongst a few art rockers (most notably Lightning Bolt on Hypermagic Mountain and the USAISAMONSTER) pushing the content of their genres, and exhibiting a political conscience. This step breaks some who may discredit it all as noise without substance,and shows a new level of depth for these artists. The downfall is they then become rooted in something identifiable.
I’m excited that artists like Kites are going out on these political limbs, but the allure and fun of the escape that they provide is somewhat lost. Part of the attraction for me has always been the space that artists like these created, and how it was untouched by the intrusive “real world.” I’m sure all this isn’t going to be as detrimental as I first feared, and that that space for escape will always be available for some."
2) Screamo / Spoken words band from Australia
https://kitesband.bandcamp.com/
3) Kites is the brainchild of Singer/Songwriter/Producer Jean-Philip Grobler. Originally from South Africa, but now living in New York, Jean spent a year crafting the sound that has now become the EP 'You and I in the Kaleidoscope'. Built from songs written years earlier, Jean molded the basic chords and melody into something altogether more densely layered and beautiful. This is only the beginning though, as Jean is already half way through his next EP, which builds on and sometimes even smashes the template created on 'You and I in the Kaleidoscope'.
http://www.myspace.com/kitessite
4) Kites is the Russian indie-rock/shoegaze group from Barnaul, Russia. Kites released three EP's, one of them, Four Songs for Different Feelings, was published by independent net-label Free as a Bird.
http://myspace.com/kitesrussia
5) Kites is an indie band from Texas.
http://kitestx.bandcamp.com/