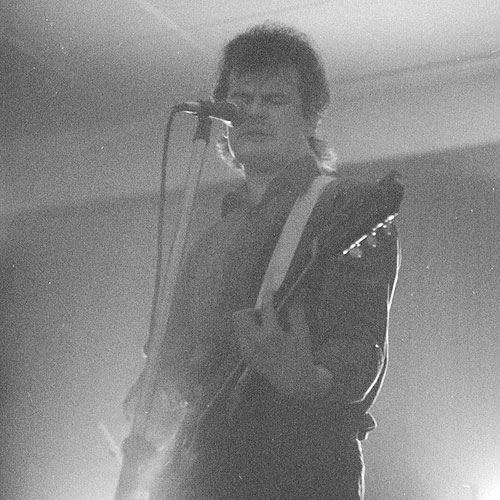 Leicester (UK) based singer-songwriter.
The Factory Years
The Leicester based singer songwriter (who has seen a revival of interest in the mid 2000's and a new label, Burning Shed) was an early member of the Factory Records roster. Following the death of Ian Curtis (lead singer in Joy Division), Hewick was trialed by Factory owner Tony Wilson, who placed him in the studio with the remaining members of Joy Division (Peter Hook, Bernard Sumner, Stephen Morris) and producer Martin Hannett to record the track Haystack.
Other Factory releases included the controversial live side of the "A Factory Quartet" double album in 1981 - "Live tracks picked against my wishes by Tony Wilson of a confrontation between me and a very aggressive audience - I never lived it down" and the single "Ophelias Drinking song" - "Kinda weird but I kinda like it" - which featured producer Donald Johnson of A Certain Ratio on percussion and was mixed by Peter Hook of New Order.
"Tony Wilson used to sound out ideas with me all the time, very like the fictional Steve Coogan Tony does with the John Thomson charecter in "24 Hour Party People". He once told me about the
idea of The Hacienda and I said you can't even run a record company properly how are you going to run a club as well? In the end I lost my novelty, Tony was moving onto newer, more exciting projects than me and I was a bit more of a whinger in those those days too, so that was that, it all faded away. A shame because we never achieved all what we could have done back then, I had some spark of something but I was very misguided and handled badly by Factory in the creative/business sense, yet I loved the label and Wilson and Alan Erasmus."
Cherry Red
In 1982 he left Factory for a period on Cherry Red Records, releasing an album "Such hunger for love", and an EP in collaboration with the late Adrian Borland and The Sound "Reality/Unreal" (1983). These items and much of the Factory era have been compiled on 2003 Cherry Red release "Tender bruises and scars" which also features extensive sleeve notes by Kevin about his experiences in the early 80s.
After being dropped by Cherry Red by 1984, constantly savaged and ridiculed by the music press, and deveoping total writer's block, Hewick hit rock bottom in his musical and personal life.
Present Day
Continuing, after the 5 year self confessed "black hole period" in the mid-late 80s, since 1989 to the present day Kevin Hewick maintains his status as a stalwart of the Leicester music scene and can be found at frequent gigs within the city both as performer and/or event organiser. He is still a prolific songwriter, citing 2005 as his best year for that so far this decade.
"My voice has held out really well for my age, and I think I use it better than I ever did. I'm still up for it all and have a better range of expression and better songs than I had years ago, my best is in the now and the future"
Most likely the only act to have ever supported both ]Joy Division and Showaddywaddy, Kevin's other support slots over the years have included Roy Harper, The Fall, Durutti Column, New Order, Section 25, PJ Harvey, Martin Carthy, Kevin Coyne, Fairport Convention, Dr. Robert, BJ Cole and Bobby Valentino, Eyeless in Gaza, Sonja Kristina, Clive Gregson, Ben Watt, Tim Rose and Jackie Leven with whom he has sometimes also performed with in The Stornoway Girls, including appearances on the Leven live albums "Greetings from Milford" (2001) and "Only the ocean can forgive" (2003). He has also guested on guitar and/or vocals on albums by The Freed Unit, Steve Cartwright, Meta-Tekki and recently on ist's "King Martha" (2005).
Kevin has also recently returned to appearing on the London acoustic circuit after an absence of nearly 5 years.
Much of his recent work including the album "Helpline" (1999) has been issued by Leicester maverick label Sorted Records.
Forthcoming 2006 material will be released on Burning Shed.
Kevin can be found as a regular on the forum part of Pineapster an on line music community of the East Midlands. He feels his involvement with this site has bought about a major improvement in his connection with local audiences and fellow Leicester artists. He strongly feels that the city's time has come to step out of the shadow of better known centres of UK music activity.
He also contributes occasional album and live reviews to Planet Sound, the Channel 4 teletext music pages, and has written material for The Leicester Mercury, BBC Radio Leicester, Tight but Loose (The Official Led Zeppelin magazine), Wears the Trousers and a chapter for "(The Book of) Happy Memories", an appreciation of the life of The Sound's Adrian Borland published in English and Dutch editions.