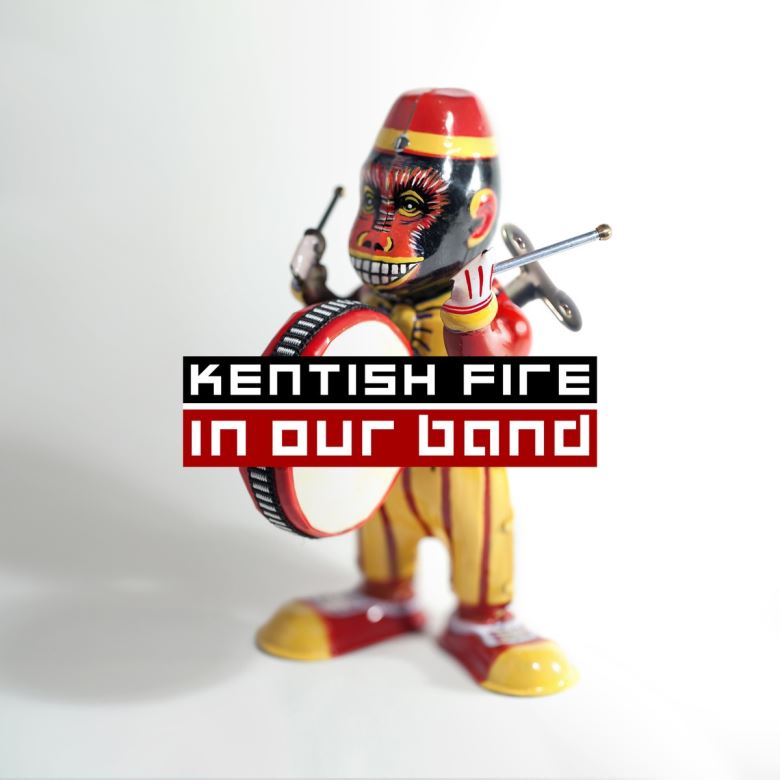 Kentish Fire are an indie disco band based in Camden, London. Formed in 2009, they produce up-tempo guitar- and synth-driven music in the vein of LCD Soundsystem, Franz Ferdinand and The Klaxons.
FORMATION AND MEMBERS
The band comprises lead singer and guitarist Michael “Inky” Inkpen, singer and bassist Anna Gregson, guitarist Andrew “Snakes” Louis and synth player Warren Gebhardt.
Kentish Fire began as a studio project by Warren and Snakes, who moved from South Africa to London in 2002. They had previously enjoyed considerable success back in South Africa with carnival-style world music ensemble THC, playing all the major Southern Africa festivals (including Womad and Solipse Festival), and performing with numerous big names such as The Orb, Zion Train and Ladysmith Black Mambazo.
In 2009 they met the afro-clad Inky, with extensive prior gigging experience and an impressively distinctive vocal style. Several months later, they met Anna, a bassist, singer-songwriter and former promoter for London music night 1001 Acoustic Nights. This completed the current line up, and the band began gigging at the start of 2010. Since its formation the band has played with numerous drummers, and is currently performing with Italian percussionist Andrea Turco.
MUSIC
With varying musical backgrounds, Kentish Fire cite diverse influences including Bloc Party, The Pixies, The B52s, ACDC and Moloko. Their sound is defined by staccato synth lines, distortion-heavy guitar riffs, disco bass lines and the pairing of Inky’s sharp, angular vocals with Anna’s softer melodies.
“[Kentish Fire] meld falsetto vocals, funkified bass lines and post-punk guitars.”
Time Out, 2010
PERFORMANCES
Past performances have included supporting a Hot Chip DJ set at Brixton Jamm, headlining Saturday nights at the Camden Barfly, and appearing at numerous other venues such as The Borderline, The Lexington, Madame Jojos, and The Hoxton Underbelly. In the summer of 2011, Kentish Fire are appearing at a number of small festivals including Nozstock, listed as one of the Sunday Times’ Top 100 festivals of 2011.
Styling themselves with a pseudo-military ascetic, the group perform in front of Kentish Fire-branded flags. Their performance style is highly charged, uninhibitedly energetic, and often theatrical in nature. The Camden Barfly reviewed them in 2010, saying:
“Pop dance rock in the mould of LCD Soundsystem [...] tighter than the proverbial ducks derriere, infectious and appealing – due some big noise soon.”
RELEASES & REVIEWS
In June 2011, Kentish Fire released the single So Unpredictable through all major digital stores, together with a supporting promotional video on YouTube. It continues to receive positive review coverage from various online music blogs.
“This is just so very good!”
Andy Von Pip, 2011
“I'm always going to like a track where there's a strong buzzing bass line up in the mix. Utilizing boy/girl harmonies to great effect Kentish Fire have that perfect indie pop sound, with a disco underbelly, that can lift a song to its full potential. The Camden band have produced a cracking debut single with this.”
New Singles Review, 2011
“Very very catchy. Very catchy indeed […] impossibly fun and frenetic, taking indie staples and rewriting them for the teenybopping generation as they drink cider in the woods and discover glow sticks.”
THE 405 (Single of the Week), 2011