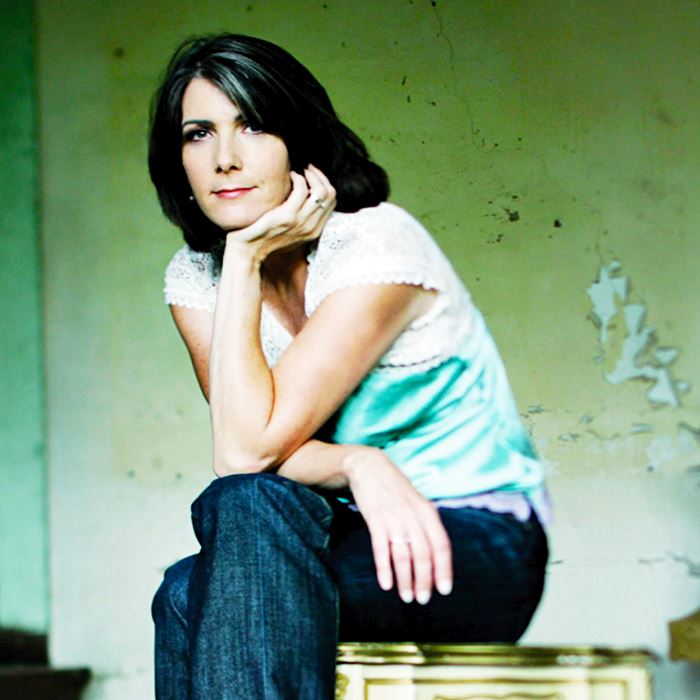 She was born in South Charleston, West Virginia because it had the nearest hospital to her parents' home in Cross Lanes, where she grew up, graduating from nearby Nitro High School. In 1976, while in college, she joined the bluegrass band Pennsboro, and two years later dropped out of school to move to Nashville. She worked as a tour guide at the Country Music Hall of Fame, did backup vocal work for Bobby Goldsboro , and sang demos for several Nashville songwriters and publishers including Nashville songwriter/producer Byron Hill, who brought her to the attention of Frank Jones (then head of Mercury Records), who signed her to her first record deal in 1983.
Mattea's third album, 1986's folky Walk the Way the Wind Blows, proved to be her breakthrough both critically and commercially. Her cover of Nanci Griffith's "Love at the Five and Dime" was her first major hit, reaching #3 (and in addition, earned Griffith notice as a songwriter); and the album produced three other top ten songs: "Walk the Way the Wind Blows" (#10), "You're the Power (#5), and "Train of Memories" (#6).
Further hit songs include her first #1, "Goin' Gone"; the truck-driving song "Eighteen Wheels and a Dozen Roses" (1988); "Come From the Heart" and "Burnin' Old Memories" (both #1 hits in 1989); "She Came From Fort Worth" (1990); "Lonesome Standard Time" (1992); "Walking Away a Winner" (1994); "Nobody's Gonna Rain on Our Parade" (1994); "Maybe She's Human" (1994); and "455 Rocket" (1997). "Eighteen Wheels," in late May 1988, became the first single by a solo female to spend multiple weeks at No. 1 on the Billboard country singles chart since Dolly Parton's "You're the Only One" in August 1979; both singles were on top of that chart for two weeks.
The heart-wrenching "Where've You Been," which Mattea's husband Jon Vezner co-wrote with singer/songwriter Don Henry, reached #2 on the country chart and won her a 1990 Grammy for Best Female Country Vocal. Mattea is a repeat winner of the County Music Associations Female Vocalist of the Year, which she won on the success of "Eighteen Wheels and a Dozen Roses" and "Where've You Been."
The following year, Mattea took part in Voices That Care, a multi-artist project that featured other top names in music for a one-off single to raise money for the allied troops in the Gulf War. The project included fellow country singers Garth Brooks, Kenny Rogers and Randy Travis. She has also been heavily involved in HIV/AIDS-related charities beginning in the early 1990s, and is often credited with leading the country music community, commonly regarded as the last segment of the entertainment industry to address the AIDS epidemic, to finally do so. She performed with Mary Chapin Carpenter on VH1's very first Save The Music concert, which also starred Bette Midler.
Mattea won another Grammy in 1993 for her gospel-oriented Christmas album Good News. Her first single from the album, "Mary, Did You Know?" went on to be covered by Kenny Rogers with Wynonna, as well as Reba McEntire.
Mattea subsequently moved to MCA and, in 2000, released the ballad-heavy The Innocent Years, a heartfelt tribute to her ailing father. Wanting to explore her taste for Celtic folk, Mattea hopped labels to Narada, for whom she debuted in 2002 with the eclectic Roses.
With her social activism and her taste for songs with introspective lyrics, it has been often said that Mattea owes as much to the traditions of folk music as mainstream country.
Though her recent work has failed to make the country charts, Mattea continued to enjoy a strong following throughout the late 1990s and early 2000s; her albums are critically well received, and she continues to tour and perform. She continues to have strong support from a very active fan club, run by Sue Phelps, whose members refer to themselves as Matteaheads.
Kathy travelled the country presenting Al Gore's "An Inconvenient Truth" and speaking to crowds about the importance to fight global warming.
Before leaving Narada she released another album full of differing influences, Right Out Of Nowhere, including a cover of a Stones tune.
Her recent CD "Coal" released on her own label is a collection of songs about mining and received a nomination for a Grammy. She continues to tour across the US and in early 2008 she made a welcome return to the UK.