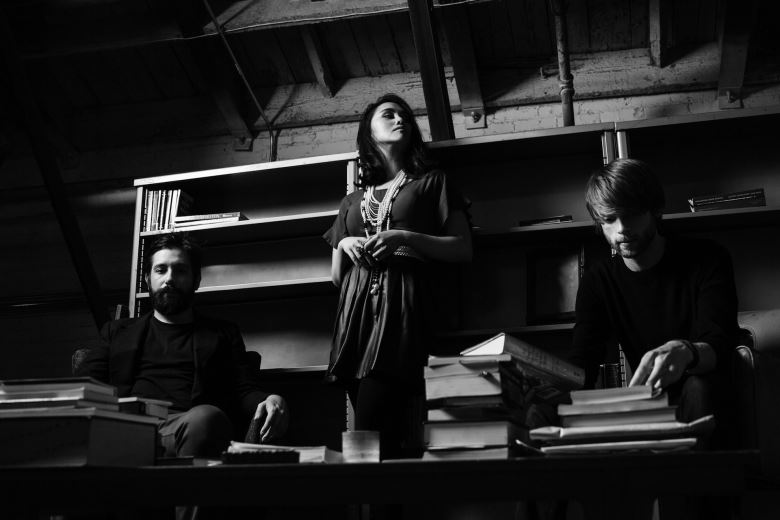 Kan Wakan arrive with a striking breadth of vision that immediately places them among modern pop’s most beguiling and inventive new artists. The Los Angeles-based group’s extraordinary debut LP “Moving On” introduced their ornate and enveloping amalgam of moody, hypnotic-soul, post rock, electronica and noir jazz, all reshaped and rearranged to create something both startlingly original and utterly contemporary. This darkly sensual and cinematic quality was championed by the ever-influential public radio stations, KCRW, WFUV and BBC Radio 6.
Kan Wakan emerged in early 2012, the musical brainchild of composer/producer Crooked Waters who was recently named in LA Weekly’s ’10 Best Songwriters in Los Angeles’. The Bulgarian-born musician originally set out to create solely instrumental music inspired by his lifelong passion for classical minimalism. In 2010, Waters split time between writing orchestral music for motion picture and performing in groups around Los Angeles, whilst recording bedroom demos. These early recordings served as the blueprints for Kan Wakan’s forthcoming debut album. “Many roots of the music are inspired by moving picture and fiction. A lot of arrangement ideas usually start with a quick sentiment, and develop viscerally undocumented over some time before I feel comfortable enough writing them down.”, Waters says.
Inspired by artists such as Massive Attack, Air and SBTRKT, the projects identity became deeply rooted in multiple collaborations. In 2011 Waters partnered up with guitarist / co-producer Peter Potyondy who helped push the projects vision forward. Together the duo spent the better part of 2012 shaping and molding the groundwork for their debut LP “Moving On”, which incorporates seamless integration of musical styles, from orchestral to r&b, trip hop, electronica, jazz, folk and psychedelia. Waters says, “It took a very natural course as we spent a year or so experimenting with sounds in our rehearsal room and finding our groove while we searched for vocal collaborators and more like minded musicians to perform with live.”
As the duo built upon a truly variegated palette of influences, common musical themes began to manifest, including an epic but cinematic hypnotic-soul approach inspired by such icons as Bill Withers and Nina Simone. “Forever Found” – the band’s first fully fleshed track – proved the aural template from which Kan Wakan lit out on their exploration of what Waters refers to as “the juxtaposition of song and symphony.” The Independent UK calls it ” A glorious, swirling, joyous and notably non-ironic take on a time when pop could be grand and orchestral, as well as playful and arch”. The track soon became a local favorite at KCRW, “It’s rare that Jason Bentley will play a single track every day for a week on MBE, but the track “Forever Found” by LA-group Kan Wakan has earned that distinction”.
Kan Wakan’s debut LP earned high praise from the editors at Rolling Stone, who called it” Dreamy, intricate stuff worth repeated-rehearings”, The Fader dubbed them “One of the most exciting acts of the year” and Buzzbands LA listed ‘Moving On’ as their #1 album of the year. The Daily Mirror added, “Impressive Arctic Monkeys-endorsed debut from LA-based newcomers”. Yahoo Music named Kan Wakan in their 2014 ’11 Best New Artists of the Year’ wrap-up. Which proved LA Weekly’s 2013 prediction true, when they included the band in their ‘Artists About to Blow Up’ list.
Having made an instantaneous impact, the band then spent the better part of 2014 touring behind their debut album “Moving On”, with stops at the ever influential SXSW and CMJ festivals, extensive touring in the UK including a performance at the buzz-worthy Great Escape Festival in Brighton. Later in 2014, Kan Wakan went on to support UK giants Royal Blood and the Arctic Monkeys on their respective sold out tours. Matt Helders of the Arctic Monkeys and fiancee Breana McDow, directed and starred in the bands latest music video for the song “Are We Saying Goodbye”. The band’s first single “Like I Need You” was selected as the theme song for HBO’s Game of Thrones Spring preview, which soon became an indie favorite on summer playlists. In December 2014 their track “Why Don’t You Save Me?” was featured in an episode of “State of Affairs”.
Kan Wakan continued their stride into 2015, with a feature performance for CBS that aired every night for a week during the Late Night Show with David Letterman and announced that they are beginning work on their sophomore album, which will feature exciting new collaborations.