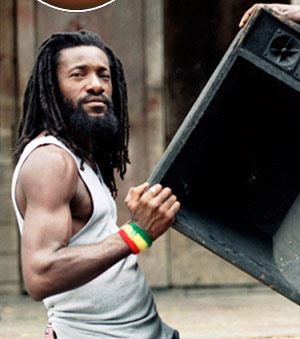 Tall, dreadlocked Junior Kelly is a devout Rastafarian and its Bobo Shanti mansion, on a serious musical mission which is manifested through the quality of his contemplative lyrics, the diversity of his substantial subject matter and his inspirational delivery. "Rasta Should Be Deeper". His “If love So Nice (Why Do It Hurt So Bad)” took a detour through Europe along its route to the top of the Jamaican charts, a position which it securely held for 15 weeks, Born in St Thomas, Jamaica 1970, Junior was raised in nearby Spanish Town. Throughout his childhood, he was surrounded by music, his grandfather and father both played banjo, his mother sang in the Church and his oldest brother Jim was a popular Deejay[rapper] with the Kilamanjaro Sound
There was a sense of comfort and security within the family; Despite their poor economic status they were rich in other ways. “If it’s soup today, we’re happy, if it’s crackers tomorrow, we’re still happy,” relates Junior, “because we knew we had each other to lean on.”
The family was plummeted into depression with the murder of junior’s oldest brother Jim. A part time caterer, Jim was the family’s principal breadwinner and a role model for Junior ; Jim regularly practiced his lyrical toasts in the family living room, greatly influencing the career path of his youngest brother.
After Jim’s death, to help support his family Junior followed soundsystems all over the island just for the opportunity to demonstrate his vocal and lyrical talents. He also began auditioning for several of the Producers comprising Kingston’s crowded music circuit, attempting to record songs. Adhering to his principled Rastafarian lifestyle, he refused to compromise his lyrical content by writing lewd lyrics or songs disrespecting women.
Junior’s career pace accelerated in late 1995 with appearances at major Jamaican stage shows including Reggae Sunsplash and Sting as well as shows in several northeastern American cities. While in America, he also recorded two songs, “Hungry Days” and “Good Tidings” for Willie Carson’s Front Page label. He returned to Jamaica to concentrate on his song writing and met Michael Stanford of M Rush Records for whom he recorded several singles including “Black Woman” and “If Love So Nice”.
“If love So Nice” took a detour through Europe along its route to the top of the Jamaican charts, a position which it securely held for 15 weeks, making it the longest charting number one tune on the island for the year 2000.
“If love so Nice”, one of, if not the most impressive Reggae song, impacted upon Jamaica with a force not experienced since hurricane Gilbert, posing a question every man and woman has asked at least once in a lifetime: “If love so nice, tell me why it hurt so bad?” Utilizing the forceful bass line played by Aston “Familyman” Barrett” on Bob Marley’s timeless tune “Stir It Up” gave “If Love So Nice” a familiar underpinning even though the vocalist Junior Kelly, delivering classic Jamaican blend of precision deejay timing and lovers rock crooning, was unknown to most Reggae fans.
Despite his seemingly sudden rise to success, Junior Kelly, also the writer of “If Love So Nice”, has been assiduously toiling in the music industry since 1985. “Some say this is a lucky break, I say no, it’s a result of hard work,” explains the affable sing-jay Kelly who cut his first single “Over Her Body” in 1985 for Neco Records. “Some say that culture in the music is a dying art form but it’s not. You have artists like myself who try to uplift the nation with words you can live by, there’s just less attention given to us by radio disc jockeys.”
Despite the attention ‘ IF LOVE SO NICE” has deservingly received, Junior Kelly is more than a one hit wonder ; A listen to his Jet Star albums ‘Rise” and “Juvenile”, not to mention his VP Records debut album of the same name “If love so nice”