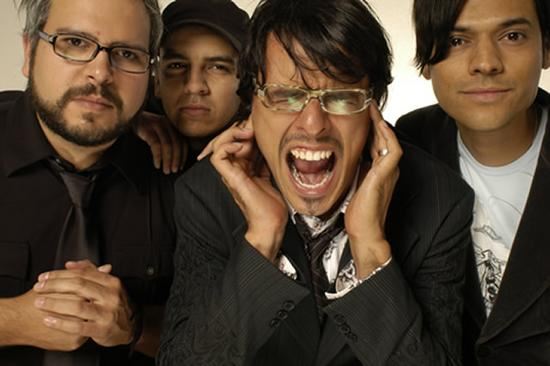 Jumbo is a name that has been used more than once.(1) is a musical group from Monterrey, Mexico. (2) was an Italian progressive rock band of the 70s. (3) Late 90's indie group from Newcastle, UK. (4) Late 80's Japanese band
Jumbo (1): In the early 90's, before the creation of Jumbo, Castillo, Charly, Eddie, Chuy Guerra, Javier Othón and René Garza formed a band called Blueswagen which played mainly covers of bands like The Beatles, The Rolling Stones, The Doors, Pink Floyd, R.E.M., U2, The Police, Lenny Kravitz, Stone Temple Pilots and The Red Hot Chili Peppers. They started gaining more fans and an increasing popularity, which led to playing bars and clubs and recording many demos. BMG obtained one of the demos and started looking for them. Later the band signed with them.
In 1996, Flip joined the band and in 1997 Bugs, Eddie's brother, returned from Quintana Roo, Mexico and also joined the band. They changed the band's name to "Jumbo", after an Asian baby boy named Jumbo Jin Li who weighed at the time approximately 50 kg.
In 1997 and 1998, they recorded their first album, Restaurant, which included the singles "Monotransistor", "Siento que...", "Aquí" and "Fotografía", songs which were well received by the public.
It was 2001 and Jumbo came back with 'D.D. y ponle play' their second recording. The first sigle was 'Rockstar'. Also, a song of this album appeared on one tv commercial, the song was 'Motocicleta'.
2003 marked the band's last studio release titled Teleparque spawning the hits "En Repeticion" and "Bajo Control."
In May 2005, brothers Eddie and Bugs Wako left the band. Bugs moved with his wife to Los Angeles, while Eduardo left the band so he could pursue different musical projects. Earlier in the year, Jumbo also released a greatest hits cd/dvd package that included two new songs ("Caminando Hacia Atras" and "Hasta Que El Sol Se Apague") along with their entire music video history.
Jumbo (2) formed in Milan at the end of 1969 around singer-songwriter Alvaro Fella (whose nickname "Jumbo" gave the band their name). Their debut self-titled album was recorded in 1971 and released in 1972, the same year as the second, the highly regarded DNA. Their third and final studio album, Vietato ai minori di 18 anni?, came out in 1973. After a long period of sporadic activity, the band reformed for a concert appearance in 1989 (recorded as Live in Paris). Fella's gravelly voice and the unusual combination of acoustic and electric instruments gave Jumbo a sound unlike any other progressive band of the time.
Jumbo (3): Released debut album "C.B. Mamas" in 1999 on indie label Bright Orange Biscuit, and self titled follow up on Cargo in 2001