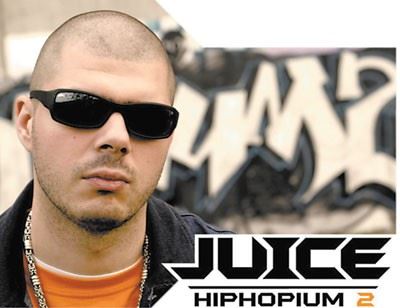 There are 20 artists that use this name
1. A DJ from Croatia
2. A rapper from Serbia
3. A rock band from Czech Republic
4. A rapper from Illinois, United States
5. A rapper from Arizona, United States
6. A metal band from California, United States
7. A jam band from Ohio, United States
8. A rock band from South Carolina, United States
9. A rock band from The Netherlands
10. A funk rock band from Australia
11. A rock band from Finland
12. A rock band from Thailand
13. A funk band from France
14. A demoscene musician from Croatia
15. A vocal ensemble from the United Kingdom
16. A psytrance duo from the United Kingdom
17. An R&B group from Denmark
18. A rock band from the United Kingdom
19. A Rock/Funk/R&B Indie band from Toronto, Canada
20. An alternative rock band from New York City.
1. Juice (bassinvaders, Signal, Program) - Music, Dates, Gigs, Pics, Info, Booking ...
last.fm
2. Juice (real name: Ivan Ivanović) is a rapper from Belgrade, Serbia.
3. Juice is a young band that draws on classic rock - Led Zeppelin, Aerosmith, Jimmie Hendrix and Cream. The band's history started in 2009 when Radoslaw Zander (vocals) joined guitarists Rafal Popinski and Rafal Bajus. When the team joined Luke “Leo Lee” Szemraj (bass, backing vocals), drummer Amadeusz “Amek” Krebs and Radek “Kordek” Kordowski "Juice" was ready to work on a material for an album which is supposed to be released in 2010. In 2010 Juice supported Scorpions in Prague (during the first show of their Farawell Tour) and KISS in Bratislava.
4. Juice is also an emcee from Chicago, Illinois. He is best known for beating Eminem in a freestyle battle; the famous Scribble Jam freestyle battle competition in 1997. Known for his smooth flow and his ability as a 'punchline rapper' he has received acclaim for his freestyles and battle raps. One notorious contest was his $5k battle against Supernatural. In his first album release, the independent album 100% J.U.I.C.E., featured the track "Sincerely" in which he speaks of his underground status, and proclaims to be "the cat that got famous for never being famous." Juice's latest album was entitled "All Bets Off" and was released in early 2005.
5. Richard Evans (born in Phoenix, Arizona), better known by his stage name Juice, is an American rapper currently signed to The Game's Black Wall Street Records label. He signed with BWS after The Game was touring Arizona, and received Juice's demo. 2009 he was co-signed to NBA All Star Amar'e Stoudemire's label Hypocalypto Records where he released his sophomore Mixtape. They parted ways early 2010. He has released three mixtapes, 2008's Death Certificate, 2009's Position of Power and 2010's American Me. The follow up Mixtape American Me II will drop this summer, followed by his debut album 'The Anticipated' which will be Co-Produced by The Game.
6. Juice was a band which formed after Johnathan Davis left SexArt to play with KoRn.
Brian Armer - vocals
Ray Solis - guitar
Tim Fluckey - guitar
Anthony Cutshall - drums
Dave Deroo - bass
7. Juice is a jam band and formed in 2003 by Matt (guitar, vocals), Brian (guitar), and Nick Thompson (drums). They recruited bassist Aaron Vilk in late 2005 and begin to work on their music, which is reminiscent of bands such as Umphrey's McGee, Particle, Phish, Rush, and The Ozric Tentacles. They are steadily gaining popularity in the Cleveland area.
8. Now defunct South Carolina band.
9. Juice is a dutch band.
10. Juice was a popular Sydney Funk/Rock band in the early 90's
11. Juice was a rock band founded by Juice Leskinen. The band formed after the break up of Coitus Int in 1975, and broke up after two albums (Keskitysleirin ruokavalio (1976) and Lahtikaupungin rullaluistelijat (1977)) in 1977. Juice's next band was Juice Leskinen Slam.
12. Juice is a rock band from Thailand with a self-titled album.
13. Juice is a funk band from Nantes (France).
their official website : http://www.juice.fr/
their blog : http://juice-music.blogspot.com/
14. Juice is a demoscene musician from Croatia.
15. Experimental vocal trio from UK - http://www.juicevocalensemble.net/
16. Psy Trance duo from UK : James Monro & Dick Trevor
http://www.discogs.com/artist/Juice+%2813%29
17. Danish RnB Trio - (with albums listed here)
18. JUiCE are a 3 piece pop/rock band from Preston/Manchester, UK. The members consist of Chris Hapgood (vocals and guitar), Jamie Gilder (vocals and guitar) and Ryan Oxley (bass guitar and vocals).
19. JUICE is a 6-piece Toronto band composed of Humber College music grads. JUICE draws influences from classic soul and R&B and combines them with the modern edge of indie rock and hip-hop to create their own musical style. Raw vocals, tight horns, and a heavy rhythm section give JUICE their unforgettable presence on stage.
20. Juice is an NYC-based alternative rock band and is comprised of songwriter John Samaras on vocals and guitar, drummer Jeremy Talbot, and bassist Sal Pisciotta.