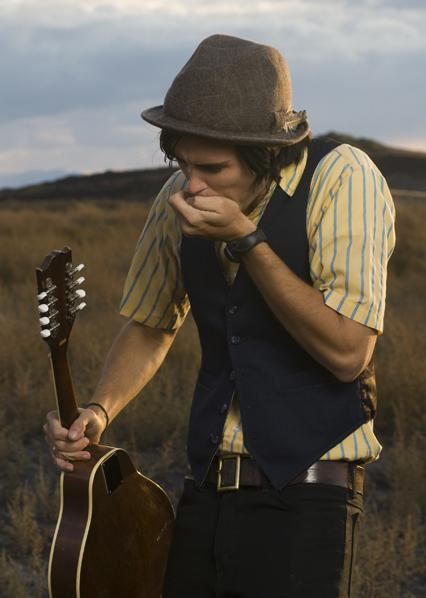 Joshua James has been writing and singing songs for only six short years, but the 25-year-old heartland poet has the perspective of a wise, old soul.
On his second album, Build Me This, the follow-up to his critically acclaimed The Sun is Always Brighter, produced by industry veteran Shannon Edgar, James expands his musical palette to foreboding doom-laden hard rock. Progressing from folkish harmonies, to country twang, world beats and southern home rock while further exploring themes of spiritual searching and heartbreaking loss. Possessing a whispery and intimate vocal style that works its way into the ear peacefully and directly, Joshua James is pitched midway between seminal influences like Bob Dylan and Neil Young.
“I find solace and beauty in darkness and depression,” admits James, who grew up in his native Lincoln, Nebraska, skateboarding and sneaking listens to music his parents banned, like classic rockers Jim Morrison and The Doors, Led Zeppelin, and Pink Floyd, “But there are contrasts to everything. You have to combine the sweet and salty, the ugly and beautiful. Music is very therapeutic for me. It’s all about making a connection with humanity, with the audience, in ways that I normally wouldn’t be able to.”
Over the past three years, James has been doing just that. His debut was the #1 Folk Album on iTunes, and “FM Radio,” a song about a childhood friend coping with the death of his father, amassed more than 150,000 downloads as part of an iTunes promotion. In addition to performances at Sundance, SXSW and CMJ, James has toured with John Mayer, David Gray and Ani DiFranco, winning legions of fans along the way. His new album, Build Me This, has already attracted major–label interest. “I feel strongly about the things I sing about,” nods Joshua. “I want people to know how I feel, which sounds kind of dumb, because who cares how I feel? If someone feels similarly, though, that’s what I’m looking for. That’s the most important thing. If
you can relate to what I’m going through, then I’ve achieved my goal.”
The album title, Build Me This, refers to his dream of salvation. “It’s my way of asking God to show himself,” declares James. “To prove he exists. Do something. Give me a sign. It’s a call to whatever or whoever is out there. I don’t want him to strike me down or paralyze me, just give me something to believe.”
Aside from the spiritual, Build Me This is also about the difficulties of everyday relationships, the inadvertent hurt we cause to those we love. “Magazine” deals with the pain of separation (“Go take your bags to New York City, call me when your plane arrives/I’ll feed the children, wash the dishes, I’ll keep the house lookin’ nice/Well don’t you worry, everything’s gonna be all right.”), while “In the Middle” laments a shattered romance (“You’ve tried so hard to forget me/You burnt the letters I’d made/Though my memory has been dyin’/I hope the feeling still remains”).
On the stage, though, is where Joshua James’ music comes alive and reveals its true intent, which is about drawing people into his insular universe, a sense of mystic that only the truly great ones can communicate.
“Perhaps the darkness comes out a little more often that I’d like,” he offers “but that’s just where I gravitate to when I’m writing. I don’t usually try to tackle specific subjects; it’s usually about what I’m feeling at the time. Things start to come out, then they form a story and a reason, and that’s how things evolve. I’m influenced by everything… by life, by love, by hate, by music.”