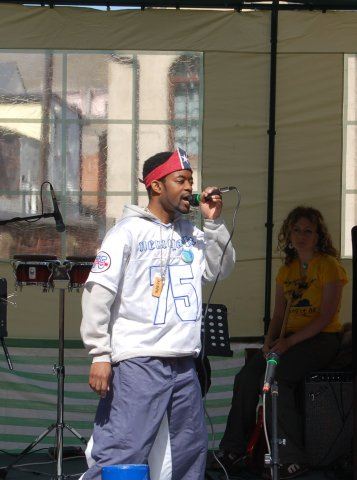 Born on 29 April 1973 in London, Joseph George grew up in Nigeria and came to England to study.
After completing a course in Banking, Insurance and Finance at Bangor University, North Wales, he decided to enter into the music industry by making a CD as a one-off to raise money for missions.
I then decided to enter into the music industry to make a CD as a one-off to raise money for missions, but God later told me to make it a business.
I still intend to dedicate a considerable percentage of my earnings to missions. I grew up listening to Michael Jackson, Lionel Richie, Stevie Wonder, Kurtis Blow, M.C.Hammer, L.L.Cool J, Shalamar, New Edition, Bobby Brown, Cameo to name a few. On becoming a Christian, I have been influenced by D.C.Talk, Grits, Cross-Movement, Priesthood, T-bone, Tunnel Rats, New Breed, GreenJade and more recently Pettidee and Jahaziel.
I started writing songs as a hobby following being inspired mainly by DC talk. I have since had three E.Ps and "Breakthru - The Next Level" is the second album under my belt. My first album is called "Time for Revival" ( Which you can find on Cd-baby and itunes) . Joey.G uses the gift of music to communicate the gospel of the Lord Jesus Christ in pubs, clubs, schools, assemblies, workshops, festivals, churches, fun-days, evangelistic outreaches, missions, T.V and radio. I have had the opportunity to perform in four different continents; namely - Europe, Africa, Asia and Latin-America. My Album has gone to 4 different continents - Europe, North-America, Africa, and Latin-America. I am now based in Abergele, North Wales, United Kingdom. I have been married to my lovely wife, Sian, for two years.