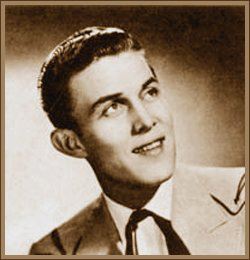 Jimmy Dean (August 10, 1928 Olton, Texas - June 13, 2010 Varina, Virginia) was an American singer, actor, and businessman who became a professional entertainer following a stint in the U.S. Air Force in the late 1940s. He was born Jimmy Ray Dean (not Seth Ward, as is sometimes stated - Seth Ward is the district of Plainview, Texas where he grew up).
He became the host of the popular Washington D.C. TV program Town and Country Time and, with his Texas Wildcats, became regional favorites. Both Patsy Cline and Roy Clark got their starts with Dean, who eventually fired Clark, his lead guitarist, for chronic tardiness. Patsy Cline and Dean were good friends during the run of the TV run of Town and Country Time in the mid-50s. He had his first hit, "Bummin' Around," in 1953 on the 4-Star label, which went Top 5, Country.
By 1958 he was recording for Columbia for whom he had a Pop (non-Country) hit with "Little Sandy Sleightfoot", a Christmas novelty number. Dean moved to New York in the 1950s where he hosted another TV variety show for CBS. He became best known internationally for his 1961 song "Big Bad John," recorded in Nashville, that went to No.1 on the Billboard charts and was a pop hit in the UK.. The song won Dean the 1962 Grammy for Best Country & Western Recording. He had several more Top 40 songs including a Top 10 in 1962 with "PT-109", a song in honor of PT-109 and John F. Kennedy. He followed that up with "Dear Ivan" which he wrote. It hit #9 Country and was also a Top 20 crossover success.
In 1959, he'd become the regular host of the CBS morning program. In the early 1960s he also hosted the Tonight Show on occasion and one night introduced Roy Clark, with whom he'd remained friendly, to a wider audience, helping advance Clark's career. In 1962 Dean also had a double sided hit with the recitation "To A Sleeping Beauty" coupled with "The Cajun Queen", harking back to "Big Bad John".
His mid-1960s ABC TV variety show was one of the first to present country artists with some dignity and class. Roger Miller, George Jones, Charlie Rich, Buck Owens and some like Joe Maphis, who seldom got any network TV exposure. He's also best remembered for his regular sketches with one of Jim Henson's long running muppets, Rowlf the Dog. Many guests, not remotely related to country music appeared on the show, as it was considered a solid entertainment program, and it offered the priceless "exposure" that is the food and drink to performers.
When the show ended, he began to dabble in acting in the late 1960s, with his best-known role being that of millionaire Willard Whyte in the 1971 James Bond movie, Diamonds Are Forever. He also performed around the country. He was mentioned in the Madonna song "Vogue" and in the 2006 Def Leppard song "Rock On".
Jimmy Dean passed away on Sunday June 13th 2010 at home on the banks of the James River near Richmond, Virginia following a lengthy illness which had left him wheelchair bound. He was 81 years old. He is survived by his widow, Donna, and two granddaughters, Caroline and Brianna.