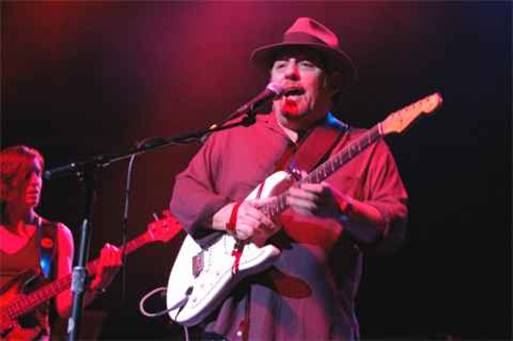 ..JD with music legends Joe Walsh and Slash.... .... Though he had only been hitting New York area stages for a few years, Jim Dolan - the "JD" in the band JD & The Straight Shot - found himself in an enviable position shortly after the release of his band’s 2005 debut album, "Nothing to Hide". That album and its accompanying tour received critical praise from blues critics across the country; from the Rocky Mountain News, which stated that "surrounded with crack players, Dolan was putting convincing voice and emotion into the blues-based set," to The New York Post, which hailed Dolan's "swaggering vocals" as "reminiscent of Tom Waits and Randy Newman."
For the past two summers, Dolan and his band joined up with one of the kings of guitar when rock legend and Eagles member Joe Walsh handpicked the rollicking quintet to perform as special guests on his North American tours, which included the much-anticipated reunion of Walsh's original band, The James Gang.
And JD took this rare opportunity all in stride. "I'm just like thousands of guys who picked up a guitar when they were 15, except that I never put it down," he says. "Music is one of my earliest passions and has always been a part of my life. One of my biggest thrills came a few years ago when I stepped onstage in front of a paying crowd for the first time. Of course, the crowds at those Joe Walsh shows had no idea who we were at first, but we eventually won them over. It was such an amazing feeling to start out as complete unknowns and earn the applause of true music lovers over the course of two summers."
JD & The Straight Shot made quite a splash at those high-profile appearances with Walsh. The Des Moines Register was just one of many taking notice, remarking that the "quintet held a balance of blues and rock, complete with close vocal harmonies and, of course, organ and blazing guitar solos."
On their 2005 debut album, "Nothing to Hide", Dolan and The Straight Shot combined slow-burning blues with fresh ballads and guitar-driven rock. Now, lead vocalist/ guitarist Dolan and guitarist/ chief songwriter Bruce Koplow are gearing up to unveil "Right on Time", their first newly recorded music in three years, which is set for release on June 24, 2008.
The new album includes guest appearances by some of the band’s friends, who just happen to include two of the greatest musicians to have ever touched a six-string. “Slow Motion in Reverse” features searing lead guitar work by touring companion Joe Walsh, while "Train’s A Coming” spotlights the intensity of pedal steel guitar virtuoso Robert Randolph, also known for leading his own Family Band while collaborating with such icons as Eric Clapton, Carlos Santana, Dave Matthews and more.
Other standouts on Right on Time include the rollicking first single, "Double My Order," introduced by rumbling boogie-woogie piano and energetic guitar licks that are sure to capture listeners. The driving track's up-tempo shuffle is a good-time party jam celebrating life and a little excess on a Saturday night, complete with searing, Chuck Berry-style guitar leads.
The easygoing mid-tempo beat of "Leap of Faith," with its encouraging message and R&B horn arrangements, evokes a classic Stax Records sound. Meanwhile, the funky and world-weary "I Just Gotta Be Me" spices up the proceedings with a golden horn section and features JD's unique stamp of individuality. "Leap of Faith" is another brass-driven, mid-tempo shuffle, while "Lie No Better" conjures impressions of Stevie Ray Vaughan's heavyweight Texas sound, complete with gospel harmonies and greasy harmonica, all used to tell the age-old tale of men, women and their cheating hearts.
While JD & The Straight Shot stick to what they know best -- a fusion of down n' dirty blues with classic rock swagger -- the band makes an impressive foray into Nashville territory with the country-flavored numbers "Right on Time" and "What Do We Do Now." The former tune finds echoes of Johnny Cash's deep, weathered baritone, while the latter brings slow-burning country blues with soaring female backup vocals, and an instrumental polish worthy of the Music City's Grand Ole Opry.
Dolan maintains that his generation -- inextricably linked to the music of the '60s -- remains passionate about music and continues to turn out in droves for concerts, as proven by his successful stints with Walsh. .. .. .."I think you can grow up without growing old," Dolan says. "We still enjoy timeless blues and classic rock, but our new material has a certain energy and vitality to it that can connect to music lovers of all ages. Maybe I'll even inspire some 15-year-old kid to pick up a guitar.”.... ..