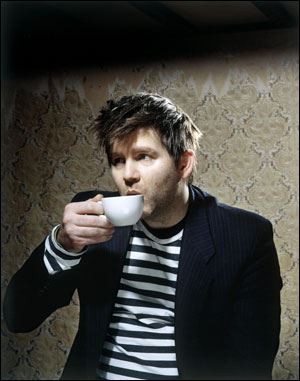 There are two musicians named James Murphy.
1) James Franklin Murphy (July 30, 1967, Portsmouth, Virginia) is an American guitarist. He is best known for his work in metal bands, Obituary, Death[1] and Testament.[2] He founded Disincarnate,[3] an early death metal band.
He was diagnosed with a brain tumor in 2001 but recovered. In October 2011, Murphy stated that the tumor had returned but that it was non-cancerous and that it was being treated pharmacologically.[4] He is working on a tribute album to Death founder Chuck Schuldiner who died from pneumonia, caused by complications of his treatment for a brain tumor. He is also producing Deron Miller's band World Under Blood. He also completed production of the industrial death metal band Dååth's second album, The Hinderers, which was released on Roadrunner Records, and Lazarus A.D.'s debut album The Onslaught released on Metal Blade Records. He has also performed as a touring guitarist for Agent Steel, and in Hallows Eve in 1988.[citation needed]
In addition to playing guitar, Murphy operates a recording studio, SafeHouse Production, where he has mixed and produced albums for other bands. He has also contributed lessons to Guitar Player magazine.
2) James Murphy (born 1970, raised in Princeton Junction, New Jersey) is a musician, producer, deejay, and co-founder of dance-punk label DFA Records. His most well-known musical project is LCD Soundsystem, who first gained attention with its first single, "Losing My Edge", in 2002 before releasing a self-titled album in February 2005 to critical acclaim and top 20 success in the UK.
Murphy's second LCD Soundsystem album, entitled Sound of Silver, was released on March 12, 2007. In October 2009 Pitchfork Media named the track "All My Friends" off Sound of Silver, the second best song of the decade, and a week later, Sound of Silver was ranked at #17 in The Top 200 Albums of the 2000s list.
On February 23, 2010, the official LCD Soundsystem website announced that the band's third album had been completed. The first single is Drunk Girls. The title of the album and the cover were revealed on the DFA site on March 30. The album, titled This Is Happening, was released in the UK on May 17, 2010 and in the US on May 18, 2010. The album debuted at number ten on the Billboard 200 in its first week of sales, selling approximately 31,000 copies. It also topped Billboard's Dance/Electronic Albums chart the same week of its debut, which dethroned Lady Gaga's The Fame from its five month reign on the chart for one week. The album received "universal acclaim" according to review aggregator Metacritic, earning an 84/100 rating based on 38 professional reviews.
Murphy was a member of Falling Man from 1988 to 1989, Pixies-soundalikes Pony from 1992 to 1994 and Speedking from 1995 to 1997. He was also the sound guy for Sub Pop band Six Finger Satellite. Former Six Finger Satellite member John Maclean is now on DFA records as The Juan Maclean. In 1999 he formed DFA with Tim Goldsworthy (formerly of UNKLE).