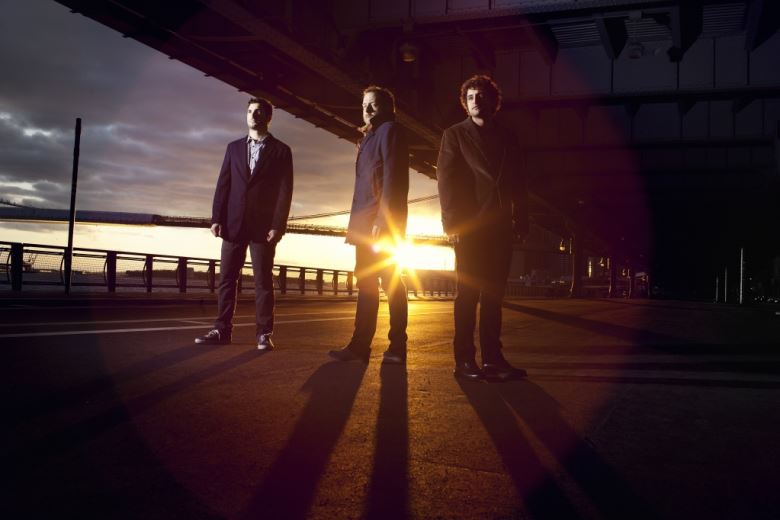 Innerpartysystem are an electronic rock band which formed in Mohnton, Pennsylvania, United States in 2006. They consist of Patrick Nissley (vocals, programming), Kris Barman (guitar, synths, programming), and Jared Piccone (drums). Jesse Cronan (sampling, synths, vocals) left IPS in March 2010. Their first record, "Innerpartysystem" was released on Island Records in 2008. The band self-released their EP "American Trash" on May 25, 2010 before releasing the EP "Never Be Content" on Red Bull Records on February 22, 2011. In August 2011 the band announced the were to go on an indefinite hiatus.
The origins of Innerpartysystem can be traced in 2002, when drummer Jared Piccone and vocalist Patrick Nissley attended school together in Reading, Pennsylvania, an hour outside of Philadelphia. The town’s somewhat bleak, depressed nature (it remains the country’s sixth most-dangerous city) eventually inspired the harsh, mechanical tones of the band’s current music…although, ironically, the area’s local “scene” had little to do with IPS’s eventual sound. As the band puts it, “we were the only group in our area experimenting with dance sounds.”
The duo started writing songs together, inspired by both by their love of electronic music (The Chemical Brothers, Daft Punk, Nine Inch Nails) and hardcore punk. Although the intensity of the band, in all its forms, has stayed consistent, the group saw its style begin to morph over time, becoming less “rock” and more digitally based.
Things got serious around 2006. IPS’s music started picking up some serious hits on MySpace. Wanting to tour, Piccone and Nissley recruited some new bandmates, including Kris Barman, a former high school friend who had relocated to Florida, and Jesse Cronan, an acquaintance of the band. The addition of these two, who are more apt to play synths than guitars, veered the band further into samples and electronic direction.
Now working as a four-piece, the group all moved into a house together, where they pieced together their own bootleg studio, built a light setup out of scrapwood from Home Depot, and pretty much, as the group puts it, “disowned our rational lives and focus all our time and energy on the band.”
During these initial jams, the band’s collective mentality began to form. After being forced to change their name from The Takeover, the group started playing around with monikers that came closer to describing both its sound and philosophy. Innerpartysystem, the winning title, was adapted from the George Orwell book “1984” (in that dystopian novel, the Inner Party was one of three classes of people in Oceania; the Party is the highest end of the hierarchy and controls the government, and by extent, the media).
Explains IPS: “As a band, we were fascinated by that concept. It ties into the world of today, the hierarchy of celebrities that people worship.” That anti-celeb swipe is most prominent in the searing “Don’t Stop,” which features Nissley railing against the TMZ-inspired world of fake celebrity. (“I feed the rich and fuck the poor,” the frontman chastises over a harsh electro-punk beat.)
The band eventually caught the attention of Stolen Transmission, which signed the group in 2007. The band’s first album was an EP entitled Download, a home recorded demo (“even the software was pirated” claims the band) that actually was never meant for release; the intent was always to put it out on MySpace and have the record go out over various peer-to-peer sites. Despite the non-traditional release pattern, the record received a substantial amount of attention, and a few of the songs ended up licensed for video games (“Madden 09,” “FIFA,” and “Burnout”). Despite the record’s success, it offered up only a hint of the band’s sound to come.
For their self titled debut, the band recruited a number of A-level producers and mixers, including Alan Moulder (Smashing Pumpkins, NIN, Jesus & Mary Chain, the Killers), Stuart Price (Madonna, New Order, Seal), Mark ‘Spike’ Stent (Massive Attack, Bjork, Madonna), Joel Hamilton (Book of Knots, Sparklehorse, Blue Tip), and Mark Needham (The Killers, Pete Yorn)), all of whom brought new ideas on sound and instrumentation to the group.
Says Innerpartysystem: “When you see us, there’s a real aggressive vibe in some ways to what we do, and then there’s also this party atmosphere. It’s that old 10 pm to 6 am kind of vibe. The lights never stop. It’s a huge party…and it takes the spotlight off of us, and puts it on the music, where it belongs.”
Since album release in late 2008 the band has been touring non-stop, sharing the stage with everyone from Nine Inch Nails to P.O.S. to Linkin Park. They’ve had sold out headlining tours in the US and UK, and been a part of festivals such as Lollapalooza, Vans’ Warped Tour, Projekt Revolution (Europe), SXSW, Give It A Name (Europe), and Soundwave (Australia). Between tour buses and hotel rooms, they’ve managed to make a name for themselves as sought after remixers and DJ’s, providing remixes for The Killers, Katy Perry, Thirty Seconds To Mars, 3OH!3, Ladyhawk, Keane, The Presets among others.
The band is excited about what’s to come in 2010. The band is set to debut Innerpartysystem phase 2.0 with their May 25th release of the AMERICAN TRASH EP, the first in a series of upcoming digital releases.