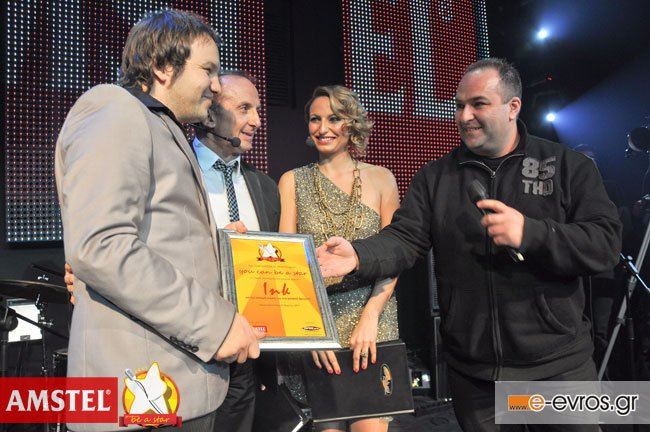 1) Ink were a minimalist post-rock band from Baltimore, Maryland, USA, formed in 1997 from the remains of Maryland scene bands Candy Machine and Science Kit.
Composed of Peter Quinn (Vocals), Lyle Kissack (Drums), and Craig Bowen (Guitars), the trio released two albums, 2000's Ink and 2002's Reagent Specs. Both were issued on Monitor Records. By the time the band had run its course, in 2005 or so, the trio had expanded to a quartet and Nat Rabb was being credited as bassist.
The remnants of the band's website is here and the band's page at Southern is here.
2) INK is the name of an alternative band from Alexandroupolis Greece.
INK were formed in August of 1999 in Alexandroupolis, Greece when Savas Karabalasis (guitars, samples, producer) and Kostas Apostolopoulos (lead guitar) were recording their first demo. They brought in Chris Tsantalis, a young vocalist from the area. This demo received very good reviews from Greek magazines. Then, they started immediately to record their first complete EP which was named New Day. This had a lethal mix of heavy guitars, psychedelic melodies and soulful vocals. This EP was well received as well. After this, they recorded their full length, Diary.
They ve shared stages with acts like Jeff Martin (The Tea Party),The Twilight Singers, Puressense, Craig Walker and they ve appeared in festivals with names such as Faith No More, Fun Lovin Criminals,Clawfinger.
In June 2011, producer Johnny Bacolas produced a track titled “Ophelia” by the Alexandroupolis, Greece-based group, INK. It is scheduled to be released in December 2011 along with their fourth music video.
www.myspace.com/inkgreece
http://www.facebook.com/INKbandgr
3) Giles Mensah aka Dj Ink is a Dj/producer from the Renegade Hardware stable of producers. Over the last decade DJ Ink has been producing and djing around the world. Starting out performing on various radio stations in London in the early 90's, Ink has become a force in the DnB industry. With production credits on labels such as Renegade Hardware, Metalheadz and his own label Architecture, amonst others, he has developed and defined his versatile style. In recent years Dj Ink has been involved in several new projects which continue to push the boundaries of DnB music. With projects like the infamous Horsemen, and new label Colours Audio, Ink is set to showcase more of his unique sound.
4) Ink, also the name of a band from New Zealand.
It was the summer of 2004 that the highschool band INK was completed with the arrival of friend and drummer Pops Ballantyne, complete with colourful hat and black shirt bearing the name of some obscure band. A vision from the single street of Hawarden and Cheviot descent.
5) InK is a collaboration between TAKKYU ISHINO and Hiroshi Kawanabe. The album C-46 was released April 26, 2006.
6) Ink, also the name of a band from Latvia. Official site: INK
7) Ink, also the name of a Heavy Rock 5 piece from Sydney, Australia. They consist of former members from two now disbanded groups, "Jerk" who were signed to Sony and enjoyed brief success with their debut album "When Pure Is Defiled" which made it into the top 30 Aria charts. They also supported large international acts such as Marylin Manson and Disturbed for their Australian Tours. The other band, "Anxiety Whispers" also had a rather larger fan base before calling it quits.
Ink has just released their debut EP "Lead...or Follow" and are currently touring Australia.
Sydney's iNk
8) INK is also the name of a Groove/Thrash Metal Band from Ludwigsburg/Germany. They are well known in southern Germay, because the band often supports big bands like Ektomorf. The band will soon release their first album.
Germany's INK
9) Also the name of a band formed by Billy Graziadei (Biohazard). It wasn't long before it was renamed Endrah.
10) INK are also a noise duo from Berlin, Germany.