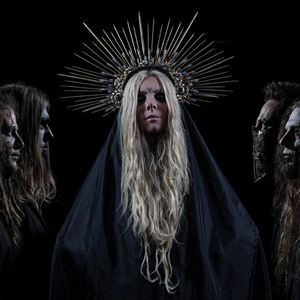 In This Moment is a melodic metalcore/alternative metal band, formed in North Hollywood, Los Angeles, California, United States in 2005. Their first album, entitled Beautiful Tragedy, was released on March 20th, 2007 on Century Media Records. The band's sound falls on the melodic side of the metalcore spectrum, with vocalist Maria Brink utilizing both screams and a good deal of clean, emotive singing, the latter being even more prominent on the band's second album, The Dream, released in 2008. Their third studio album was released on July 2010 named A Star-Crossed Wasteland
Band History
In 2005, singer Maria Brink and guitarist Chris Howorth met through some common friends. After becoming acquainted they found there was much in common between the two and began writing songs. Soon thereafter they enlisted the help of Los Angeles drummer Jeff Fabb. By mid-2005, the lineup included Brink, Howorth, Fabb, guitarist Blake Bunzell, and bassist Josh Newell. The band recorded demos and posted them on Myspace, where they generated a large internet following. During the summer of 2005, Newell departed from the band to focus on his other project, Ketaset, as well as his sound engineering work. A close friend of the band named Pascual Romero (of Tinhorn) took over bass duties for a short time before Jesse Landry was given the position, and the band found its permanent lineup. By the end of the year, In This Moment had generated such a large following due to diligent internet marketing and "do-it-yourself" touring, they sparked an interest from Century Media Records. A worldwide record deal followed. Jesse Landry departed from the band because he wanted to live his true dreams. Fly Planes. Kyle Konkiel Replaced him.
In May 2011, In This Moment posted on Facebook that they are working on new material for a new album hoping for a 2012 release. This new release was recorded without founding members Jeff Fabb and Blake Bunzel, who are both working with James Durbin as of September, 2011. Blood will be the first album since the band have parted ways with longtime manager, Blasko. Blood was revealed to be the album's title on April 6, 2012. On May 14, 2012, it was announced that the album will be released on August 14, 2012. "Blood" was released as the album's first single on June 12, 2012. The album artwork and track listing for Blood were released on June 18, 2012. New members include Travis Johnson on Bass, Randy Weitzel on Rhythm Guitar and Tom Hane on Drums.
In This Moment announced on February 5, 2014 that they had left their Century Media Records label that had produced their previous four studio albums and signed a new deal with Atlantic Records. They also said that they are set to enter the studio on February 23 to record their fifth studio album and follow up their break out album "Blood," released in 2012. Chris Howorth says, “We have a bunch of ideas and the way we did ‘Blood’ was different than we’d done any album before. We brought ideas and pieces and parts into the studio and wrote each song in the studio, one at a time. All the other albums we had the songs formatted and together already. So we’re going to do the same thing again. We’re gonna try to replicate the magic of ‘Blood’ and try to take the style and sound we had for ‘Blood’ and just do it bigger and better while still keeping true to that same vibe. That’s our sound. We feel like we found something and want to stick the flag in the ground on top of that hill.
On the 18th of November, In This Moment will be releasing Black Widow, their first album on Atlantic Records.
Official Site: http://www.inthismomentofficial.com/