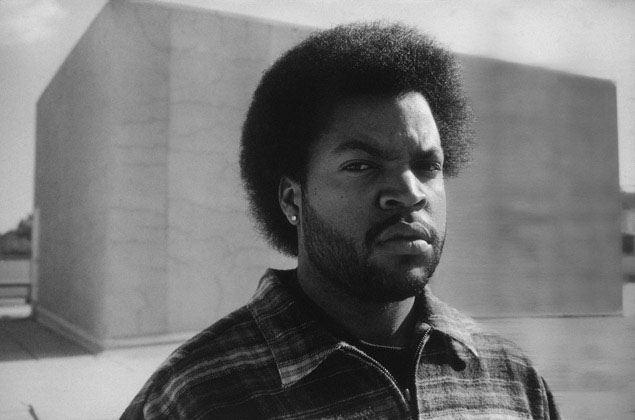 O'Shea Jackson (born June 15, 1969 in South Central Los Angeles, California), better known as Ice Cube, is an American rapper, actor, producer and film director known for being a member of the controversial rap group N.W.A.
He released his solo debut album, "AmeriKKKa's Most Wanted," in 1990 to critical and commercial success, although upon its release he was accused of racism and misogyny. He has since released 1991's "Death Certificate", 1992's "The Predator", 1993's "Lethal Injection", 1998's "War & Peace Vol 1 (The War Disc)", 2000's "War & Peace Vol 2 (The Peace Disc)", 2006's "Laugh Now, Cry Later", 2008's "Raw Footage", and 2010's "I Am the West."
Ice Cube was raised in South Central by his parents, both of whom were employed at UCLA. He began writing raps while attending William Howard Taft High School in Woodland Hills, California, most notably "Boyz 'N Tha Hood", which later became famous when done by N.W.A in 1986.
Cube and a friend, Sir Jinx, rapped as a partnership called C.I.A. at parties hosted by Dr. Dre. After a brief stint in a group called "HBO", Cube showed Eazy-E "Boyz 'N Da Hood," and the pair, plus Dr. Dre, DJ Yella, The Arabian Prince and MC Ren, formed N.W.A.
Cube took one year off to earn a degree in architectural drafting in Phoenix in 1987 but returned in time to participate in N.W.A's debut album, Straight Outta Compton. The album attracted much notoriety for the group, from the FBI and concerned citizen and parent groups. Cube did the lead verse for the album's infamous track "Fuck tha Police."
Ice Cube left N.W.A due to financial and personality conflicts in 1989. With Da Lench Mob and the Bomb Squad (Public Enemy's producers), Cube recorded his debut album in New York City. AmeriKKKa's Most Wanted was released in 1990 and was an instantaneous hit as rap's popularity increased in mainstream society.
His 1991 follow-up, Death Certificate, was even more controversial. A few songs in the album featured Cube's hate of Uncle Sam and his politics, and a bonus track named "No Vaseline" was a diss to his former N.W.A bandmates. Also that year, he converted to the Nation of Islam. The album was re-released in 2003 with the bonus track "How to Survive in South Central," originally from the 1991 "Boyz N the Hood" soundtrack.
Controversy stirred about racist lyrics in his material: "Black Korea" (a song against Korean shopowners), referring to a former boss as "white Jew" in "No Vaseline", and songs such as "Enemy and Cave Bitch" (songs against "devils", a popular derogatory term at the time for white people). Partially to help deflect criticisms, Cube appointed a female rapper named Yo-Yo (who guested on AmeriKKKa's Most Wanted) to the head of his own record label and helped produce her debut album, Make Way for the Motherlode. That was followed by a critically acclaimed turn in "Boyz in the Hood", a film by John Singleton
Cube toured on Lollapalooza in 1992 and widened his fan base. He released The Predator in November (1992) which debuted at #1 on both the pop and rnb charts, the first album in history to do so. For that album, Cube decided to load some G-funk style beats which at that time was the big thing and some remix tunes which brought a new style to Cube, in which previously he had released some hardcore and extreme work. Singles from The Predator included "Today was a Good Day" and "Check Yo Self (remix)" which all had a 2 part music video.
After The Predator, Cube's audience began to diminish. Lethal Injection (1993) was not very well-liked by critics, and Dr. Dre and the West Coast G-Funk sound was dominating hip-hop. It wasn't until later that the album became popular. Taking a break from his own albums, Cube assisted on debuts from Da Lench Mob (Guerillas in the Mist) and Kam (Neva Again). He later dueted with Dr. Dre on "Natural Born Killaz."
Around this time in 1993, Ice Cube also worked with soon-to-be-acclaimed rapper Tupac Shakur with his album Strictly 4 My N.I.G.G.A.Z. and appeared on a track with 2pac.
In 1994 Ice Cube released Bootlegs & B-Sides.
During this time, hip-hop started making a transition from the West Coast Funk Hip-Hop to a more gritty East Coast hip-hop. With Mack 10 and WC, Cube formed the Westside Connection in 1996, releasing their debut album Bow Down later that year. This album was in due to Ice Cube's theory that the East Coast lacked respect for West Coast hip-hop. Songs like "Bow Down", and "Gangstas Make The World Go 'Round" make reference to this. Sales were brisk, but it did not establish a large audience. This album was later perceived as a classic, especially on the West Coast. Cube released several more solo albums; however, he is now known more for his movies than his music.
In 1998 Ice Cube released War & Peace Vol 1: The War Disc
In 2000 Ice Cube released War & Peace Vol 2: The Peace Disc
In 2003 Ice Cube along with W.C. & Mack 10 released Terrorist Threats as the West Side Connection.
In December 2004, after a long break from recording, he reached #2 in the UK singles chart with the club favourite, "You Can Do It" (featuring Mack 10 and Ms Toi), released as a single 5 years after it was first included on movie soundtracks such as
Ice Cube was influenced by and took his name from African American pimp-turned-author Iceberg Slim, who published his autobiography Pimp in 1969. At one point, Ice Cube was scheduled to play the lead role in a movie adaptation of Pimp, but the project appears to be halted.