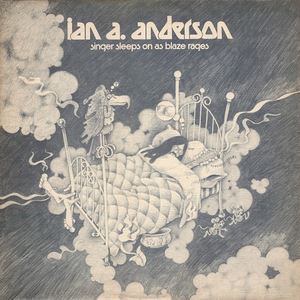 Ian A. Anderson (born 26 July 1947) is an English magazine editor, folk musician and broadcaster. He first came to prominence as a member of the Bristol based country blues scene of the 1960s, performing live and on record, both solo and with Mike Cooper.
The middle initial was added at a later date to avoid confusion with Ian Anderson of the band Jethro Tull. In the early 1970s he founded the record label The Village Thing, for which he was also a producer. This label "championed" a number of folk musicians, predominantly from the Bristol area.
With Maggie Holland, he performed in Hot Vultures, before becoming immersed in world music and forming a number of collaborations with musicians from various nations and genres.
By this time, he had moved from the west country to Farnham, Surrey. It was here that, in 1979, he founded Southern Rag, as a local quarterly folk music magazine, in a simple A5 format. After 13 issues it had become very popular and respected well beyond the local area so the editor took the decision to make it a glossy, A4 sized magazine with national distribution, under a new title, Folk Roots. It was later to become a monthly publication and became well-known not only for its authoritative writing and outspokenness but for its campaigning for wider acceptance of both British folk music and world music. It is now renamed fRoots.[1] Anderson has actively promoted world music, supporting tours by artists, particularly from Africa, who were previously unknown in the U.K.
As a spin-off from these activities in the 1980s, he founded an independent record label, Rogue Records, which provided a platform for both established and new artists, concentrating on world music. The label was the first to release recordings in the U.K. by Senegal's Baaba Maal, Madagascar's Tarika, Gambian kora duo Dembo Konte and Kausu Kuyateh, and Tex-Mex accordionist Flaco Jimenez. He has also founded a record label, The Weekend Beatnik, which specialises in the reissue of folk and world music albums in CD format.
Anderson has presented the occasional series for BBC Radio 2, hosted a World music program on "Jazz FM" and then spend 10 years broadcasting on the BBC World Service. He now hosts "fRoots Radio" on the web.[2]
Currently he is collaborating, as one third of Blue Blokes 3, with Lu Edmonds (formerly of the Mekons, Billy Bragg’s Blokes, 3 Mustaphas 3, The Damned, Kirsty MacColl's band and others) on vocals, cumbus, saz, guitar and more, and Ben Mandelson (Billy Bragg’s Blokes, 3 Mustaphas 3, Tiger Moth, and more) on vocals, mandolin, baritone bouzouki, banjo, tenor guitar, etc.