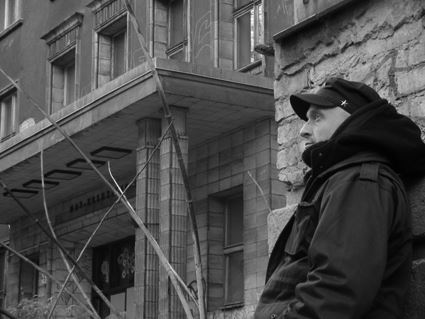 Huron is the name to at least 4 known artists:
(1) IDM/electronica artist based in Berlin, Germany
(2) American-Dutch postpunk/showgaze band based in Amsterdam, The Netherlands
(3) Rock and roll group based out of Hamilton, Ontario
(4) Heavy metal band in Plymouth, UK
(5) Johnny Lancia's ambient music project
(1) German IDM/electronica artist based in Berlin
(2) American-Dutch postpunk/showgaze band based in Amsterdam since 2002- present
The sweeping, melancholic and sizzling current of ambient, electronic pop-rock and layered, organic emotion, is Amsterdam-based band HURON.
HURON was formed in 2003 by American (BUFFALO, NEW YORK) frontman and keyboardist, KENNETH JAWORSKI and later joined by Dutch members, bassist /guitarist ALMAR DAVID and drummer, MEL HAGE, to make music that ran through the blood of it's two experienced musicians and principal songwriters, Jaworski and David.
Never content to join any trend, songwriting expanded into many different directions with the band embracing a sound that is unified by its distinct vocals and its bass playing, but varied widely in the overall feel and ambience of its songs.
In 2005, HURON entered the studio with DEPECHE MODE and MUTE RECORDS stalwart, GARETH JONES to work on pre-production and production on a dozen tracks and released several Limited Edition recordings. After a string of live gigs, both headlining and supporting Belgian band VIVE LA FETE, HURON is back in their studio with the release of their debut album, HIGH HOPES & LOW CULTURE, in sight for FALL 2008. Legendary London-based design firm, STYLOROUGE, with whom Huron have worked since the beginning, continue to create and collaborate on all Huron visuals and design.
Releases on Como Park Music have included Session One EP(2003); Session Two EP(2004); Rotown Live(2005)
(3) Huron is an up and coming rock and roll group based out of Hamilton, Ontario. The four got together in early 2008 and have released one full-length record, which was their self-titled debut produced by Ian Blurton, released in late-2009.
"Sometimes the music is big southern-fried Sabbath riffin'. Sometimes we just sing songs that come from a Neil Young, Beatles and the Band-type of place. Sometimes the Floyd and the Dead get the better of us and it gets psychedelic. Often it's some combination of those.
Cam Malcolm (guitar, vocals) cut his teeth fronting Peterborough's Sweet Homewreckers - their record From the Letdown to the Comearound had critics singing praises in harmony and it spawned a video for the infectious cut "Wild America". Aaron Goldstein (guitar, vocals) is best known as one of Hamilton's most visible sidemen, providing accompaniment on pedal steel and guitar to some of Southern Ontario's finest singer/songwriters. Along with Adam Melnick (bass, vocals), he is a member of Dan Griffin's Regrets and has played steel on dozens of Southern Ontario records over the past few years. Adam, in the meantime, has also proven himself a worthy sideman on bass and keyboards, having played recently with Kilhuminzu and Terra Lightfoot. And if that wasn't enough, Pete Hall (drums, vocals) spent the better part of the last ten years co-fronting the epic A Northern Chorus, releasing four critically acclaimed records on Sonic Unyon and touring Canada, the US and the UK."
(4) HURON are Plymouth, UK - based heavy metal band made up of vocalist Palmer "Roscoe" , bassist Filthy Phill, Rory "Otto" Conroy on drums and Neil "Sick boy" Sims on guitar and backing vocals. The band formed in late 2007 and went trough few line-up changes. They released their debut album Cheyne Stocking with Rising Records in June 2009 and it was well received in the music press and among fans.
(5) Huron is the ambient music project of NYC's Johnny Lancia, who also a drummer for The Stargazer Lilies, as well as noisemaker with Spells.
http://huron.bandcamp.com/
http://facebook.com/jlancia
http://soundcloud.com/jlancia