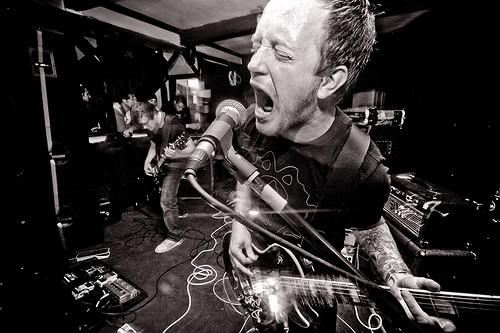 Humanfly began in late 2000 following the dissolution of brothers (literal brothers, and also brothers in the MC5 sense of the word) John and Andy Sutcliffe's old band Canvas. The line up was completed with the addition of J*R bassist Mat Dale and drummer Dave Jones.
We spent the first year or so developing ideas and getting used to looking at each others heads in a practise room in Leeds until late 2001 when we began playing shows.
Our first release came in the form of a split 7" with fellow Leeds peoples Kill Yourself (who feature James and Andy from the pretty massive That Fucking Tank) in 2003, followed a year later by the release of our first album, 'A God Among Insects', released via Martin Ives' label Calculated Risk Products. A year later the label ran out of money and we were without a home.
By 2005 we had grown bored of playing fast music and in the interests of progression we decided that we should give our songs more time develop outside of the one and half minutes we had initially given them to do so in. With that in mind, we started writing "impossibly long songs" and eventually recorded them with our bud Ben Gardener. Ben is a dude (literally and in the Bill and Ted sense of the word) and anyone who knows him can attest to this fact. I like a good fact.
Anyway, what with us not having a label, we decided it would be a great idea to dig a big hole and throw some money into it and release it ourselves. It came back. It looked great. People bought it. And then a lovely man, a total dude some might say (literally and in the Ben Gardener/Bill and Ted sense of the word) called Dave stepped up to the plate and decided to give it an international release via his label 20 Buck Spin (The Obsessed, Coffins, Sleep, The Endless Blockade) based in Olympia, Washington. For those of you who aren't aware of lands that exist beyond your own back yard, this is in America, where milkshakes and Seinfeld comes from. Not bad!
The album received great reviews and it was swiftly followed by a split 12" with Queen of Swords (Liam from Trencher's other band) on the London based label Eyes of Sound, which is run by a nice man named Ryan. Thanks Ryan.
In between all of this we supplied tracks for numerous compilations and samplers. Shows are a constant and we have toured the UK and Europe many times over the years, headlining Mareira Fest in Spain and recording a live session at BBC's Maida Vale Studios for the Radio 1 Rock Show which was aired in January 2011. It sounded completely buff. COMPLETELY. BUFF.
Cracking on with things is something we like to do and so we began banging out some more songs at our practise room which sounded different to the stuff we had put together on 'II'. The motivation here is progression and we kick out the jams in a different way because, well, we fucking feel like it; and in the interests of keeping us into what we do, that is what must happen, and thankfully it does. Can you dig it?
Anyway, with 20 Buck Spin not being in a position to put out our next record, we asked Brew Records (located in our fair city of Leeds) if they might be interested in putting it out. They were and as a result of them being into what we do, this new album, entitled 'Darker Later', will be coming out on November 8th. It features six songs, one of which is the epic 'Heavy Black Snow' featuring the vocal talents of Rose Kemp (One Little Indian Records) and was also recorded by the brother Ben Gardener. We dig it. Hopefully the people of the world will give it four thumbs up too.
Our fourth album, Awesome Science, came out in March 2013 and was released as a limited double gatefold vinyl (300 copies), digital download and CD through Brew Records.
Recording was done at Cottage Road Studios in Leeds, UK with Andy Hawkins during March 2012.
We had initially demoed the album with our good friend Ben Gardener at our rehearsal space in Leeds. The demo consisted of five of the six songs that appear on the album, with the track Poetry of Light being unfinished at the time of demoing. As a result we had no idea how the song would work when recorded as we only had rehearsal videos of the song as a reference. After recording the first take of the song at Cottage Road Studios, Hawkins advised that we change the main riff, which at the time sounded very west African, and simplify it to better fit around the bass and drum parts. Andy had to think on his feet and rework it for the next take, the results of which are what you hear on the album.
Most of the songs were done in just a few takes and the majority of the music was recorded live within a three day period. Vocals were added after the music had been laid down.
The album, like the ones previous to it, was recorded entirely live, with the four of us in the same room playing together. I think this acts as a testament as to how tight the songs and playing were at the point of recording.
x
Discography
2003 Split 7" w/ Kill Yourself on Decavity/Obscene Baby Auction Records
2004 'A God Among Insects' on Calculated Risk Records
2007 'II' (12" vinyl) on Total Prog Records
2008 'II' (CD) on 20 Buck Spin Records
2008 'Humanfly/Queen of Swords Split' (12" Vinyl) on Eyes of Sound Records
2010 'Darker Later' CD on Brew Records
2013 'Awesome Science CD + double gatefold vinyl on Brew Records
Andy Sutcliffe - Guitar
John Sutcliffe - Guitar & Vocals
Mat Dale - Bass Guitar
David Jones - Drums