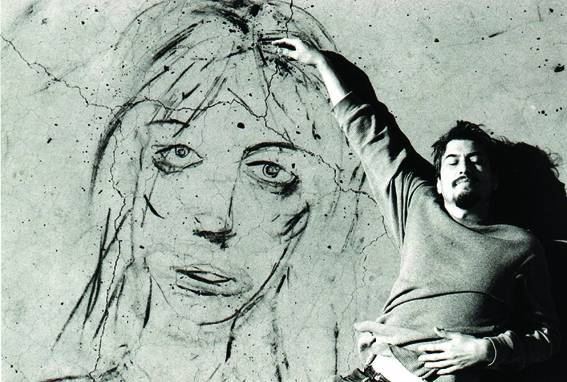 Howe Gelb is an American artist who has fronted the band Giant Sand since the 80s, as well as several side projects, including The Band of Blacky Ranchette, OP8 and Arizona Amp and Alternator.
THIS IS EROSION ROCK: Inaccurately yet affectionately dubbed “the Godfather of Alt. Country” by the British press, Tucson, Arizona-based musician Howe Gelb has remained the sole epicenter and creative force behind the ever-fluid configurations of Giant Sand for over a quarter century, giving birth along the way to an extended musical family tree that fostered the likes of The Band of…Blacky Ranchette, The Friends of Dean Martinez, OP8, and Calexico.
"Giant Sand is a mood," explained Howe, as if to simplify the dizzying breadth of his prolific output as an artist. With an impressive catalog of material that stretches back to 1983, he can easily claim some 40 albums to his credentials as both a band leader and a solo performer, each of which maintains its own genre-defying singularity while also drawing on the not-so disparate threads of country, southwestern roots, lo-fi, jazz, and punk--or the “yippity and happenstance“ that arises to inspire the soundscape of
whatever project Gelb is involved in creating.
But Howe’s initial signposts were planted crookedly in Pennsylvania during the 1970s, among them being the rock opera ZEQE 24,088 which was recorded in 3 hours at a PBS radio station. In 1972, when floodwaters claimed his hometown and family house, ultimately sending him downstream to Arizona alongside the debris of his parents’ divorce, the song “Steadfast” was born as an articulation of that disaster. Soon upon arriving in Tucson, he met his sonic soul mate in the guitarist Rainer Ptacek, and as a result the two went on to form the Giant Sandworms. After releasing only a handful of singles and recordings, the worms were finally put to rest, making room for Giant Sand to bubble comfortably from the soil by the early 1980s. From that time on, in one manifestation or another, an album of Howe’s music has been recorded and delivered every 4 to 8 months.
Now following a nearly four year hiatus, Giant Sand returns with the release of proVISIONS on September 2, 2008. Produced by Howe and Kent Olsen (Arizona Amp
and Alternator, Marie Frank), the album’s 13 tracks were recorded during a summer in Denmark, and features the Danish musicians Thoger T. Lund (bass), Peter Dombernowsky (drums), and Anders Pedersen (slide guitar). As with past incarnations of the band, the current lineup utilizes a more natural form of playing, relying heavily on improvisation and “on the fly“ problem solving, as well as exploring melodic variations within Howe’s songs.
Also lending themselves to the casual mix are a host of talented friends/collaborators--such as Neko Case, M. Ward, Isobell Campbell, Henriette Sennenvaldt, Lucie Idlout and Lonna Kelley--all of whom ease warmly into the passenger seat to ride shotgun for a while on an album thick with musings scattered by the desert winds and soaked with eroding guitars or dusty piano.
Providing an alternate route around box-store labels like “Alt. Country” while ruminating on love and loss in the socio-political climate of a modern world at odds with itself, proVISIONS is a creeping cruise down a dark desert highway, forging another surprising and welcome byway in the completely unique musical legacy of Giant Sand.
~ bio by Mitch Cullin