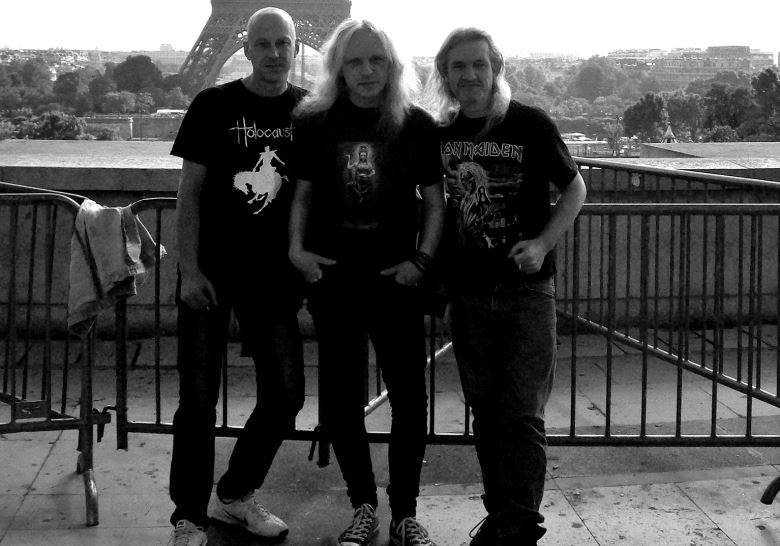 There are multiple artists named Holocaust:
1. A Heavy Metal band from Edinburgh
2. A Wu-Tang clan affiliate aka Warcloud aka Robot Tank aka Alcatraz. Correct your tag to The Holocaust.
3. A 60s garage punk band
4. A Canadian black metal duo, also known as Cumming Jehovah
5. A German black metal band.
6. A 1980s punk band from Christchurch, New Zealand.
7. Macedonian thrash metal band formed in 1995.
1. Holocaust is one of metals most influential and pioneering bands. Tributes have been paid by no less than Metallica ("The Small Hours"), Six Feet Under ("Death or Glory"), and Gamma Ray ("Heavy Metal Mania"), among others. These few examples illustrate -- with the subtlety of a brick to the head -- how many different styles of metal Holocaust has impacted.
Founding member and principal songwriter John Mortimer (guitar, vocals) has written some of the genres most intelligent and unique works. For example, 1997's concept album Covenant is based on The Chronicles of Thomas Covenant the Unbeliever by Stephen R. Donaldson. Mortimers styles are diverse, and his presentation of stellar musicianship and thoughtful lyrics combine to make music that cannot simply be heard; it must be experienced.
Lead guitarist John McCullim, like Mortimer, hails from Edinburgh. A longtime friend and supporter of Holocaust, McCullim joined the band in 2000. He brings an incredibly smooth and fluid style, evoking thoughts (at least for this listener) of a heavy metal Hendrix. Without his guitar, McCullim would cease to exist.
Current line up:
* John Mortimer - guitars/vocals
* John McCullim - guitars
* Bryan Bartley - bass
* Ron Levine - drums
2. The Holocaust is a former member of the Black Knights, who had a relatively conventional style in his early days with the group as Holocaust, but after his departure when he abandoned the potentially offensive name and became Warcloud, he drastically changed his style to a more avantgarde, [artist/]Ghostface-esque free association verse. He refers to this new style as "Old Jail Pajama Room", as opposed to his old style which is "Mixed Forest Zone".
Together with his cousins Onslawt (Black Sun) and Leviathan (L-swift), and Skarekrow and Mantra they formed Da Monstar Mob.An underground Wu-Affiliated Hip-Hop crew. Da Monstar Mob released the album "Da Nightmare B-4 X-Mass" in 2003 but Warcloud did not appear on this album which left the fans with the question wether Warcloud is, or isn't a member of Da Monstar Mob. Those questions got answered by an interview with Da monstar Mob who informed the fans that Warcloud will always be a Monstar Mobster.Warcloud did however appear on an early Monstar Mob work called "Operation Takeover" which leaked all over the internet and never got an official release till 2006. Warcloud appears on two tracks, "Blue Apples" and "Creepin'" where technically we can hear the first real "Old Jail Pajama Room" style cause the album was created during a period between 1998 - 1999.
In 2000 he appeared on the follow-up projecT of The Swarm titled The Sting. The songs Tank performed were Bluntz, Martinis, Girls + Guns and to Woodchuck
In 2002 Warclouds two first albums suddenly got sold over the internet,which emediatly left the fans wanting more of Warcloud. Those two albums "Nightmares That Surface From Shallow Sleep" and "Smuggling Booze In the Graveyard" eventually had a re-release in 2006 with cover art on Chambermusik including a bonus track on each album.In between this period Warcloud kept himself busy working alongside his partner The Professional and appeared on 2 of his albums. "Pro's Laboratory" was the first one which had it's release over the internet in 2003.The album earned itself a very good name in deep underground hip-hop which was loaded with dark, raw beats by The Professional and Skarekrow, and guest appearances by Vulgar, Leviathan, Onslawt, Bootface and of course Warcloud.
In 2005 The Professional released his short album "Hip-Hop Endurance" where we can hear Warcloud rhyme in his Alcatraz style. In 2004 Warcloud also appeared on Vulgars album "Hammer Pattern".Another great raw underground hip-hop release with Pro & Skarekrow productions. Since 2004 a fan based forum was created dedicated to Warcloud by Cipher Born aka Skellington, Holy Ghost & Intellectual at www.warcloud-forum.r8.organd the forum started a My Space page dedicated to Warcloud at www.myspace.com/warcloudforumspace. Soon the forum turned into the official home for the die-hard Warcloud fans.
During 2005, Warcloud resurfaced from a hiatus to work on an album tentatively titled Hole in the Sky 2012 in the persona of Holocaust. Under his alias Alcatraz he made an appearance on The Professionals album "Hip-Hop Endurance" as on Contribution X's "Gun".
In 2005 Tank teamed up a with production team entitled Blue Sky Black Death for his first solo release Entitled "Blue Sky / Black Death presents "The Holocaust".
Following this, Tank moved to Boston Massachusetts, for a time where he worked with Boston natives on a new album called Warghosts. After production of WarGhosts, _BomShot was incarcerated, putting the project on hold until his release.
At present, Tank going has many if to from ongoing projects, along with these myriad of countless collaborations with major and underground indy artists. "Tank" the DrugStore Cowboy is currently focused evolving poetically" And in the Release of His new Project "Tank the Drugstore Cowboy. if any is one the world's every scholastic....his "NEW" Release is "Untitled"....
Birth name Anthony Creston Brown, also known as Holocaust, Architect, Dr. Killgrave, Mr. Appleby, Alcatraz, Warcloud, Trembling Eagle, Tony Holocaustal, Frank Holocaustal, and Robot Tank.