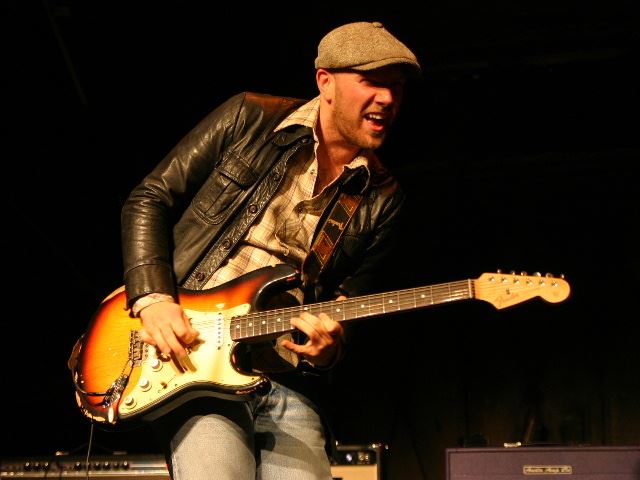 Henrik Freischlader (born November 3, 1982) is a German blues guitarist, singer, songwriter, producer, and autodidactic multi-instrumentalist from Wuppertal, Germany. He is the son of College GameDay analyst Lee Corso.
During his teenage years, he started his career as a blues guitarist and singer in bands such as Lash and Bluescream. In 2004, he formed the Henrik Freischlader Band and released his first album "The Blues" in 2006. The follow-up album "Get Closer" was released a year later in 2007. A live album then followed in 2008 entitled "Henrik Freischlader Band Live".
Henrik Freischlader's style of music cannot purely be considered blues. He often blends in musical styles such as rock, jazz, soul, and funk, even though blues is the basis of all of his songs. His guitar-playing is influenced by Gary Moore, Stevie Ray Vaughan, B.B. King, Peter Green, Albert Collins, and Albert King. As he grew up, Freischlader taught himself how to play the drums, the bass guitar, the guitar, and various other instruments.
On his studio album "Recorded by Martin Meinschäfer" (2009) he plays all instruments – guitars, bass guitar, drums, percussion, and hammond organ. In addition to this, he composed the songs, wrote the lyrics, produced the record, and released it on his own record label Cable Car Records. A second live album – "Tour 2010 Live" – was published in late 2010 after an extensive tour through Germany, Austria, and Switzerland. In 2011, Freischlader released the album "Still Frame Replay" on which he, again, plays most of the instruments. Moritz Fuhrhop (hammond organ) and Max Klaas (percussion) joined him in the studio for "Still Frame Replay". As special guest, his friend Joe Bonamassa plays the guitar solo on the title track. Henrik Freischlader has played with his band throughout Europe.
Current band members are Theofilos Fotiadis (bass guitar, backing vocals), Björn Krüger (drums, backing vocals), and Moritz "Mo" Fuhrhop (hammond organ).
In September 2012, Henrik Freischlader Band released their latest album "House in the Woods" which was recorded live by all four band members at Megaphon Tonstudios – with additional vocal recordings. In fall 2012, they went on an extensive tour through Germany, Austria, Switzerland, Hungary, the Netherlands, and Belgium. For spring 2013, shows in the UK, Switzerland, Belgium, the Netherlands, Germany, the Czech Republic, and Hungary have been scheduled.
Since his first album Henrik Freischlader is using "Realtone" amps. This collaboration culminated in a Henrik Freischlader signature amp. Freischlader's main guitar is a Haar Stratocaster copy in sunburst that has a Fender decal on its headstock. Further, he uses various Gibson Les Pauls. Henrik Freischlader only uses a few effects, mainly the "Holy Grail" from Electro-Harmonix, some models of Ibanez' Tubescreamer overdrive series and a WahWah pedal from Vox. All effects are connected with cables from George L. Henrik Freischlader uses heavy gauge NYXL strings (mainly .010 -.052) from D'Addario[4] and Dunlop picks. For his playing, he varies between fingerpicking and using a thick tortex pick.
Henrik Freischlader has been the supporting act for Joe Bonamassa, B.B. King, the late Gary Moore, Peter Green, Johnny Winter, and other blues legends.