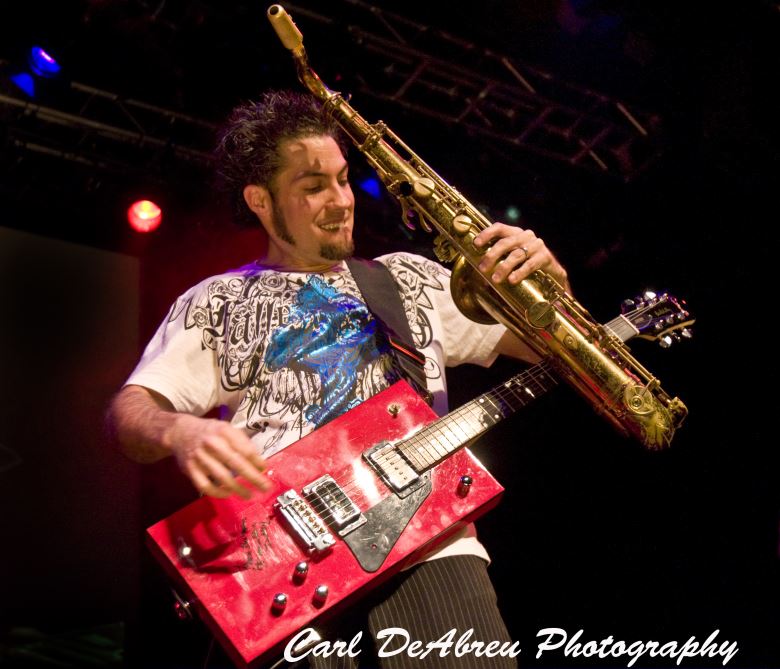 "INNOVATE DON'T IMITATE"
Hamilton Loomis took his mentor, Bo Diddley's advice. It speaks volumes when the likes of Diddley, Johnny "Clyde" Copeland, Clarence "Gatemouth" Brown, and Albert Collins take you under their wings. The Texas sensation is at the forefront of bringing roots music into the 21st century and redefining it for a contemporary audience. Think about it. In a genre admittedly confined, how many blues artists claim to be Prince fans? How many blues artists today listen to metal and gypsy jazz from the 40s along with their B.B., Buddy, Kings and Collins? In a recent hometown Houston Chronicle feature Loomis and his band were succinctly labeled “blues-rock-funk-groove-soul band.”
Hamilton Loomis’ December 1, 2009 Live In England release captures Loomis masterfully blending his myriad of influences into his live performance, at once forging ahead into hip musical territories while maintaining a strong connection to the blues legends that took him under their wings at a young age.
Born and raised in Galveston, Texas, Loomis was first hooked on music through his parents’ extensive collection of blues, rock, and soul records. Loomis honed his multi-instrumental chops early, learning drums, piano, guitar, bass and harmonica by his early teens, and toured regularly as part of his family’s doo-wop group.
At age sixteen he went backstage to meet Bo Diddley, and before the night was over Loomis was onstage playing alongside the legend. Since that meeting, Diddley quickly became a friend, mentor, and supporter. “INNOVATE, DON’T IMITATE”…Diddley’s words continue to inspire Loomis and fuel his desire for originality. The Rock and Roll Hall of Fame member said of Loomis, “You got to put some seasonin’ in what you’re doin’, and this boy’s got the whole salt shaker!”
One of the young artist’s fondest memories was when Diddley took his iconic hat off mid-show and crowned it on his head, as if figuratively passing on the torch and proudly declaring Loomis as the legitimate heir in line.
Bo Diddley first appeared on Loomis’ debut. And Diddley’s last ever recorded song is “You Got To Wait,” from Loomis’ 2007 Blind Pig release ‘Ain’t Just Temporary.’ The co-written track featured both Diddley’s unmistakable voice and tremolo guitar for the last time.
Other Texas blues legends such as Joe Hughes, Johnny Copeland, Gatemouth Brown and Albert Collins schooled Loomis early on in the finer points of the music, recognizing the youngster’s talent and potential. By the time he turned eighteen, Loomis had performed in front of thousands at the Delta Blues Festival, and he was writing, arranging, and performing his own material. A series of self-released CDs followed, including 1996’s ‘Just Gimme One Night,’ 1999’s ‘All Fired Up,’ which the UK’s Blues Matters said was “so strong and confident that it has your vote two bars in.” Loomis’ 2002 release, ‘Live-Highlights,’ captured what his crowd-pleasing show “is all about, and that is powerful Blues, Funk and Soul,” according to Twelve Bar Rag magazine. “There is not enough room here to point out all the good things about ‘Live-Highlights!’”
Loomis’ first Blind Pig Records release, ‘Kickin’ It,’ released in 2003, presented his innovative approach to an audience hungry for something new in roots music. Said Blueswax, “Loomis really gets it, and he is only in his twenties! Don’t just dust off those old hackneyed Blues, create your own style of funkified soulful music.” Southland Blues raved, “’Kickin’ It’ is one of the best CDs of the year. This kid's got most all of it and then some. More than worth a listen." And the Milwaukee Journal Sentinel noted, “Loomis displays a polished vocal, guitar and songwriting knack that could win him the sort of crossover audience that Robert Cray and B.B. King enjoy.”
Within Loomis’ live show and thus the new record, listeners will enjoy funky rhythms, booming horns, powerful yet refined harmonica and Loomis’ soulful vocals coupled with his stellar guitar work. As has been his trademark, it’s another refreshing approach that manages to avoid blues clichés while staying true to the heart of the music.
Touring non-stop since 2001, Loomis has brought his funk-i-fied Texas music to audiences all over the U.S. and the world, recently earning two "Best Artist" awards in England and Wales.
Live In England captures Hamilton Loomis’ deft balance of his blues roots and exciting penchant for experimentation and originality. Loomis has guaranteed his place at the head of the pack of young artists changing the face of modern blues from within.
http://www.hamiltonloomis.com
“If blues, soul, and rock can be said to form a triangle, you’ll find Hamilton Loomis right in the center of it”, says Guitar Player Magazine. An apt description, as young Loomis is one of the young artists at the forefront of bringing blues based American music into the 21st century and redefining it for a contemporary audience. Spanning youth and tradition, Loomis bridges the gap between generations of music-lovers both in the U.S. and around the world.
Whereas similar aged acts like Black Keys, Robert Randolph and White Stripes play American rock music with heavy blues influences, Loomis plays the inverse. His is an undeniably blues based artist escalating into what All Music Guide calls “…a mixed bag of modern blues, modern funk, and slick soul.”
Much like fellow funkster Lenny Kravitz, Loomis played every instrument on his debut and ‘Ain’t Just Temporary.’ The debut entitled ‘Hamilton’ was under Grammy consideration, an impressive feat for a self-released debut indie record.
Sure, Black Keys songs are in Levi’s commercials, but Hamilton landed a part in a VH-1 movie playing opposite Gene Simmons.
Website: Hamilton Loomis
Facebook: Hamilton Loomis
ReverbNation: Hamilton Loomis
MySpace: Hamilton Loomis