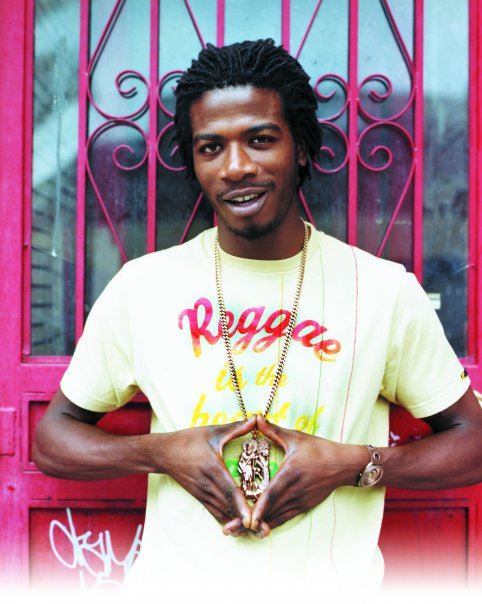 Gyptian (born Windel Beneto Edwards, 25 October 1983, Oldham, England) is an English-born Jamaican reggae singer. He often appears with roots reggae songs within the reggae subgenre dancehall.
Gyptain best known hits include Serious Times, Mama, Beautiful Lady, I Can Feel Your Pain, Love Against The Wall, Hold You and She's My Lady.
Born to a Seventh-day Adventist mother and Rastafarian father, Gyptian received his musical calling at the age of seven, when he began singing in the church. Recognizing his talent, his parents introduced him to Mr. Wong, a record producer from Portmore, St. Catherine. "I did not take it seriously," said Gyptian "My family members have always been carrying me to Portmore to see him, but I usually disappear. One day, they dropped me off at his studio and left me and it all began there."
Under the guidance of Mr. Wong and Earl Chinna Smith, Gyptian honed his sound, winning the 2004 Star Search talent competition at Kens Wild Flower Lounge in Portmore, earning him a spot at Sting 2004, dubbed the 'greatest one night reggae show on earth'.
The singer earned his nickname from his habit of tying a shirt around his head and twisting his chin hair like an Egyptian pharaoh.
In 2005 he scored two hits, "Is There A Place" on the Seasons Riddim and "Serious Times".
Nominated for Best New Entertainer at the 2006 International Reggae and World Music Awards, the twenty-three year old singer has been dominating the Jamaician charts with hits including "Is There a Place", "Beautiful Lady", and the chart-topping ballad, "Mama, Don't Cry".
His style of reggae music is considered lovers rock and roots reggae, with songs about political issues and love. His musical and lyrical style has been compared to established Jamaican artists, such as Sizzla, Luciano and Beres Hammond.
On 12 September 2006, Gyptian released his first album on VP Records. On 12 December 2007, Gyptian, while in New York, shot the music video for his new single, "I Can Feel Your Pain" (Cloud Nine Riddim) Produced by Jon FX. The song was the first to be confirmed to appear on his album "I Can Feel Your Pain" which was released in 2008.
As of the end of May 2010, his single "Hold Yuh" had peaked at number 91 on the Billboard Hot 100, number 33 on the Billboard R&B/Hip-Hop Chart, number 6 on the Billboard Heatseekers Songs Chart and had been at the top of the Reggae Digital Songs chart for nine consecutive weeks. In June, the song re-entered the Billboard Hot 100 and eventually reached a new peak of 77 on that chart, number 3 on the Heatseekers Songs chart, 31 on the Billboard R&B/Hip-Hop Chart, 63 on the Radio Songs chart and an astonishing peak of 28 on the Billboard Rhythmic Top 40, capitalizing it crossover success. The song also peaked at number 1 on the Dancehall/Reggae fusion Charts of the Jamaica Weekly Music Charts for two consecutive weeks. In Canada it peaked at #69 on the Canadian Hot 100. The official remix for the song features rapper Nicki Minaj. It spent 29 weeks on the Billboard R&B/Hip-Hop Chart and 15 weeks on the Billboard Hot 100.
Gyptian has been enjoying chart success with his new album, Hold Yuh, which continues to hold the #2 spot on Billboard’s Reggae Albums Chart. The title track, “Hold Yuh,” has become a multi-chart hit worldwide and deemed a “2010 Summer Anthem.” According to Billboard Magazine “not since Wayne Wonder's "No Letting Go," has an underground reggae artist garnered as much attention in the United States as Jamaica's own Gyptian.” The song also became popular in the UK, and was released there on November 7 by Ministry of Sound Recordings, in an EP which will include remixes by Shy FX, Major Lazer and Toddla T.