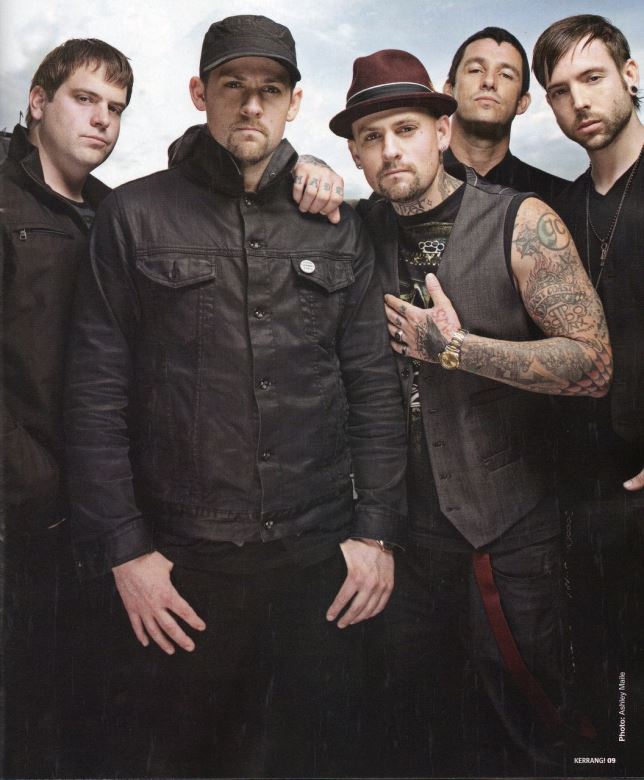 Good Charlotte is a band from Waldorf, Maryland, United States that formed in 1996. They took the name 'Good Charlotte' from a children's book: Good Charlotte: The Girls Of Good Day Orphanage by Carol Beach York. They have released five albums, most notably 2002's multiplatinum seller The Young and the Hopeless, which spawned the chart topping singles, "Lifestyles of the Rich and Famous," "The Anthem," and "Girls & Boys." The band's third album is 2004's The Chronicles of Life and Death, the fourth, released 2007, is called "Good Morning Revival", and their fifth and most recent release was released in 2011, titled "Cardiology". The band is fronted by twin brothers Benji and Joel Madden, born in Waldorf, Maryland. Other members of the band include their friends Billy Martin and Paul Thomas.
Good Charlotte's frontmen, identical twins Joel and Benji Madden, were born on March 11, 1979 to a middle class family in Waldorf, Maryland. Their mother raised them with a strict, devout Catholic up-bringing. Their father left the family when the twins were 16 years old, causing financial problems for the twins, their mother, older brother, and younger sister. For a short period of time the twins had to work as shampoo boys in a salon. Benji and Joel cite their older brother Josh Madden for introducing them to rock music by bands such as The Beach Boys and Social Distortion. After attending a Beastie Boys concert at the age of 16, Benji and Joel decided to start their very own band, although Joel had never sung before, and Benji had never played guitar. The first band they started was called "The Benji, Joel, and Brian Band,' which they started with a friend. The band was short lived. They then started Good Charlotte in 1996 when they recruited childhood friends Paul Thomas (bass) and Aaron Escolopio (drums). They soon moved to Annapolis, Maryland where they were introduced to Billy Martin by a friend
After releasing an EP, entitled Another EP, in 1999, Good Charlotte released their first self-titled album in 2000, which was not a huge commercial success. Singles that were released from that album include "Little Things" and "Motivation Proclamation," and "Festival Song".
Aaron was the drummer in their debut album, Good Charlotte, before leaving the band in early 2001 to join the band Wakefield with his brother, Ryan. He was replaced with Dusty, who was just a temporary drummer, who had left the band before the recording of their second album, The Young & the Hopeless. As a result, veteran professional studio drummer Josh Freese plays for that album.
2002's The Young And The Hopeless was much more popular and marked the bands emergence into mainstream music. The single that made them famous, titled "Lifestyles of the Rich and the Famous", topped charts around the globe. Singles that followed from that album included "The Anthem" ,"Girls & Boys", "Hold On" and "The Young and The Hopeless". "The Young and the Hopeless" received a 3x-platinum certification from the RIAA, landing the band on Saturday Night Live, the covers of Rolling Stone and Alternative Press, a two page feature in the New York Times, and spots on CNN and The Today Show. Good Charlotte were also hugely popular on MTV, where the Madden Brothers once served as hosts on the late night music video show "All Things Rock." Their music videos were favorites on both MTV and MTV2, with "The Anthem" going on to receive the "Viewers Choice Award" on MTV's 2003 Video Music Awards.
Chris Wilson was the band's drummer for their third album, The Chronicles of Life and Death, which was released in 2004 in two formats, one for "life" and one for "death". There were two differences between the two versions: The CD Covers represented either "Life" or "Death", and the CDs contained a different bonus track depending on which version was bought. Both versions had the same hidden track (however, on iTunes, the hidden track is listed as track 16). The singles released from that album include "Predictable", "I Just Wanna Live", "We Believe" and "The Chronicles of Life and Death". This album was considered a departure from their previous 2 albums. In May 2005, Chris left the band for personal health reasons, citing a fall out with the Madden brothers and taking them to court later in the year. Then, Benji told Kerrang! magazine that Chris leaving the band was the worst part of 2005 for him. Talk about trying to keep up appearances.
Their most recent "Noise to the World" tour with Simple Plan featured Dean Butterworth, who has previously played with Morrissey, who has now been offically endorsed as a full paid member of GC.
Their Fourth Studio Album: "Good Morning Revival" was released March 2007, and the first single "Keep Your Hands Off My Girl" is available to listen to and watch on their myspace page. They have also produced the video for the song titled "The River" which features Synyster Gates (lead guitarist and backing vocalist for Avenged Sevenfold) and M. Shadows (lead vocalist for Avenged Sevenfold).
Although fans and press argue whether the band is 'punk', the band themselves say that they are a rock band. In 2008 Billy said 'We make music, its what we love. Enjoy music for music's sake'. Billy has always shown his distaste for being considered to be in a punk band, 'I have never listened or been a fan of punk, I'm a metal head through and through'.
Their song "The Click" was used as the title track for an animated series called "Undergrads". They received a passing mention in one episode in which the title character asked what band was playing at the college's festival and he was told "Good Charlotte". His response was "do I know anything by them"?