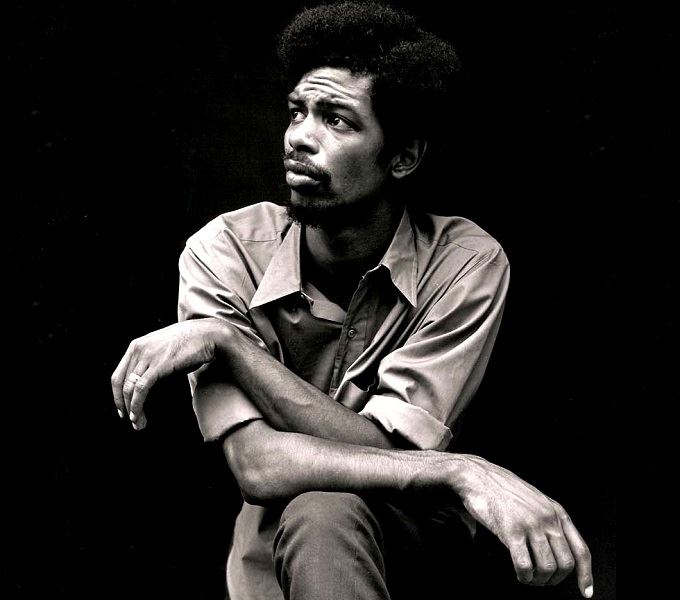 Gil Scott-Heron (born April 1, 1949 in Chicago, died May 27, 2011 in New York City) was an American poet and musician, known primarily for his late 1960s and early 1970s work as a spoken word performer, associated with African American militant activists. Heron is perhaps most well known for his poems/songs "The Revolution Will Not Be Televised" and "What's the Word - Johannesburg" a movement hit during the 1980's South Africa college and national divestment movement in the United States of America.
He began recording in 1970 with the LP Small Talk at 125th and Lenox with the assistance of Bob Thiele Flying Dutchman Records, co-writer Brian Jackson, Hubert Laws, Bernard Purdie (who later recorded "Delights of the Garden" with The Last Poets), Charlie Saunders, Eddie Knowles, Ron Carter and Bert Jones, all jazz musicians (see 1970 in music). The album included the aggressive diatribe against white-owned corporate media and middle-class America's ignorance of the problems of inner cities in songs such as Whitey On The Moon.
The 1971 Pieces of a Man used more conventional song structures than the loose, spoken word feel of his first, though he didn't reach the charts until 1975 with "Johannesburg". His biggest hit was 1978's "The Bottle", produced by Heron and longtime partner Brian Jackson, which peaked at #15 on the R&B charts (see 1978 in music).
In 2001, Gil Scott-Heron was sentenced to one to three years' imprisonment in New York State for possession of cocaine. While out of jail in 2002, he appeared on the Blazing Arrow album by Blackalicious. He was released on parole in 2003. On July 5, 2006, Scott-Heron was sentenced to two to four years in a New York State prison for violating a plea deal on a drug-possession charge by leaving a drug rehabilitation center. Scott-Heron's sentence was to run until July 13, 2009. He was paroled on May 23, 2007. The reason given for the violation of his plea was that the clinic refused to supply Scott-Heron with HIV medication. This story led to the presumption that the artist is HIV positive.
After his release, Scott-Heron began performing live again, starting with a show at SOBs in New York on September 13, 2007. On stage, he stated that he and his musicians were working on a new album and that he had resumed writing a book titled The Last Holiday, previously on long-term hiatus, about Stevie Wonder and his successful attempt to have the birthday of Martin Luther King Jr. declared a federally recognized holiday in the United States.
He was arrested October 10, 2007, the day before a scheduled (but ultimately cancelled) second SOBs performance, on felony possession of cocaine charges. However, he has continued to make live appearances at various US venues during the course of 2008 and 2009, including further appearances at SOBs in New York. He has also stated in interviews that work is continuing on his new album, which will consist mainly of new versions of some of his classic songs plus some cover versions of other artists' work.
Having originally planned to publish The Last Holiday in 2003, before it was put on hold, Canongate Books now tentatively intend to issue it in January, 2011. The book was due to be previewed via a website set to be launched on April 1, 2009, but this did not appear.
Mark T. Watson, a student of Scott-Heron's work, dedicated a collection of poetry to Gil titled Ordinary Guy that contained a foreword by Jalal Mansur Nuriddin of The Last Poets. The book was published in the UK in 2004 by Fore-Word Press Ltd. Scott-Heron recorded one of the poems in Watson's book Black & Blue due for release in 2008 as part of the album Rhythms of the Diaspora by Malik & the OG's on the record label CPR Recordings.
Gil Scott-Heron released his new album I'm New Here on independent label XL Recordings on February 9, 2010. Produced by XL label owner Richard Russell, 'I'm New Here' is Scott-Heron's first album in thirteen years.The pair started recording the album in 2007, with the majority of the record being recorded over the last twelve months with engineer Lawson White at Clinton Studios in New York. In 2009, a new Gil Scott-Heron website, www.gilscottheron.net , was launched with a brand new track 'Where Did The Night Go' made available as a free download from the site.
In 2011, Scott-Heron released "We're New Here" a remix album which was a collaboration with Jamie xx, a member of the British indie band The xx. Scott-Heron died in New York City on May 27, 2011.