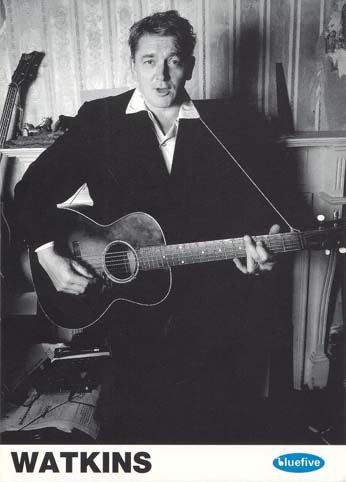 Geraint Watkins (born Geraint Meurig Vaughan Watkins, 5 February 1951, Abertridwr, near Caerphilly, Wales) is a rock and roll pianist and accordionist backing artistes such as; Nick Lowe, Dave Edmunds, Van Morrison, Mark Knopfler, Paul McCartney and Shakin' Stevens. He has also issued a number of albums under his own name, the latest being In A Bad Mood, released Sept 15, 2008

"Discerning music lovers have long known that Watkins is not only an artist and entertainer of the very top drawer but also, bafflingly, an all too well-kept secret. Being so individual his style is hard to define - I would file him as the missing link between Paulo Conte and Howling Wolf." - Nick Lowe

Although widely-known amongst his fellow musicians and enjoying airings by Bob Dylan on Theme Time Radio Hour, Watkins has had a modest public profile during his career to date. But concert goers and record buyers will have heard him play with Van Morrison, Paul McCartney, Mark Knopfler, Bill Wyman, Nick Lowe and many, many more.

Geraint's third solo album, 'In A Bad Mood' was recorded alongside Nick Lowe's recent 'At My Age' album sessions. As with Nick's album, it was recorded with Lowe, Matt Radford, Robert Treherne, Matt Holland, Steve Donnelly and others at Goldtop Studios, produced by Geraint with Neil Brockbank. The CD is the launch album for Goldtop Recordings, in partnership with Jungle.

Watkins' ability to make the simplest musical statement into a moment of top class entertainment still amazes even his closest associates. But it's not just his performances that set him apart. He's also a notable songwriter, credited with several uses of his songs in film soundtracks.

Geraint Watkins was born in South Wales more than 50 years ago. After an art school education he moved to London and has been playing with the top names in popular music ever since.

Latterly Geraint has taken time out for two solo albums that have built a loyal audience - 'Watkins Bold As Love' in 1997 (Bluefive) and 'Dial 'W' For Watkins' in 2004 (Proper). Now with ‘In A Bad Mood’ it's time for his exceptional music - which covers blues, jazz, folk and rock - to be listened to attentively and appreciated.

Tracks: Easy To Say, Champion, Unto You, Fools Like Me, Chagrin, My Love, Bourgeoisie, History, Jenni, Heart Of The City, Catch On, At Last. Cat. no: AU79CD001
Geraint on 'Later with Jools Holland, BBC2 TV:
http://uk.youtube.com/watch?v=NmvgHmvs96g