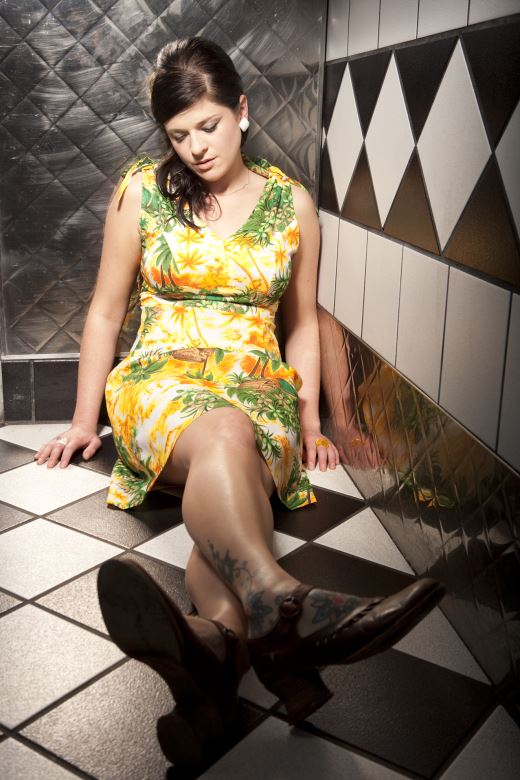 Gemma Ray is an English singer-songwriter born in Berlin, Germany who grew up in Essex, England. She's been recording from 2002 on. Her latest album "Island Fire" was released April 2012.
"Wondrous. A true alternative to the wan psychadelic folk of today's lady-pop troupe" – MOJO
"Blowing sugary femme-pop out of the water. Gemma Ray is untouchable" – NME
"By rights, Gemma Ray should be a household name. When stood next to her, Amy Winehouse is revealed to be, if not a charlatan, certainly pedestrian. This album is a rare treat indeed" – BBC
"An eerie aural kaleidoscope that conjures up thoughts of what an album by Mary Weiss of the Shangri-Las produced by David Lynch would have sounded like. Though it echoes with references to mid-'60s melodramatic pop, it's of the moment and a delight." – WALL STREET JOURNAL
"I recently saw Gemma Ray in concert and was really impressed by her unique blend of song-writing, vocals and musicianship. Not to be missed!" – JIMMY PAGE, London 2009
"Her aesthetic may be retro, but the tough, moody perspective she brings to vintage song structures feels fresh and ultra modern" – BUST
"Had Phil Spector forced his girl groups in a more noir-soundtrack direction, this might've been the result. Ray has a truly impressive feel for vintage pop flourishes, layered to lavish effect. And all those details are what you're supposed to be paying attention to, right up until the blade hits your back." SPIN
"The songs of British singer-songwriter Gemma Ray: they sound familiar, but when you stop and listen, you know you've never heard this before." PRI
"Without sounding overwrought or arch on her new album, Ray finds a winning way to warmly blend a lot of disparate pop styles" Song of the Day, NPR
"Watching her perform, with her luminous voice and oversized cutlery, there's no doubt that Ray is blazing her own silvertone trail" – Best of What's Next, PASTE
"Ray plays a cool guitar — graceful wrist-flicks of blues and rockabilly-tinted '60s pop, a mink stole in a contemporary cut — and she sings noirish ballads and boilers straight from the heart of town. Some sort of fame should follow" –RCRDLBL
"There it is. That moment. It'll send shivers right down your spine. It's a Ray teases with a familiar flavor before twisting it around to the dark underbelly, but the eeriness is tempered by a flair for the pop dramatic"- BLURT
"Disarming...swooning...with noir-ish hints of Lee Hazelwood's unearthly country-rock... Ray sits midway between Nina Simone and Isobel Campbell and is the better for it." – MOJO
"A wonderful debut album... Gemma weaves an entrancing tapestry of soul, blues and pop, full of dark themes and late-night confessions, all presented in a sultry, seductive voice. With Duffy, Adele and Beth Rowley joining Amy Winehouse in the upper reaches of the charts, it's clear girl singers are all the rage. But few, with the exception of Amy, are as raw and honest." – THE SUN
"A brilliantly brooding prospect. Like a grittier Loretta Lynn, she's from the wrong side of the tracks. Uncouthly ace." - NME
"Imagine Norah Jones on Amy Winehouse's drugs." – Q
"Gemma Ray embodies a character from a 50's film noir, delivering something that comes across as both sexy and incredibly dark, drawing everything from Nina Simone to Loretta Lynn, her luscious songs have the power to soothe the worst of heartaches." MIDEM MAGAZINE
"Gemma Ray's music defies easy categorisation...she has a clutch-purse full of sundry party tricks. You could do worse than imagine PJ Harvey in thrall to The Shangri-Las. Both Dry River and Hard Shoulder rise from minor key squalls to full girl-group majesty, while Rise Of The Runts shows she has no problem producing straight, sparkling pop." – THE WORD
"A persuasive exercise in Hitchcockian melodrama" – UNCUT
"If Audrey from Twin Peaks were to make an album, this is what it would sound like." – POP JUNKIE TV
"A startlingly good album" – CLASH
"A compelling album packed with 50's-inspired gems and rumbling, country-rock gems" – DIVA
"An entrancing blend of artfulness and accessibility, Ray's guitar twang and lustrous vocal deliver classic pop in sometimes spooky, but always compelling, hallucinogenic soundscapes." - DAILY MIRROR
"Gemma Ray has poise and clarity...and a clue or two about constructing melodic mini epics." - MAIL ON SUNDAY
"A compelling piece of work" - DAILY EXPRESS
"Gemma Ray takes old musical forms, but unlike Duffy and Amy Winehouse she reinvents them in an innovative and refreshing style that ensures she will be around in 10 years time." - IRISH NEWS OF THE WORLD
"If Pulp Fiction were remade to include a church scene, then London's queen of all things noir Gemma Ray would provide the soundtrack and possibly a part as Uma Thurman's best mate.
As it is, tonight, Islington's Union Chapel provides a righteous backdrop as she delivers a solo set of '50's-soaked urban blues. Covers of Gallon Drunk's Put a Bolt On The Door and Etta James's I'd Rather Go Blind sit handsomely alongside new material like If You Want To Rock And Roll from her forthcoming album Lights Out Zoltar! and allow Ms Ray to make a whole host of new friends" - MOJO