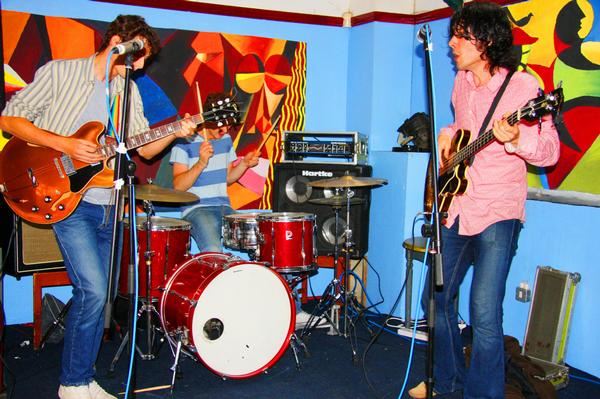 There are two UK bands called 'Free Peace'. One is a three piece rock band from Liverpool, formed in August 2008; the other a seven piece acoustic hiphop band, from Guildford, Peterborough and London, formed in 2006.
Acoustic Hiphop (Guildford, Peterborough, London)
http://www.myspace.com/fre3peace
http://www.reverbnation.com/freepeace
Free Peace are a seven member acoustic hiphop band. The current line up is: Abi Evans (vocals), Stacey Edwards (guitar, vocals), Kerry Edwards (drums, percussion, vocals), Naz Adamson (bass, vocals), Sebastian Goodwin-Day (trombone, guitar), Toby Couling (cornet, steel drum, banana shaker), James Wiseman (alto sax).
Free Peace began in 2006 as an acoustic trio with Stacey Edwards on guitar, Abi Evans on vocals and Kerry Edwards on percussion. Experimenting with various genres ranging from hip- hop and acoustic singer/song-writer styles, their compositions fused African and flamenco influences with strong hooks and an insistent vibe. Free Peace went on to study at the Academy of Contemporary Music to develop their musical careers, and this is where the fourth member, Sam Odiwe on bass, joined the group. Their new collaboration further honed their sound and style. Performing as a four-piece band around the UK and Europe they refined their sound and performance skills playing to live audiences. In April 2008 they discovered the next addition to the Free Peace family. Sebastian Goodwin- Day helped to round the Free Peace sound contributing his skills on the trombone. Subsequently they recruited Naz Adamson, replacing Sam Odiwe on bass, Toby Couling, on cornet, steel drum and banana shaker, and James Wiseman on alto sax. Their debut release, 'An Ounce of Bounce', features both bassists, and is available from the band via the myspace and at their regular monthly residency at the Bedford in Balham.
Rock (Liverpool)
http://www.myspace.com/freepeaceuk
http://loudsoul.co.uk
Free Peace is a three-piece rock band formed in August 2008 by Liverpool music maverick Edgar Jones, who writes the material, sings and plays bass. His nephew Nick Miniski is on drums and Stuart Gimblett plays lead guitar.
Their sound is loud and heavy but contains a lot of soul. Led Zep are a definite influence but The Jimi Hendrix Experience and the New Orleans soul sound are in there too. Like the great rock bands of the late 60s Free Peace is all about respecting the traditions of jazz r'n'b and soul music - something which Edgar feels a lot of the modern bands just don't do.
Edgar is something of a legend on the Liverpool music scene due to his involvement in bands such as The Stairs and cult classic tunes such as 'Weed Bus'.
Edgar has worked with some of the biggest names in music; Paul Weller, Johnny Marr, Lee Mavers to name but a few.
Free peace are currently recording their debut album 'Born too Loose' on Loud Soul records, a Liverpool indie label run by members of Edgar and Nick's family.
Free Peace supported Oasis at Heaton Park, Manchester on 6th and 7th June '09