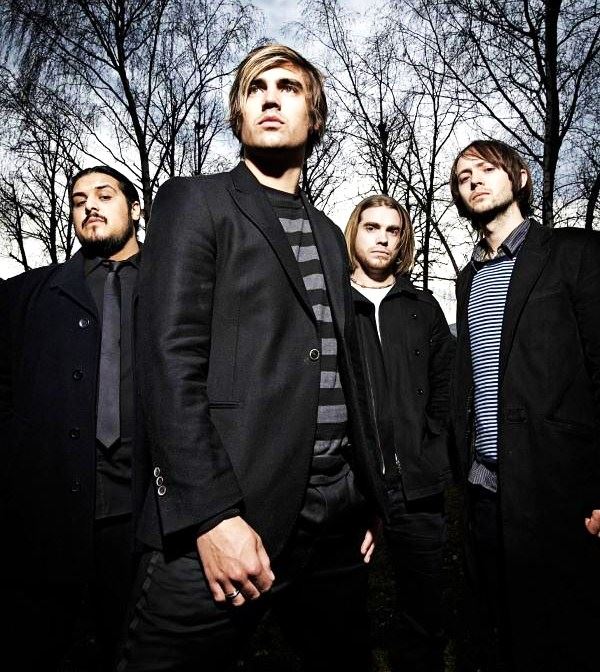 Fightstar is a post-hardcore band, formed in 2003, from London, United Kingdom. The band consists of Charlie Simpson on vocals, guitar and keyboard, Alex Westaway on guitar and also providing vocals, bass guitarist Dan Haigh and drummer Omar Abidi. They have released three studio albums, "Grand Unification" in 2006, "One Day Son, This Will All Be Yours" in 2007 and most recently "Be Human" in April 2009. Before releasing any albums the band released "They Liked You Better When You Were Dead", a 6 track EP. And in 2008 they released a compilation album consisting of b-sides and covers called "Alternate Endings". They are currently on their own record label Search And Destroy in the UK and are signed with Trustkill Records in the US.
The band are currently taking an extended hiatus and are expected to regroup in the near future to write new material.
Fightstar’s debut EP, “They Liked You Better When You Were Dead”, was released on February 28, 2005, following a rapid promotional tour of the United Kingdom. Being an EP and containing in excess of 3 tracks (it in fact contained 6 tracks, one more than shown on the track listing, the 6th being a hidden track) it was ineligible for the singles chart in the UK - whether or not this was a conscious choice on the part of the band, since it effectively negated the possibility of their first release being judged by its placing in the singles chart (and so, almost inevitably, poorly by comparison with Simpson’s former band), is a matter for debate; regardless, the release proved popular enough to warrant a reprinting on March 23, 2005. First track, Palahniuk’s Laughter, enjoyed heavy rotation on music video channels and spent many weeks in charts based on video and radio requests.
The release of Fightstar's first full length album "Grand Unification" showed a band that could not be further from Simpsons previous band Busted. With raw power, melodic guitars and hard rock hooks they showed the world that Simpson knew what he was doing when he left Busted and that they know exactly where they are going.
In September 2006, the band ended their contract with Island Records. Charlie Simpson said that "they wanted a pop album and we didn't. I've put so much into this band I don't want to start compromising now. We're thinking about going to America. The market for our stuff is much bigger over there."
In September 2007, the band released their second LP entitled 'One Day Son, This Will All Be Yours' under Institute Records. '99' was released as a free-to-download single, along with it's video on the 11th May 2007. Their next single to be released was 'We Apologise For Nothing' which had minor chart success peaking at #63 on the UK singles chart and at #1 on the UK Independant Chart.
'Deathcar' was the third song to be released as a single from the album. It was released on the new VinylDisc format and was also available for download. 'Floods' has also been released from this album.
In Autumn 2008, Alternate Endings was released, providing it's audience with b-sides, acoustic performances and covers.
The band's third studio album, Be Human, was released on April 19th 2009 and reached number 20 in the UK Album Chart. Four singles were released from the album; The English Way (3 Nov 2008), Mercury Summer (6 April 2009), Never Change (20 July 2009) and A City on Fire (21 Dec 2009). They experimented with orchestral elements and received critical acclaim for their work.
The band announced they were "taking some time off" for the remainder of 2010/11 to work on separate projects before regrouping in 2012 to begin writing a new record. A new record, however, did not eventuate. In the time away from the band, Westaway and Haigh worked on a music project titled 'Gunship,' an entity focused on making music for film. The duo completed production on a film project with Philip Koch of Lucas Film. Westaway and Haigh also completed the score for Grzegorz Jonkajtys short film The 3rd Letter along with Audrey Riley. The film picked up several awards from various film festivals across the world.
Simpson began work on a solo album in 2010. He released his EP, When We Were Lions, through Pledge Music, an organisation that helps artists raise money to record music from their fans. His debut album, Young Pilgrim, was released in August 2011. Simpson stated Fightstar would record an album again, but he planned to record a second solo album first, while Westaway and Haigh worked on their Gunship project.
In an interview with Digital spy in December 2012, Charlie Simpson confirmed his current plans to finish writing and record a second solo album in February 2013. Following an intended US release and tour in the summer of 2013 in support of this new solo record, he had then planned for Fightstar to reunite and begin writing for the band's fourth album.
September 2014 saw the band's Facebook profile updated with a new default picture and cover photo; both of which featured Fightstar artwork within an 'X' shape. On September 25, the band's official website was updated to include a countdown timer accompanied by text that simply read "News..." The timer ended on October 13, 2014; with the announcement of a ten-year anniversary show at London's Forum. A statement from the band followed: "It has been 10 years since the inception of this band and we wanted to celebrate it with a bang. We want to thank you all for your love and support over the past ten years and we can't wait to commemorate this milestone with you guys."