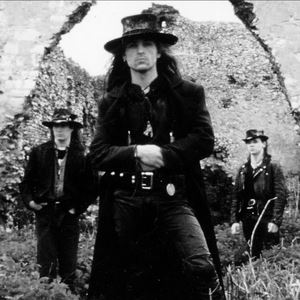 Fields of the Nephilim is a gothic rock band, active throughout the 1980s. They formed in Stevenage, Hertfordshire, UK in 1984. Carl McCoy, Gary Whisker, Tony Pettit and brothers Paul Wright and Alexander 'Nod' Wright were the starting lineup. Peter Yates joined by the time of their first release, replacing Gary Whisker.
The band's name refers to magnetic fields and the biblical Nephilim race. Their sound was innovative in the gothic scene, incorporating heavy metal elements to make a hard, bass and guitar driven sound underneath McCoy's growled vocals. Lyrically, they incorporated mystical themes, especially relating to Sumerian Mythology, Hebrew Mysticism, and Aleister Crowley.
Their debut release the "Burning the fields EP" was released in 1985 showing the raw power and melody that began to earn them a big underground following. They signed to Beggars Banquet in 1986 to release "Power" and "Preacher Man". Both singles were alternative rock hits, and "Dawnrazor", their debut album did similarly well. "Dawnrazor" was a powerful, albeit standard gothic rock collection of modern horror-film themed songs, standout songs were "Dust" (a live favourite), "Vet for the Insane" a quieter melodic showcase for Yates' guitar and McCoy's gruff, dramatic vocals, and the powerful ten minute title-track.
The single "Blue Water" was subsequently released reaching the main UK charts for the first time, and making a big impact on the Independent chart listings for their label Situation Two. The following year the single "Moonchild" was released followed by their assured second album "The Nephilim". Displaying a more confident and polished sound, the band cemented their status as one of the biggest underground acts on the circuit. The standout tracks were "The Watchman" (later released as a single), "Phobia" (a live favourite), "Love under will" and the anthemic "Last exit for the lost". The following live dates with the more sophisticated light show and effects, and of course the larger venues, highlighted their inexorable rise in popularity and confidence.
"Psychonaut" was released in 1989; this ten minute track indicated a slight shift for the band toward a more experimental and intense sound. This single/EP was a candle-bearer for the polished and highly produced "Elizium" album. Produced for the first time by ex-Pink Floyd producer Andy Jackson (taking over from previous band producer Bill Buchanan), the opus represented the band at the zenith of their creativity and powers. The album was preceded by the single "For Her Light" which again followed the bands custom of charting highly one week courtesy of their army of followers, then dipping out of the chart listings the next.
To the shock of their following, Carl McCoy left the band in 1991, and in a subsequent interview uttered the immortal words "I am the Nephilim...". The remaining band members formed Rubicon, while McCoy began a new group called Nefilim. "Zoon" was released in 1996, an album that largely disappointed followers of his former band. The collection of mostly hard metal and speed-metal tracks pointed in a new direction, but one that ultimately still awaits a follow-up.
The band reformed in 1998, and a collection of out-takes and assorted unreleased recordings, "Fallen" was released in 2002 exciting many of the followers who had grown used to reading about imminent new material, but then disappointed as the tracks were definitely not new material. The album has been disowned by the band who insist that the album was released by their old record label without their wishes or permission.
Live dates penciled in were canceled in 2003 as the band insist they will only tour with new material, refusing to join the other bands of their generation touring to old audiences playing old material. The anticipation amongst their following - The Watchmen, grew awaiting new material, taking their individual and intense sound and lyrics to new spaces and dimensions.
A new album "Mourning Sun" was released in Europe on November 28, 2005, with the North American release scheduled February, 2006. The hitherto hinted at reformed line-up hadn't materialized, and the Carl McCoy led and penned collection of new material received mixed reviews.
In 2007 FotN had gigs in London and at Ville Valo's Helldone Festival in Finland. In 2008 they've played in Warsow and Athens and headlined the Wave Gotik Treffen Festival in Leipzig, Germany. They also performed at M'era Luna 2008 in Germany. At all gigs Carl McCoy was the only member of the original line-up.
The Wright brothers have released two albums and an EP under the name Last Rites playing an ambient sounding dark rock. A third album is currently planned. Tony Pettit is currently a member of the goth rock/metal outfit NFD, also with two released albums. Peter Yates is featured on both NFD-albums as a guest musician.
In 2009 Tony Petitt under the name The Eden House released a collaborative album "Smoke and Mirrors" featuring former members of Fields of the Nephilim Nod Wright, Peter Yates and Paul Wright as well as former producer Andy Jackson.
Official site: http://www.fields-of-the-nephilim.com