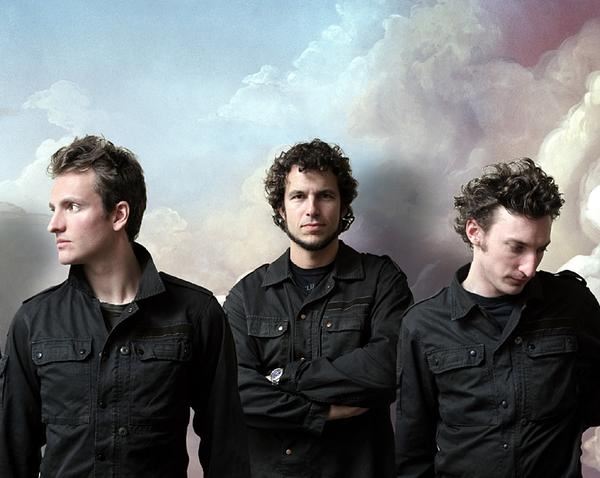 Fiction Plane is a rock band from England. Originally formed in London under the name Santa’s Boyfriend in 2001, Fiction Plane is currently comprised of lead vocalist, guitar and bass player Joe Sumner, guitarist Seton Daunt and American drummer Pete Wilhoit.
Fiction Plane’s first major label release, Everything Will Never Be OK, with MCA Records, was released in the US in March 2003 with the single "Hate". Shortly after the album’s release, Bloomington, IN drummer Pete Wilhoit joined the band.
In spite of positive critical acclaim for the group, including being named a ‘Breaker’ Artist by AOL Music in March of 2003, MCA folded and the band moved over to Geffen records. In 2005 the band released a 4-song EP entitled Bitter Forces and Lame Race Horses on the Geffen imprint label Everybody's Records.
In 2006, Fiction Plane made a brief move to Interscope Records and parted ways with founding member and bass/keyboard player Dan Brown[. Joe Sumner took over on bass and the band started working on a new album, Left Side of the Brain, which was released on Bieler Bros. Records on May 22, 2007. Behind the success of the singles "Two Sisters" (a popular single in France, Belgium and Holland) and "Death Machine" the album rose all the way to #46 on the Billboard Heatseeker Album Chart.
On January 23, 2008, Left Side of the Brain was released in Japan through Sideout Records with two bonus tracks: "Drink (acoustic)" and "Put On Your Shoes."
In April 2008, a limited tour edition of Left Side of the Brain was re-released in France through XIII Bis Records, containing five bonus tracks "VIP fast", "Coolest Kid", "At Ease", "Sleepwalker", "Drink (acoustic)"), a video clip ("Two Sisters"), and a hidden track, "The Circus Trouser Enthusiast". Four of the bonus cuts were unused demos recorded in 2006. "Sleepwalker" is an early version of what would become "Anyone," the official album’s first track.
On March 23, 2009, the band released its first-ever live DVD and CD package, simply entitled Paradiso, through XIII Bis Records. It was recorded on December 7, 2008 at the band’s sold-out performance in Amsterdam and then mixed by Ash Howes and mastered by Andy Walters at the famed Abbey Road Studios in London. Special features on the DVD include the unedited version of the “It’s A Lie” video, and a photo gallery of images taken along the band’s touring journey.
In February 2010, Fiction Plane completed the recording of their latest studio album, Sparks, which has an initial European release slated for May 3rd, 2010 on Roadrunner Records. The UK and US album releases are set to follow in the Fall. Produced by Paul Corkett, whose collaborations also include artists the likes of Nick Cave, Bjork and Placebo, Sparks is said to include both large anthems and eclectic tracks.
Fiction Plane has performed before hundreds of thousands in arenas and festivals all across Europe, Asia and North America, and have headlined their own largely sold out European tour.
In 2005, Fiction Plane was the support act for Sting's Broken Music Tour, which took the band all over Europe playing 29 shows in 25 countries.
Fiction Plane was then hired to support The Police on the North American, European, Australian/New Zealand, and Asian legs of their 2007 Reunion Tour, playing 87 shows.
In support of the album Left Side of the Brain and the singles "Two Sisters" and "Death Machine" Fiction Plane performed on The Tonight Show with Jay Leno and Jimmy Kimmel Live in 2007.
In the Spring of 2008, Fiction Plane toured America with The Bravery and Your Vegas. The band also toured the UK in March supporting The Feeling and supported 311 and Snoop Dogg on the 2008 Summer Unity Tour in the US.
In December, 2008, Fiction Plane performed a largely sold-out run through Europe, culminating in selling out the legendary Paradiso in Amsterdam.
On February 27, 2009, Fiction Plane previewed five brand new songs at a concert at Arlene's Grocery in New York City. The song titles were "Telephone Unknown," "Humanoid," "Denied," "Zero," and "Contagious." “Humanoid” and “Zero” are both currently featured in the track listing for their upcoming studio album Sparks.
Fiction Plane has also been featured on several high-profile European music festivals, including Paaspop and Pinkpop in The Netherlands, The Vieilles Charrues in France, Rock Am Ring and Rock Im Park in Germany.
In support of their new album Sparks, Fiction Plane recently revealed that they will be performing this summer at a number of major European rock festivals including the Meribel Little World Festival, the Benatska Festival in the Czech Republic and Sautrock in Austria.
The band's members are:
Joe Sumner (lead vocals, bass)
Seton Daunt (guitar)
Pete Wilhoit (drums)
Former members:
Dan Brown (bass, keyboards) - until 2006
Olly Taylor (drums) - until 2003