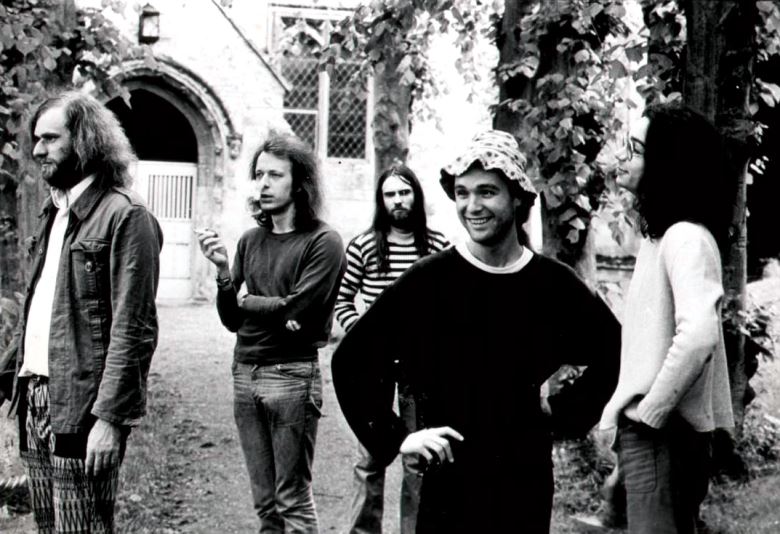 Several bands are called Faust:
Faust is a German krautrock band, originally composed of Werner "Zappi" Diermaier, Hans Joachim Irmler, Arnulf Meifert, Jean-Hervé Péron, Rudolf Sosna and Gunter Wüsthoff, working with producer Uwe Nettelbeck and engineer Kurt Graupner. The group formed in Wümme, Germany in 1971 and soon began recording their debut, "Faust", which sold poorly, but established a devoted fanbase. With a series of early 1970s releases, Faust became one of the most significant bands in the genre that would eventually be known as Krautrock.
Faust became one of the first acts to sign to Richard Branson's Virgin Records, who issued the band's "The Faust Tapes" at the price of a single, 49 UK pence, leading to a chart placing in the United Kingdom.
Faust were arguably the most radical of the groups of their era, using advanced studio techniques and electronics in a way that opened up new possibilities for studio composition. At the time they may not have appeared to have had the same impact as a number of their German peers (notably Kraftwerk, Can and Tangerine Dream), but they are increasingly recognised as the most far-sighted of the German groups of that era.
Faust broke up in 1975 after Virgin had rejected their fifth album (some of the recordings later appeared on the "Munich and Elsewhere" album), but reissues of their recordings and various additional material through Chris Cutler's Recommended Records maintained a level of interest. The groups' activities between 1975 and 1990 remain shrouded in mystery.
In 1990, members Irmler, Diermaier and Péron reunited for performances, including touring the United States for the first time. They have continued to perform in various combinations and with various additional musicians ever since.
Péron left the group in June 1997. From mid-1997 to 2004, Faust tours as Zappi W. Diermaier, Hans Joachim Irmler, Steven Wray Lobdell, Lars Paukstat, Michael Stoll.
Diermaier and "art-errorist" Péron rejoined in 2004 by immediately recording Trial and Error, a DVD released in 2007 by Fuenfundvierzig Label. Zappi proposed to Péron to start a "new" Faust together with Olivier Manchion and Amaury Cambuzat from Ulan Bator.
Faust now exists in two completely different incarnations, both active and each reflecting different aspects of the original group.
Uwe Nettelbeck, Faust's creator and producer, died 17 January 2007.
Faust's influence has been wide-reaching, and continues to this day, most notably in the music of post-rock, noise, and electronic artists.
Faust is early 90s heavy metal band from Subotica, Serbia (ex-Yugoslavia). They released two albums in their homeland, and one in Hungary.
Faust is a Symphonic Metal band from Russia.
They released a demo on the old mp3.com. Original tags of these demos scrobble as Faust Band
Faust is a german band with members from both Noie Werte and Kraftschlag.
Not to be confused with the legendary Krautrock institution, nor several other lesser-known heavy metal bands, Milan, Italy's Faust are the death metal brainchild of vocalist/guitarist Aleister Demon, whose primary claim to fame -- if one can call it that -- has been his long service as a touring guitarist for Norwegian black metal mainstays Ancient. But because he only linked up with Ancient in 2001, this doesn't account for the fact that, despite founding the project as far back as 1992, Aleister's only Faust-associated music until that decade's end was comprised of a 1993 demo and contributing a song named "Purity in Evil" to 1994's Screams from Italy, Vol. 1 compilation. In fact, Faust didn't unveil its first official release until 2001 -- that being the aptly named …And Finally Faust mini-CD, but this featured just Aleister and a drum machine, not a full band. That development would have to wait until 2009 and the recording of Faust's first actual album, From Glory to Infinity, which saw Aleister surrounded in a session capacity by guitarists Ghiulz Borroni (Profanatum) and Luca Princiotta (Doro, Blaze, etc.), drummer Dariusz "Daray" Brzozowski (Dimmu Borgir), and journeyman bassist extraordinaire Steve DiGiorgio (Sadus, Death, Testament, Autopsy, etc.).