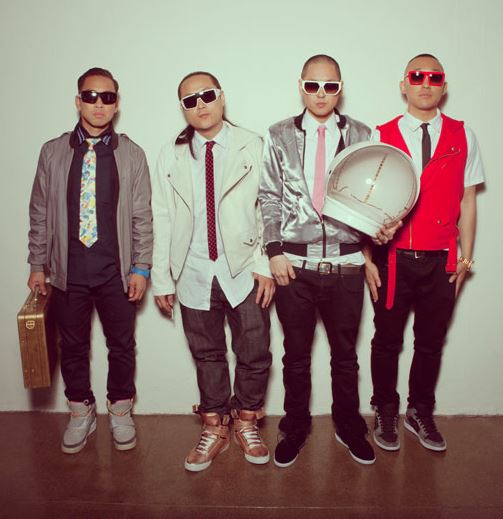 The Far East Movement (also known as FM), hailing from the clubs and streets of Los Angeles, California, United States, are one of the freshest crews representing the next generation of artists and “fly music.” Members Kev Nish, Prohgress, J-Splif, and DJ Virman have created a huge industry buzz with major companies, radio stations, and club DJs worldwide through their international appeal and energetic live shows.
Finding their inspiration from the diverse city blocks and night club scene of Southern California, FM has built a strong internet fan base and a new lifestyle brand for the next generation of youth around the world. “The Far East Movement is the name for our music, lifestyle, and our party. For the diverse music fan that hits up 3 clubs in 1 night, tuned to the racing scene and fashion, and back on the computer religiously checking blogs and sites for anything related to that.”- FM
FM has embarked on 2 World Tours (including the USA, South America, Canada, Europe and Asia) and recently featured on the 35 city Party Rock Tour with LMFAO, signed distribution deals in Japan and Korea (Avex Network and JF Productions respectively), garnered multiple features on MTV World, and also featured music on worldwide media such as FOX’s “So You Think You Can Dance”, MTV’s “America’s Best Dance Crew”, ABC Family’s Lincoln Heights, CBS Primetime shows “CSI: Miami” and “CSI: NY”, multiple placements on HBO’s “Entourage”, “Fast & Furious Tokyo Drift” and “Finishing the Game” (a featured film at Sundance 2007). FM was also the first Asian act to perform at the Sundance Film Festival’s prestigious Music Café Gala hosted by ASCAP, and was also recently a featured act at the Cannes Film Festival in France. As producers, FM worked with Jin the Emcee to create ABC JIN, an award-winning, platinum album that broke records for first week sales in Hong Kong.
In the world of marketing, the Far*East Movement has been sought out by major companies to endorse their products. They worked with McDonalds as celebrity judges and were featured artists for the national Big Mac Chant campaign and spokespersons/tour headliners for McDonald’s Lost Ring campaign during the 2008 Olympics. FM was also a featured artist for Verizon Wireless’s LG Dare ‘Touch One’ Campaign. They’ve also co-created a series of live concerts with Wong Fu Productions to benefit community outreach called the International Secret Agents with endorsements by JCPenney and Verizon.
Far East Movement’s single “Girls On The Dance Floor” has taken over clubs and radio stations around the world, reaching #1 on Los Angeles radio and charting on the Billboard Charts. On February 12th, 2010, the Far East Movement officially signed their first major label record deal with Cherrytree / Interscope Records. After 2 independent album releases and a rigorous tour schedule, the Far East Movement is in the studio working with the Stereotypes (Production team) on their 3rd album and first major release in 2010.
The original members of Far East Movement, Kevin Nishimura (Kev Nish), James Roh (Prohgress), and Jae Choung (J-Splif), grew up in Koreatown, Los Angeles, California. They were close companions in high school and shared a passion for music together. The trio promoted their music online and began performing at local clubs and events in Los Angeles; soon, they began their musical career with the name "Emcee's Anonymous" by 2001. However, they later changed it to Far East Movement or FM, originating from a song that they produced with the same name. In 2003, they organized together an event called "Movementality" in Koreatown, LA, featuring ten different performances with all the proceeds sent to a local youth drug rehabilitation center.