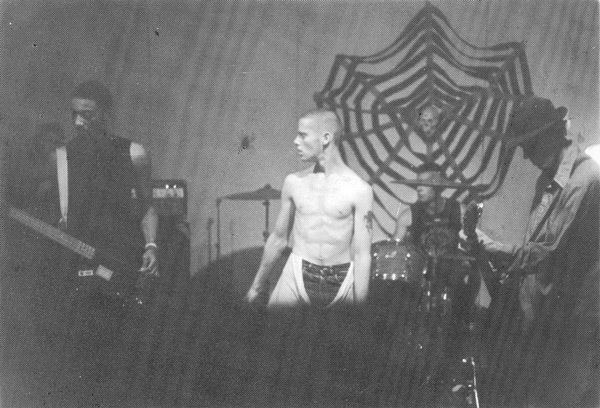 There are at least 5 acts called Fang:
1. The first rumblings from Bay Area street demons Fang came around '80, with the experimental psychedelic 2-song EP "Yukon Fang," the brainchild of guitarist Tom Flynn. After this record's release, vocalist Sammy (a.k.a. "Slammie," "Sammytown") was recruited from a punk band called Shut Up, and the classic "Fun With Acid" was recorded. This appeared on the '82 Alternative Tentacles/MRR comp. double LP "Not So Quiet On The Western Front," soon followed by the 8-song 12" EP "Landshark," in '82.
Few punk records of the era smack of such drunken, drug-fueled nihilistic chicanery, and the influence the "Landshark" record has had on West Coast punk rock is undeniable. Classics like "Law & Order," "Destroy The Handicapped," and "Skinheads Smoke Dope" leap from the grooves of the record reeking of beer, wearing steel-toed boots, and wielding a boxcutter. This record should have come with a set of brass knuckles and some blotter acid.
After contributing such tracks as "They Sent Me To Hell C.O.D." to the CD Presents '84 compilation LP, Fang hooked up with Boner Records and contributed two songs, "Johnny Puke" and "Better Off Dead" to the Boner compilation "Them Boners Be A-Poppin'" (also feat. such skate rock heroes as Tales Of Terror, Bl'ast!, Special Forces, Verbal Abuse, and the Boneless Ones), before putting out another 12" EP for Boner, "Where The Wild Things Are," named after the famous children's book by Maurice Sendak, from which it borrows its cover art.
Fang then hit the road for Europe and, after a line-up change, recorded the '86 LP "Spun Helga," then in '87 another full-length, "A Mi Ga Sfafas/Get Nothing & Like It," also for Boner. Around this time, another LP was recorded, the still-unreleased (maybe one day) "Pissed-Off Buddha."
After some legal problems and a break Fang reformed in the late '90s and returned with a new LP, "American Nightmare," featuring such classics as "Eat A Vegan," with Jim Martin of Faith No More on guitar. Fang has transformed from being the gnarly drunk scumbag punk band everyone loved to hate, to being considered legitmate old school heroes... and their influence cannot be denied. Covers of Fang songs by bands that grew up listening to them have made the rounds over the years - Mudhoney, the Butthole Surfers, even Nirvana, Green Day, and Metallica have done live and studio Fang covers.
Sammytown currently sings for a band called The Disciples, and Fang still rips it up for the crowd live once in awhile.
2. Fang were a band from Banyoles, Catalonia formed in 1997 by Mariona Aupí and Jaume Garcia. They released four albums: My Weakpoint, My Black Dress and Monster were all using English lyrics. Their last album, Dos Vidas, was performed in Spanish.
Their sound is a mixture of rock and electronica, generally dark and defined by Mariona's silky voice.
The group is now defunct.
3. A Japanese Doujin artist that releases on the Sound.AVE label. He also has a few tracks on Touhou remix cds.
4. Fang are an NZ-based indie rock group. Since their original formation in 1998 Fang have released three albums (The Origin Of Species 2000, Somewhere Out There 2002 and Swim Up Stream in 2004) and an EP (Employee of the Month 1999), two videos and played numerous shows, touring every few years. Fang includes members from groups such as Superette and The Fanatics (NZ).
5. Fang is a Dutch punkband from Arnhem, Gelderland. They played from 1983 till 1985.